from Wikipedia, the free encyclopedia
wikipedia (digit sequence 945473342 ) in MFV

The tone dialing ( DTMF ), also frequency selection process is in the analog telephone technology common Wähltechnik and since the 1990s with analog subscriber lines , the most commonly used technique for transmitting the number to the central office or PBX .

The method was developed by Western Electric in the early 1960s and used commercially by Bell System , a forerunner of today's AT&T , in 1963 in their US telephone network under the US brand name Touch Tone . In 1988 the method was specified by the ITU-T under the designation Q.23.

Numbers or keys that have been dialed represent dialing signals on the telephone's analog connection line. A dialing signal, generated by a modem for parallel transmission , is represented in DTMF by a superposition of two sinusoidal tone signals that are recognized by the exchange .

With the introduction of Touch Tone in the USA in the 1960s, the standardized key layout known today was also introduced. The two tone frequencies result from the position of a key.

Each row represents a low note, each column a high note. When the "5" key is pressed, a tone results from the superposition of the tone frequencies 1336  Hz and 770 Hz.

A sequence with all the notes in the table can be found here ? / i . First the four lines, then the four columns are played. If the tension value of the high note is less than that of the low note, it is called a twist , and conversely it is called a reverse twist .

The following values ​​apply to frequency tolerance (in % ), signal duration (in milliseconds ), twist (in decibels ) and signal interruption (in ms) according to ITU-T Q.23 and Q.24:

The greater the tolerance, the better even tone generators that do not conform to the standard are recognized. At the same time, however, the risk of incorrect identification also increases. For example, the human voice, in particular the female voice, can also be unintentionally recognized as a DTMF tone.

70 milliseconds is usually selected for the duration of a tone (as with ZVEI tones) so that the switching facility can reliably recognize the tone received. We recommend a duration of 50–100 ms with pauses of 20–50 ms between the tones for tone or digit sequences.

The generation of the DTMF tones by means of two sinusoidal oscillators for the column and line frequency is relatively easy. In the past, analog resonant circuits were used to detect the individual frequencies , later so-called switched capacitor filters in IC technology, and from the 1980s onwards using specially designed integrated circuits and digital signal processing . In the context of time-discrete signal processing, the Goertzel algorithm is usually used because of its simplicity , an algorithm for recognizing individual tone frequencies (spectral components) based on the discrete Fourier transformation .

DTMF is an in-band signaling method , which means that the signals are within the normal voice frequency band and can be overheard by the person making the call. Therefore, natural noises (for example music ) could also be perceived as a signal by the exchange. The frequencies of DTMF signals were therefore chosen in such a way that they generate dissonances which are very unlikely to occur in the vicinity of a telephone . On the other hand, dissonant frequencies can be detected particularly selectively due to the lack of resonances. 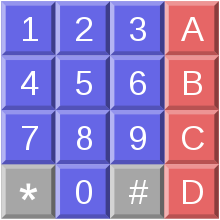 Some exchanges with simple technology, especially those from North American manufacturers, no longer accept multi-frequency commands during an existing connection. To control network-side service features (such as three-way conference or toggling ), the existing connection must first be switched to control mode by a defined interruption, which is referred to as flash or hook flash . The inquiry button is often provided for the defined interruption . ISDN connections and other digital telephone systems such as VoIP do not require DTMF to transmit the telephone number to the exchange, since with these systems the individual digits of the telephone number are transmitted as a bit sequence and not in the audio tape. Most end devices, however, also transmit DTMF tones in parallel, for example to enable the control of speech dialog systems or answering machines.

The keys "A" to "D" are rarely used today and are also rarely found on a telephone keypad. They were within special telephone systems, e.g. B. from Siemens or Telefonbau and Normalzeit , used for the control of system-internal special functions (e.g. 'automatic callback', 'call diversion' and 'software lock ') and for programming the call forwarding device GEDAN . In addition, it was also used to determine the priority of a call in the US military's Automatic Voice Network (AUTOVON) telephone system, which has since been abolished . At the first digital exchanges in Germany, you could use the tone sequences "AC2" to "AC9" to call up the announcements stored in the exchange (e.g. "No connection under this number", "This connection is temporarily unavailable" or "Switchover." executed "etc.).

When Blue Box dialing other frequencies were used.

In order to enable users of Internet telephony (VoIP) to use teledialog systems or answering machines, procedures were developed to be able to transmit multi-frequency tones not originally (based on the voice channel "inband"), but encoded in data ("outband"). Especially when using audio codecs with narrow-band voice transmission and strong compression, which are optimized for the transmission of voice and not of audio signals, the transmission quality of the audio frequencies generated by the telephone may suffer and the signals may no longer arrive at the remote station in sufficient quality to be able to be interpreted safely and reliably. Another advantage of data coding is that the direct transmission of data causes only a fraction of the data traffic that is required to modulate the same data in the voice channel into tones. With the frequently used SIP protocol, the following modes are usually available:

Not all Internet telephony providers provide information on the transmission methods supported. Mixed operation (RTP or SIP signals are usually transmitted in parallel with in-band tones) can increase compatibility or lead to new problems, because some Internet telephony providers do not filter "the original DTMF spectrum cleanly from the actual voice data stream", which leads to the fact that individual keys are recognized twice. The manufacturer AVM recommends its customers to use the in-band setting, but advises against the use of in-band in the same manual if tones are not recognized at all. (However, switching off compression, called "fixed network quality" at AVM, can increase in-band compatibility.) The settings Automatic or INFO, RTP or In-band (the latter for AVM Fritzboxes ) can only be used to a limited extent for troubleshooting because the user does not have any Has an influence on the choice of the transmission method and the possible mixed operation. Some devices use the protocol suggested by the server, and if none is transmitted, in-band. Or a preset protocol of the SIP adapter is used that neither the caller nor the SIP server can influence.

DTMF tone generator, front and back

The system known in German-speaking countries as MFV was developed as a replacement for the comparatively slow pulse dialing method (IWV) at Bell Laboratories . The pulses required for the pulse dialing process could easily be generated by a dial mechanism and interpreted by relatively simple electromechanical assemblies, the dialers (later by electronic circuits); Electronic circuits are required for DTMF (see also keypad ).

After the advent of electronically controlled answering machines v. a. In the 1980s, small DTMF tone generators, mostly in the form of key fobs , were widespread in order to be able to control the remote inquiry function from public telephone booths, which were often still preset to pulse dialing. In addition to the keyboard (mostly made of rubber keys ) and a button cell battery, they contained a circuit board with circuits and a loudspeaker on the underside. This was held over the mouthpiece of the telephone receiver while the sound was being generated in order to be able to transmit the PIN code and the control signals to the other end.

In Germany, all analogue public exchanges were replaced by digital ones in the 1990s. These support both DTMF and pulse dialing and can recognize the dialing method used by a connected telephone. However, other countries still have older switching systems, so that new telephones that are produced for the international market continue to support the old IWV so that they can also be switched on there.

Most modern private telephone systems for analog end devices support both dialing methods for reasons of downward compatibility . However, there are still old telephone systems in operation that only support pulse dialing, just like there are systems that are only suitable for DTMF.