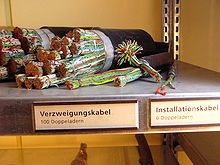 Main cable, branch cable and installation cable with 2000, 100 and 6 pairs

The subscriber line (in Germany TAL or Asl abbreviated, in Austria local loop ; English local loop ), also outside line or colloquially last mile called, is within a phone network connection between the local exchange of the network operator and the telephone connection of the service user ( subscriber , subscriber ) within the House.

The TAL is a cable , which is typically made of a copper wire pair (CuDa) per participant (i. E. Two electric wires ) composed. In the old federal states of Germany, two pairs of wires, i.e. a cable with four wires ( star quad , four electrical lines), were routed per participant.

The subscriber line has in the liberalization of a telephone network an important role, since they can not be very difficult to replace as a single piece or by alternative providers, and usually by a local access network - monopolist is controlled.

A regulatory authority ensures that the incumbent operator's wholesale services are appropriately charged so that competitors can gain access to the customer's connection in a cost-effective manner . The competitors' options for gaining control of the local loop and the customer's connection consist of the complete unbundling of the local loop , line sharing - each with collocation at the main distributor location - and bitstream access , which requires less costly network interconnection and where other technology ( DSLAM and concentrator network ) from the established provider is also used in accordance with the individual specifications of the competitors. Connection lines via multiplexers cannot be developed by competitors via main distributor collocation.

In the case of other preliminary services such as call-by-call , preselection (provider code) or DSL connection resale , however, the connection remains under the control of the ex-monopoly and the subscriber can only use the services of third-party providers via the connection provided by the established operator.

Alternatives to the individual subscriber line

Instead of using the subscriber line of the telephone network, telephony and Internet access can also be implemented via Ethernet , cable modems , radio ( Wireless Local Loop , Wimax ), cellular radio or the power line ( PowerLAN ). These alternative connection options have been used more and more since the 2000s.

Internet use via the subscriber line

The subscriber line can be upgraded with newer technologies such as DSL in order to enable fast internet access in addition to telephone calls . From the DSLAM location to the network termination at the subscriber, the TAL must be designed as a continuous single copper pair without a multiplexer and the cable length may only be a few kilometers , depending on the wire diameter, xDSL method and desired data rate, due to the signal attenuation . In the course of the migration of the conventional circuit-switched fixed network to an IP -based Next Generation Network , all connection lines in the access network will be expanded to be DSL-compatible in the long term.

During the expansion of the telephone network in the new federal states in Germany, optical fibers were already laid as subscriber lines in specially selected local networks and equipped with a HYTAS system ( OPAL ) that was not data-capable at the time , with the result that conventional DSL technology cannot be used here and other access techniques must be used. Outdoor DSLAMs have been used by Deutsche Telekom since 2005 to be able to offer VDSL .