An electrical line is an object or system for the transport of electrical energy and signal transmission in wired communications technology and wired high - frequency technology . It is part of an electrical circuit or network and thus connects the power source and consumer. For the transport electrons flow as a conductor current . For a low voltage drop or low transport losses, the conductive material should have a high electrical conductivity , for which some metals are particularly well suited. The cross-sectional area of the conductor must take into account the permissible current density . The technical execution of lines is based on the findings of line theory . 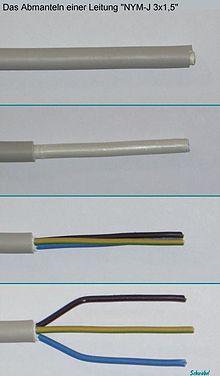 Structure of a sheathed cable. In the second picture, the outer coat has been removed. You can see the soft plastic compound that serves as a filler to hold the three individual wires in place.

Electrical lines consist of metallic electrical conductors , usually in the form of wires or litz wires , but also of strips or rails made of copper , aluminum or, more rarely, of steel, as well as their insulating sheathing. If several mutually insulated conductors (veins) are combined, they are referred to as lines or cables.

A single conductor encased with an insulating material within a cable or line is called a wire . Cables and lines have in common that the inner, mutually insulated wires are protected from the surrounding medium by a common jacket .

Under cables is understood insulated electric conductors or lines, the fixed installation can be, and whose outer protective shell is resilient (as opposed to lines) so that they can be laid in the ground and under water.

Lines in which the ambient air acts as an insulator are called overhead lines . They are hung on insulators.

The term electrical line also generally refers to a low-resistance conductive connection between electrical components, regardless of size, material and design. The latter is determined by the requirements for dielectric strength , load capacity through current , the frequency and the environmental conditions to which the cable is exposed.

The electrical properties of an electrical line are described by line coatings , wave impedance and dielectric strength . The cross-sectional area influences the line resistance and the heating relative to the current density. Other important properties of an electrical line are the permissible values ​​for the minimum bending radius, the maximum tensile strength and the temperature resistance of the insulating materials.

A distinction is also made between lines and cables for fixed installation and lines for the connection of portable equipment, which are designed as flexible lines that contain strands as conductors.

Cables for fixed installation are divided into single-core wiring cables (plastic core cables, jumper wires , bell wires , busbars), ribbon cables (insulated conductors lying flat next to one another, connected to one another by a plastic or rubber web) and sheathed cables.

The core insulation, like the sheath material, often consists of PVC or rubber (e.g. SBR , CR ). In the case of flexible lines, there are twin lines, rubber hose lines, plastic hose lines and silicone vein cords.

A distinction can also be made between lines in power lines, lines for alarm and signaling systems, and lines for data networks.

Lines for the transmission especially with high electrical power are high-voltage lines in the form of overhead lines or cables. In the case of overhead lines, the conductors are also referred to as ropes ( conductor cables , earth cables ) and are attached to insulators using special suspensions . Overhead lines are overhead lines for supplying electric vehicles via a pantograph . Three-phase current lines are mostly used as the technical design of high-voltage lines . As an alternative, there are direct current long-distance lines and lines for single-phase alternating current , the latter in particular for low-voltage and traction power lines . Hybrid lines for combined transmission are also common.

Busbars are used to supply power to fixed consumers with high electrical power at low voltage (e.g. electrolysis ). They can carry large currents (guide value for continuous current 100–3000 A, for direct current up to> 10 kA) and are manufactured with a rectangular cross-section of 12 mm × 2 mm to 200 mm × 10 mm, more rarely with a circular cross-section. In view of the problem of dissipating the heat from the electricity , the rails are not insulated. Flexible cables for harsher operating conditions are current bands .

The term power rail has a further meaning for the power supply of electrically driven rail vehicles and other mobile power consumers as an alternative to the overhead line.

A special form of the electric wire are busway systems according to DIN EN61439-6: For current ranges from a few amperes to several kilo-amperes electric power can be transmitted and distributed. As a rule, copper or aluminum flat bars are used as conductor materials, which are insulated from one another by air and / or solids made of plastic. In order to tap energy decentrally from busbar trunking systems, tap-off boxes are plugged into the system, which can be connected to external consumers via internal protection components (e.g. circuit breakers or fuse elements).

In communication technology, the term line stands even more generally for a signal transmission path that may not even have to consist of an electrical conductor in the actual sense. A typical example of a line for signal transmission is the subscriber line , which is usually physically located within telephone cables . A telephone connection cable or a network cable, on the other hand, is not just a model electrical line .

Due to the behavior of the electric current at high frequencies, lines or cables have a special structure for such applications. Examples are coaxial , stripline , Litz , leaky cables and waveguides and other waveguides . As a rule, no arbitrary terminating resistors may be used in order to avoid mismatching with undesirable effects such as reflections . At low power levels is mostly performance adjustment chosen so but the efficiency is limited to 50%.