The gap is called an insulator or dielectric . The dielectric can consist partly or completely of air (see air line ). The outer conductor is usually protected from the outside by an insulating, corrosion-resistant and waterproof jacket. The structure of the cable determines the line impedance as well as the frequency-dependent cable attenuation .

“Flying” coaxial cables without permanent installation are often used as antenna cables for radio or television reception or as cinch connections, especially in the audio sector.

Common coaxial cables have an outer diameter of 2 to 15 mm, special shapes from 1 to 100 mm. There is also a coaxial design of overhead lines, the trap line . 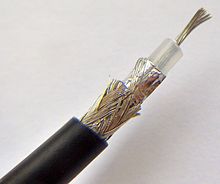 Flexible coaxial cables usually have inner conductors made of thin, braided or stranded copper wires and cable shields made of likewise braided copper wires, whereby the shield can be supplemented by a foil. The braid may then have a lower degree of coverage. Rigid coaxial cables for high performance or high shielding factors are constructed with a rigid outer conductor in the form of a tube.

A variant of the coaxial cable is the slotted cable , which is used as an elongated antenna. The split cable is a coaxial cable with incomplete shielding. Its outer conductor has slots or openings through which HF power can be emitted and absorbed in a controlled manner over the entire length of the cable. 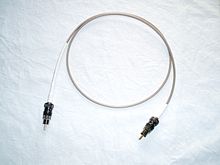 Coaxial cables are suitable for transmitting high-frequency, broadband signals in the frequency range from a few kHz to a few GHz. These can be high-frequency radio signals, radar signals or simply measurement signals in a test laboratory. Coaxial cables were also used for Ethernet networks until the 1990s. For some applications, for example for microphones, a DC voltage is occasionally also transmitted in order to supply a consumer with electrical energy ( remote supply , tone wire supply , phantom supply ).

Coaxial cables are used to transmit high-frequency asymmetrical signals; the outer conductor usually carries the reference potential, namely the ground, the inner conductor carries the signal voltage or, in the case of remote feeding, also the supply voltage. The ribbon cable is used to transmit high-frequency symmetrical signals .

Coaxial cables find a special application in the generation of high-power pulses in radar technology. No signals are transmitted, but here the cable acts as a high-voltage source with a precisely defined internal resistance , which has released its entire stored charge after a defined time.

In coaxial cables, the useful signal power is transmitted in the dielectric between the inner conductor and outer conductor. Mathematically, this is described by the Poynting vector , which ideally only has a value other than zero in the dielectric. In this case there is no electrical field component in the ideal conductor in the direction of wave propagation. In the dielectric, the electric field component for an electromagnetic wave is oriented vertically between the inner and outer conductor, the magnetic field component is oriented cylindrically around the inner conductor and the Poynting vector is oriented in the longitudinal direction of the line. At high frequencies , the coaxial cable can be viewed as a waveguide ; the surfaces of the metallic inner and outer conductor serve as a border for guiding an electromagnetic wave. Since this is usually undesirable, the circumference of the outer conductor must be smaller than the wavelength λ. This limits the usability of coaxial cables at very high frequencies because undesired waveguide modes can then occur.

Coaxial cables have a defined wave impedance . For radio and television reception technology, it is usually 75 Ω, for other applications it is 50 Ω. The attenuation of a coaxial cable is determined by the loss factor of the insulator material and the resistance layer . The losses in the dielectric, namely the insulating material, are determined by its permittivity ; they are decisive for the conductor coating on the line . With a coaxial cable, the distance between the inner conductor and the outer conductor and the material in this space ( dielectric ) are decisive for the wave resistance.

The wave resistance is therefore selected depending on the application.

At higher outputs and to minimize signal losses, the dielectric can be replaced by thin spacers or foam between the inner and outer conductors, the remaining space between the conductors is filled with air. As a dielectric, air enables almost lossless transmission. For air-filled lines, losses occur almost exclusively in the metal of the line. Such coaxial cables are often manufactured with outer conductors made of closed sheet metal and solid inner conductors. However, they are then mechanically less flexible and are only used in fixed installations. Examples are the connection lines between the transmitter and antenna with transmission powers from around 100 kW and cable networks.

Due to their concentric structure and the routing of the reference potential in the outer conductor, coaxial cables offer an electromagnetic shielding effect. The transfer impedance is a measure of this shielding effect and describes the quality of a coaxial cable shield.

Parameters of a coaxial cable

The important parameters of a coaxial cable include:

with the wave resistance of the vacuum

A calculation program can be found in Ref. The above formula and the program neglect the discharge surface G 'and the resistance surface R' of the line. This simplification is permissible in high-frequency operation.

Since the ratio D / d is limited for mechanical reasons and is logarithmically greatly undervalued, the wave resistance of coaxial cables cannot be produced arbitrarily either. Coaxial cables can therefore only be implemented in practice in the range of 30 to 100 ohm wave impedance.

Coaxial cables for high frequency applications are generally operated with line matching . The load resistance of the cable should correspond as exactly as possible to the wave resistance so that no reflections occur at the end of the line that could cause standing waves and increased losses. The degree of mismatch is determined with standing wave measuring devices or time domain reflectometry . For signals with a low bandwidth , the value of the load resistance can be changed using a resonance transformer .

Reflections and frequency-dependent properties of the dielectric also change the slope of digital signals (see dispersion and pulse schedule ).

Reflections occur at all points where the wave resistance changes, even with unsuitable connection points (plugs) at higher frequencies. 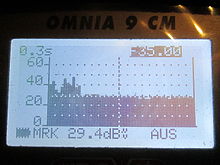 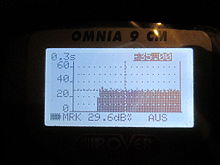 Ingress measurement with notch filter 5–18 MHz, indicated by the absence of the signal in the left area of ​​the diagram

Under Ingress ( engl. , Infiltration '), also called exposure, refers to electromagnetic disturbances in coaxial cables by transmitting equipment , household appliances, power lines, switching power supplies , etc. will. The disturbances mainly occur when the cable or its shielding is damaged, plug connections defective (or poorly shielded) or the shielding dimension (at least 85 dB) of the cable itself is too low. Even if the amplifiers are overdriven or a defect in the transfer point or on the incoming cable is an outer jacket break. If a branch or distributor in the ground is damaged, ingress can also occur. Ingress can also arise from poorly shielded antenna sockets , connectors and distributors. Therefore, only class A components should be used. The interference radiation should not exceed 40 dB.

Egress means the opposite phenomenon in which the signal comes out. In a weaker signal, this can lead to HF interference and interference radiation from neighboring devices. Therefore, only class A components should be used here as well.

The design and outer diameter as well as the desired operating frequency range determine the coaxial connection pieces that can be used, the HF connectors. A distinction is made between plugs ("male connector" or "plug") and sockets ("female connector" or "jack"). There are also “genderless” connectors, such as APC connections . The plug connectors differ in the inner diameter D of the outer conductor, the size and homogeneity of their line wave resistance and the insulating materials used. This as well as the homogeneity of the wave impedance determine the maximum operating frequency (cutoff frequency) to a large extent. Common ones are the BNC connectors used on laboratory and radio equipment and previously on network cables . They are available with line impedances of 50 ohms and 75 ohms.

The following table lists examples of connectors with a high limit frequency:

Coaxial cable for high transmission capacities. Most of the dielectric is air. Spacers are used between the inner and outer conductors to ensure the mechanical dimensions 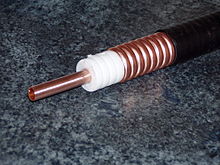 In the Joint Electronics Type Designation System (JETDS, MIL-STD-196), a system for naming electronic equipment developed by the US Department of War during the Second World War, coaxial cables were designated with the letters RG for Radio Guide. With the revision D in January 1985, the designation was deleted. Because of this, cables sold under the RG-xx label today do not necessarily meet military specifications.

For bus topology in the baseband

For star topology in the baseband

This cable family was specially developed for applications in which mechanical forces such as B. vibrations, bending or torsional movements act on the cable. With conventional cables, considerable interference can arise from external forces. Low-noise cables, on the other hand, have a special semiconducting dielectric to minimize this interference.

The technical data of some selected cable types:

aSpecifying a shielding dimension without specifying the frequency or the selected reference values ​​(e.g. current strength, voltage or field strength) is not clear. The shielding effect of a coaxial cable is heavily dependent on frequency. More information about the shielding effect of coaxial cables and their standard-compliant measurement can be found in the article Transfer impedance .
b at 100 MHz
c at 400 MHz