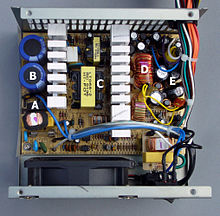 In contrast to conventional power supply units with a large mains frequency transformer , the conversion in the switching power supply takes place at a higher frequency, since transformers require less magnetic core volume for the same power at high frequencies. For this purpose, the mains voltage is mostly rectified , filtered , chopped into a higher-frequency voltage and, after the transformation in the high-frequency intermediate circuit, rectified again to the desired voltage.

Conventional power supplies contain a power transformer for galvanic isolation and voltage transformation. The maximum power that can be transmitted with transformers via the soft iron core increases roughly proportionally to the mass at a constant frequency. If the transformer is operated at a higher frequency, the same iron volume can transmit more power. The increase in specific power is roughly proportional to the mass. The following applies accordingly: The mass (iron or ferrite core and copper windings) of the transformer can be significantly reduced at a higher frequency for the same power, which makes the power supply unit lighter.

The transformer cores of switched-mode power supplies are made of ferrite ( ferromagnetic ceramic ) or iron powder to reduce hysteresis and eddy current losses . At higher frequencies, because of the skin effect, the windings are made as flat copper tape or by means of high-frequency braids (thin wires connected in parallel against each other). A transformer suitable for transmitting 4000 watts weighs, for example:

The rapid current and voltage changes in switched-mode power supplies lead to the emission of high-frequency interference voltages , which require line filters , shields and output filters in order not to exceed the permissible interference fields.

Switching power supplies are mainly used because of the high power density that can be achieved to save mass and material.

The voltage is converted by a ferrite core transformer , which itself either serves as an inductive energy buffer, only with the flyback converter, or with another storage choke (discrete inductance ), which then works as an energy store. As much energy is stored in the air gap of the ferrite core of the transformer or the choke as is necessary for the current load. The regulation of the output voltage under load is possible with semiconductor components in the high-frequency intermediate circuit and avoids the losses of a series regulator in the output circuit.

After rectification, the output voltage is filtered with capacitors and chokes in order to generate the smoothest possible direct voltage . The exception are so-called electronic halogen transformers, which supply the lamp voltage directly at the output.

Ferrite cores are also often pushed over the cables, but these are only effective at very high frequencies ( VHF range).

For this reason, switched-mode power supplies (current consumption below 16 A) with an input power of 50 W or 75 W (depending on the device class) have required a power factor correction ("PFC") since January 1, 2001 (EN 61000-3-2 ) have. This provides an additional, network-controlled switching stage (active PFC ) on the input side for an almost sinusoidal current curve . Often, however, only a large line choke is connected upstream, which provides at least approximately a sinusoidal input current (passive PFC).

Scheme of a switched-mode power supply (flyback or forward converter) with galvanic isolation.

Regulated switched-mode power supplies deliver constant output voltages or currents. The constancy of the output variable is achieved by controlling the energy flow into the power supply unit and thus for the connected consumers - there is a closed control loop .

Exceptions are unregulated electronic halogen transformers - these supply an alternating voltage around 45 kHz following fluctuations in the mains voltage.

The following processes take place in the switched-mode power supply:

With the help of the control circuit it is achieved that as much energy flows into the switched-mode power supply as is to be passed on to the consumer. The regulation required for this takes place via pulse duration or pulse phase control.

Switching power supplies have a ferrite core transformer to achieve voltage transformation and galvanic separation of the output and input side. An optocoupler is required to galvanically isolate the control loop from the mains . Alternatively, the switching signals can also be transmitted to the power transistors via auxiliary transformers in order to achieve potential separation. In this way, the entire control electronics are disconnected from the network. In the figure above, the separation is achieved by a transformer and an optocoupler in the regulation and control circuit.

If the switching transistor works in the secondary circuit of the transformer, one speaks of secondary switched-mode power supplies. These have a transformer operated with mains frequency and therefore have no mass advantage over conventional power supplies. Here only the linear voltage regulator is replaced by a voltage converter, which improves the efficiency.

Transistors ( MOSFET , bipolar transistors , IGBT ) can be used as switches . Thyristors ( GTO or with quenching circuit) are also used for high outputs .

Schottky diodes are mostly used as rectifiers on the secondary side in order to achieve the lowest possible forward voltage and to ensure the necessary fast blocking times.

A tingling sensation can be felt on electrically conductive, touchable parts of devices with protective insulation . This touch current is created by the Y capacitors built into the device for interference suppression and by parasitic capacitances to the supply network. Both are features of devices with a switched-mode power supply.

According to VDE regulation 0701/0702, the touch current may not exceed 0.5 mA, which is one of the prerequisites for affixing the CE mark .

The frequency and waveform of these interference voltages are often different from the mains voltage. The voltage against earth can be measured with high-resistance measuring devices and is usually higher than low voltage . However, it collapses when touched and is therefore considered harmless.

With fully insulated devices operated on 240 V in the USA, there is often no significant voltage, since the phases of the single-phase three-wire network (split-phase electric power) are symmetrical to earth and the capacitive voltage divider formed by the device is set to 0, apart from interference voltages and component tolerances Hold V. When operating on a phase with 115 V, the voltage division is only half as high as the contact voltage on 230 V.

In televisions , satellite television receivers and other devices with a signal input, this voltage is applied to the signal inputs (analog and digital interfaces such as USB, antenna inputs) against earth. To keep this voltage away from the sensitive input of the device, the signal lines should be the first when connecting and the last when disconnecting the device.

In the case of protective earthed devices , no significant voltage may be applied to accessible metal parts, as this would indicate a defect in the protective earth. However, hum loops can occur which are based on equalizing currents due to very small voltage differences (usually <1 V). 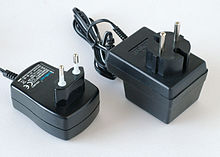 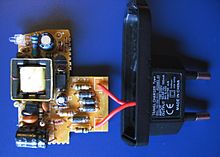 Secondary switched-mode power supplies are an outdated technology for general use. They consist of a conventional transformer power supply with a downstream step-down converter instead of the series regulator . They do not achieve the high efficiency of primary clocked circuits.