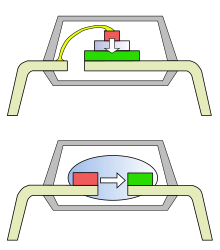 Schematic structure of optocouplers
above: face to face , below: coplanar with galvanic isolation

An optocoupler is a component of optoelectronics and is used to transmit a signal between two electrically isolated circuits . It usually consists of a light emitting diode (LED) or laser diode (LD) as an optical transmitter and a photodiode or a phototransistor as an optical receiver. The transmitter and receiver components are optically coupled to one another and housed in a housing that is opaque from the outside.

With optocouplers, both digital and analog signals can be transmitted. A distinction must be made between optocouplers and semiconductor relays , which can contain an optocoupler as a component for galvanic separation and are primarily used in electrical power engineering. Fork couplers and light barriers differ from optocouplers because they do not have a housing that is impervious to light from the outside and were not built for optical scanning applications.

The first optocouplers were made in 1963 by Ivars G. Akmenkalns et al. Developed by the company IBM and were resistive optocouplers, which in the first versions used smaller incandescent lamps or glow lamps as a transmitter element and a photo resistor as a receiver element in an opaque metal housing. In 1977 the lamps were replaced by light-emitting diodes and are used, among other things, in audio technology, e.g. B. in guitar amplifiers , used to control the characteristic of amplifiers. Resistive, d. H. Optocouplers working with photoresistor have a low cut-off frequency of 1… 200 Hz.

Since around 1972, optocouplers have been offered as electronic components in housings that are similar to those of chip housings , such as the dual in-line package (DIP). Elongated housing designs are also manufactured for high insulation voltages from around 4  kV . For safe mains separation, optocouplers are sometimes manufactured with a larger spacing of the connections in order to be able to maintain a creepage distance of 8 mm between the solder pads on printed circuit boards . The creepage distance under the optocoupler can also be extended with a slot if the spacing between the solder pads is insufficient.

Either the sender and receiver are directly opposite each other ( English face-to-face design ) or are on one level ( English coplanar design ). In the latter case in particular, the light beam is transmitted by reflection, similar to the optical waveguide .

So-called PhotoMOS relays use a series connection of photodiodes, which are operated as photo elements, i.e. in the photovoltaic area, in order to switch MOSFETs with the voltage ; see also semiconductor relays. This means that small and large direct and alternating currents can be switched.

Optocouplers can be designed as triacs and function as optotriac or phototriac or can be connected together with triacs and thyristors . This provides a semiconductor relay ( English Solid State Relay ) for switching AC mains voltage.

So-called reflex couplers have outwardly directed transmitters and receivers and are used to detect nearby reflective surfaces. They are designed for print assembly.
The external light-independent reflex sensors available for automation are housed in an industrial housing together with the electronics and switching stages required for modulation.

Circuit symbol, with phototransistor as output

For analog optical couplers which are direct current transmission ratio ( English current transfer ratio , CTR) to the ratio between input and output current at DC signals or low signal frequencies. Depending on the receiver, the values ​​are between 0.1… 0.5% (photodiode), 2… 120% ( phototransistor ) and 1,000… 15,000% (with Darlington transistor ). This value is considerably dependent on the current, especially when using phototransistors. Furthermore, it is temperature-dependent and decreases as the component ages. A reduction in brightness of more than 50% for the light-emitting diode due to aging is considered a fault. With digital optocouplers, no CTR is specified, but a minimum LED current that is required to change the level at the output.

The insulation resistance between the input and the output is very high and is up to 10 13  Ω .

The current of conventional optocouplers is 50 mA through the infrared LED in order to fully control the phototransistor. Seldom built optocouplers for a control current of up to 10 mA use an integrated Darlington transistor for this .

Light-emitting diodes can only tolerate blocking voltages of approx. 5 V, with phototransistors the permissible blocking voltage is 30 V to 50 V. Digital optocouplers usually work on the receiver side at a voltage of 5 V.

CMTI (Common Mode Transient Immunity) is the pulse strength of the optocoupler and is specified in kV / µs. It is determined by the capacitance between transmitter and receiver and by any shielding that may be present .

Optocouplers are used, among other things, where circuits are galvanically separated from each other and information, such as a control signal, has to be transmitted via the electrically isolating separation distance. Application examples are:

As an alternative, there are isolation amplifiers and digital couplers that work with inductive or capacitive transmission and thus achieve galvanic isolation. In contrast to optocouplers, these transmission methods cannot transmit equal levels directly, which is why additional modulation of the analog signal to be transmitted in the isolation amplifier is necessary. Inductive couplers transfer electrically induced energy to the other side with the signals.

As an alternative to the isolated transmission of alternating voltages and pulses, transformers can be used.