A photo or phototransistor is a bipolar transistor with a pnp or npn layer sequence whose pn junction of the base-collector barrier layer is accessible to an external light source. It therefore resembles a photodiode with an amplifier transistor connected.

A photodiode consists of a large volume of ideally undoped semiconductor material. There, photons create electron-hole pairs, which are pulled apart by an external electric field. In the case of a phototransistor, a type of charge carrier leaves the semiconductor material on the side facing the light and is diverted via a metal. The doping ensures that the metal cannot inject any charge carriers and that the charge carriers generated can be extracted from the side. On the side facing away from the light, there is virtually no metal between the photodiode and the amplifier transistor. Rather, the charge carriers migrate directly from the undoped area into a doped area, which also serves as the base of a transistor. The emitter is separated from the diode by the base, but the collector could in principle also be arranged as a jacket around the diode, depending on the dimensions. In any case, a light pulse first generates a voltage pulse through the directly generated charge carriers (due to the field effect before they reach an edge) and then a pulse of the collected charge carriers at the rear electrode.

The transistor is controlled by means of the reverse current generated by the incident light through this barrier layer. 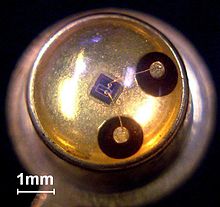 Phototransistor (square silicon chip in the middle) with a lead-out base (ring structure, bonding wire leads to the right). Emitter connection with bonding wire downwards, collector connection by mounting to the housing

In terms of circuitry, the light-sensitive photodiode is connected in parallel to the collector-base connections of the transistor. Light that hits the clear housing directly or through a lens in the otherwise closed housing causes a small photocurrent to flow due to the internal photoelectric effect , which is amplified in the transistor by the current gain factor to the collector current. The current amplification factor is in the range of 100 to 1000, depending on the type, which means that the collector current is greater by this factor than the photocurrent of a photodiode.

Phototransistors usually only have two connections - the collector and the emitter. However, there are also versions with a lead-out base connection - e.g. B. to regulate the working point . If the base remains unconnected, it takes a relatively long time for the base-emitter zone to become free of charge carriers. Therefore, u. a. the slow turn-off behavior of the phototransistor. In addition, the Miller effect reduces the speed of reaction to rapid changes in brightness. If a high cut-off frequency is required, the photodiode and transistor function must be separated.

Phototransistors are much more sensitive than photodiodes because they also act as amplifiers. They are used for detecting or transmitting light, for example light barriers, twilight switches, optocouplers . However, photodiodes are used in the receiver units of remote controls, since phototransistors are too slow for this application. These, like light barriers and optocouplers, do not work with visible light, but with infrared . 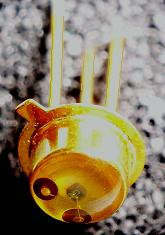 The wavelength of the maximum sensitivity of a silicon phototransistor is around 850 nm (near infrared ) and decreases towards shorter wavelengths (visible light, ultraviolet ). The sensitivity of type BP103 (metal housing, see pictures), for example, is still 10% of the value at 850 nm at 420 nm.

The reception wavelength range is limited to longer wavelengths by the energy of the band edge of silicon at around 1100 nm and ends there (red limit).

The most common phototransistors in terms of production volume are - similar to light-emitting diodes - only encapsulated in transparent plastic . Usually npn transistors manufactured with the planar epitaxy process are used. The chip is bonded to the collector connection leg and only has an emitter connection implemented by wire bonding . The basic connection is usually not brought out. The housing material can be designed as a lens. The wired components can "look" vertically or to the side.

Phototransistors for higher quality applications are encapsulated in metal housings with windows or (plastic) lenses. They often have a basic connection.

Phototransistors in optocouplers are encapsulated so as to be opaque and have a transparent, often externally mirrored plastic body facing the transmitter diode.