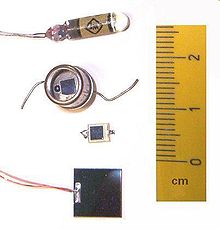 A photodiode or photodiode is a semiconductor diode , the light - in the visible, IR or UV range, or the use of scintillators and X-rays - to a pn junction or pin junction by the inner photoelectric effect in an electrical current converts or - depending on the wiring - offers this a lighting-dependent resistor. It is used, among other things, to convert light into an electrical voltage or to convert an electric current or to receive information transmitted by light. 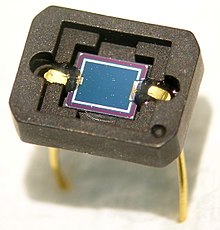 Close up of a photodiode

For comparison, the range of visible light is at wavelengths between 380 nm and 780 nm.

Due to the larger band gap of silicon, photodiodes made of silicon have comparatively low noise . Photodiodes for applications in the mid-infrared range based on cadmium telluride must be cooled to minimize noise, for example with liquid nitrogen , because the heat movement at room temperature is sufficient to lift electrons from the valence band to the conduction band . As a result, the dark current of these photodiodes at room temperature is so great that the signal to be measured is lost in it. A second reason for cooling is the otherwise superimposition of the IR radiation from the sensor housing itself.

Photodiodes for measuring light have a daylight filter , which limits the sensitivity in the red and infrared spectral range and adjusts the sensitivity curve to that of the eye . On the other hand, photodiodes for receiving infrared signals (as in remote controls ) have a daylight blocking filter . For example, they are encapsulated in dark-colored synthetic resin and thus protected from interference from visible light.

A typical silicon photodiode consists of a weakly n-doped base material with a more heavily doped layer on the back, which forms one contact (cathode). The light-sensitive area is defined by an area with a thin p-doped layer on the front side. This layer is thin enough that most of the light can reach the pn junction. The electrical contact is mostly on the edge. On the surface there is a protective layer as a passivation and anti-reflective layer . Often there is also a transparent protective window in front of the photodiode or it is located in transparent potting material.

PIN photodiodes have by the intrinsic layer between p- and n-type layer generally has a higher permissible off-state voltage and a reduced junction capacitance C S on. This increases the bandwidth . In contrast to photoresistors (LDR), photodiodes have much shorter response times. Typical cut-off frequencies for photodiodes are around 10 MHz and for pin photodiodes at over 1 GHz.

The lateral diode is a special type of photodiode, for example to detect the position of a laser beam. 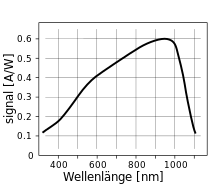 If photons of sufficient energy hit the material of the diode, charge carriers ( electron-hole pairs ) are generated. In the space charge zone, the charge carriers quickly drift against the diffusion voltage into the similarly doped zones and lead to a current . Charge carriers generated outside the space charge zone can also contribute to the electricity. But they first have to reach the space charge zone by diffusion. A part is lost through recombination and there is a small delay. If the connections are not connected externally, a measurable voltage of the same polarity as the flow voltage (saturation) is generated . If the connections are electrically connected to one another or if they are at a voltage in the reverse direction of the diode, a photocurrent flows which is proportional to the incidence of light.

The photons must have a higher energy than that of the band gap in order to produce this effect (in the case of silicon, for example, more than 1.1  eV ).

The photocurrent is linear to the incidence of light over many orders of magnitude, if no saturation occurs. In the ideal case, every light quantum that has an energy that is greater than the characteristic energy gap (band gap) of the semiconductor contributes to the current. In practice, however, the value is smaller and is known as the quantum yield . The response time is very short with suitable wiring; it can be down to a fraction of a nanosecond .

If a voltage is applied from the outside in the reverse direction of the diode, a small current will flow even in the dark. This is called the dark current ( I D ). It depends exponentially on the temperature of the photodiode. The dark current characteristic is an important quality feature of photodiodes.

The phototransistor is a combination of a photodiode and a bipolar transistor and is created by allowing light to fall on the base-collector junction that functions as a photodiode. The photocurrent is higher by the current amplification factor of the transistor, the cutoff frequency is lower. Similarly, there are photo junction field effect transistors and photo thyristors . 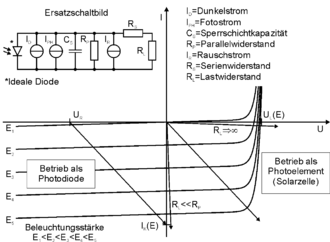 Characteristic curve of a photodiode

Photodiodes can be used in the following three modes:

Operation as a photo element

The photodiode supplies electrical energy. In this function it is a photo element; in the case of large-scale production, the photo diode is called a solar cell . Without a load, it is in saturation and the voltage tends to reach a limit value (open circuit voltage U L ), which depends little on the light intensity. When the load increases ( R L becomes smaller), the voltage drops and the current in turn strives towards a limit value (short-circuit current I K ). At the bend in this characteristic curve, there is power adjustment - the working point ( maximum power point ) aimed for in photovoltaic systems . In this operating mode, the photodiode is relatively slow and is not suitable for detecting fast signals. This type of circuit is used to measure brightness, e.g. B. used in lighting meters ( light meters , lux meters ).

In contrast to the photoresistor (LDR), no external voltage source is required. In CCD sensors , a large part of the sensor surface is filled with photodiodes, each charging a capacitor connected in parallel. If its stored charge is transported away in good time before the saturation voltage of the photodiode is reached, the charge is proportional to the brightness. The cutoff frequency is low.

Operation in a quasi-short circuit

If the photodiode is operated in a short circuit ( U = 0), it supplies a current in reverse direction ( I ≤ 0) that is linearly dependent on the irradiance over many orders of magnitude . To do this, it is often connected to a transimpedance amplifier - a circuit that generates a proportional voltage signal from the photocurrent and creates a virtual short circuit at the diode connections. This enables irradiance levels to be measured very precisely. Because the voltage on the photodiode does not change, no capacitance is transferred. This enables high cut-off frequencies.

Operation in the restricted area

If a reverse voltage ( U ≤ 0) is applied to the photodiode, a reverse current that is linearly dependent on the light flows; that is, when irradiated, it also conducts in the reverse direction ( I ≤ 0). This operating mode is usually selected for photodiodes in integrated CMOS sensors . The following effects are also characteristic of the restricted area:

Exemplary characteristic values ​​are used to describe a photodiode, in brackets the values ​​of the silicon photodiode BP 104:

Applications include exposure meters with a large-area selenium photodiode that directly feed a moving-coil measuring mechanism , sensors in digital cameras , and receiving elements for optical fibers .