In physics, noise (also known as background ) generally means a disturbance with a broad, unspecific frequency spectrum . It can therefore be interpreted as a superposition of many harmonic oscillations or waves with different amplitudes and frequencies or wavelengths .

When transmitting communication signals, noise is usually the greatest source of interference. The noise sources occur in the entire transmission system, i.e. in the transmitter, in the receiver and on the transmission path. A distinction is made between the noise power generated by external and internal noise sources. In communications technology , the quality of the signals is specified using the so-called signal-to-noise ratio ( signal-to- noise ratio).

Particularly in analog audio technology, radio and radio-based communication technology , during the development history of these technologies in the 20th century, great efforts were made to develop efficient noise suppression methods. Due to the triumph of digital technology - largely noise-free due to the principle involved - in communication technology and entertainment electronics , such processes have almost completely lost their importance in devices with the latest technology.

Noise was first described as a physical phenomenon, namely as measurable irregular current fluctuations, by Walter Schottky in 1918 ( Annalen der Physik 57 (1918), 541). If these current fluctuations are audible after amplification via a loudspeaker, a typical noise is heard that gave the phenomenon its name. In the meantime, the term “noise” is used in a much more general way, as defined above.

Another important physical cause of noise is also described in Schottky's 1918 publication, shot noise . In 1925, J. B. Johnson found the flicker during a review of Schottky's publication .

A variety of other physical noise phenomena have since been discovered. The generation recombination noise in semiconductors and the cosmic background noise are representative here . The latter is received by radio astronomical receiving devices from those directions where there are no known cosmic objects. So it is everywhere and it comes from all directions. According to today's models, this noise is a holdover from the cosmic big bang . From the radio astronomer's point of view, noise can not only act as a disturbance variable (such as the noise generated by the receiving system itself), but also e.g. B. be a useful variable as background radiation.

In the case of the noise thermometer , noise is also evaluated as a useful variable.

Many physical noise phenomena are still the subject of intensive research today.

The causes of twinkling or 1 / f noise cannot be explained classically. In terms of quantum theory , a uniform representation is possible.

Shot noise or Poisson shot noise arises from the fact that individual charge carriers, whose energy is statistically distributed, cross a potential barrier.

In addition to physical causes, noise is also classified according to the parameters of the stochastic processes or according to measurable quantities that describe the noise. The latter includes, for example, the spectral power density, which is the power per (infinitesimally smaller) bandwidth. It generally depends on the frequency .

Noise processes with constant spectral noise power density in the broader sense are called white noise in analogy to white light, which includes all spectra (frequencies) of visible light with the same power (intensity). In reality, noise processes with constant spectral noise power density cannot exist because they would have to transport an infinitely large amount of power. However, there are physical noise processes whose spectral noise power density is practically constant in a certain more or less large frequency band, even in the narrower sense. For the sake of simplicity, these processes are then also referred to as white . These include, for example, thermal noise and shot stream noise. This quasi-white noise often arises from the fact that only a section of Gaussian noise , i.e. noise in which the amplitudes of the individual frequencies is Gaussian , is considered or is relevant in which the amplitudes can be regarded as practically constant . White noise is not self-similar .

In order to avoid this ambiguity, the term " 1 / f noise " is used in scientific publications for processes whose spectral noise power density is inversely proportional to the frequency . Sometimes the 1 / f² noise is referred to as "red noise" to distinguish it from "pink noise", since the amplitudes in the low-frequency range (with red light) are higher. In a light spectrum, this would correspond to a shift in color into red. Some sources also speak of "brown noise" in this context. 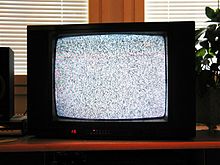 The image noise in an analog video and television is, a random pixel pattern which is displayed when a television or -empfängers no signal is received from the antenna. The pattern looks like randomly flickering dots or "snow". It arises from the fact that the antenna picks up electromagnetic oscillations or an electromagnetic background noise . Most of the time you see this effect on analog TVs without a set channel or on empty VHS tapes.

There are many sources of electromagnetic oscillations that generate the characteristic “snow” image. They can come from the atmosphere, from nearby transmitting antennas, or from cosmic microwave background radiation .

Noise can occur even if there are no signal sources in the vicinity, because the television set itself is also a source of noise. So the built-in components can also generate noise. Most of the noise comes from the first transistor just behind the antenna connector.

Due to the algorithms used for digital television reception, the image noise is less random.

English TV viewers used to see image noise in the form of black instead of white dots. The reason for this was the modulation technique used. English broadcasters used positive video modulation while other countries (and now England) used negative modulation.

Most modern televisions no longer display picture noise, but instead display a colored area with a message such as “No signal” or something similar.

The term signal-to-noise ratio (SNR) is used in high-frequency , measurement and communications technology as well as acoustics . The SNR initially served as a rating number for assessing the quality of an analog communication path. In order to be able to extract the information reliably from the signal, the useful signal must stand out clearly from the background noise, so the SNR must be sufficiently large. This plays a major role in sound recordings , for example . If the SNR falls, the bit error rate can rise in digital transmissions of sound or video . In earlier analog television , an input signal that was too low at the antenna input, for example due to twisting of the house antenna (mostly Yagi-Uda antennas ) or too great a distance to a television transmission tower , resulted in a noisy picture due to the insufficient SNR.