The following parts of the article seem since 2019 is out of date to be : The term broadcasting was in Media treaty redefined.
Please help to research and insert the missing information .

Scheme of the transmission process in radio

Broadcasting refers to the transmission of information of any kind (e.g. sound , images , text / data ) to the public via electromagnetic waves ( see also: radio network ) . Radio (which has existed in Germany since October 29, 1923) includes radio (receiver: radio ) and television . 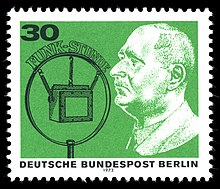 Radio pioneer Hans Bredow coined the term broadcasting in a lecture in 1921. The word creation goes back to the original method of wireless telegraphy , which can also be seen as the forerunner of digital transmission .

The term broadcasting is context-dependent: In the context of media content, the term traditionally includes the content of radio and television, but more generally all content that is transmitted to many recipients in the same form in real time. In the technology context, the term broadcast is defined as a unidirectional distribution service for radio or television programs. The basic principle is to reach as many recipients as possible which are not individually defined with one transmitter. Anyone can receive broadcasts; however, they may be encrypted and not fully usable without prior decryption. Radio programs and individual radio programs can also be received via the Internet if they are streamed onto the Internet, so that in principle every Internet-enabled computer is a radio receiver within the meaning of the Interstate Broadcasting Treaty or the Interstate Broadcasting Agreement . The technical aspects of streaming (e.g. multicast ) are not important here, but only that the offers are aimed at the general public and can only be called up in real time. The definition of broadcasting is relevant politically and in terms of broadcasting law, particularly when it comes to regulatory aspects. The transition to telemedia is fluid: where broadcasting ends (trivial broadcasting), those begin.

The term broadcasting does not mean that broadcasters always have antennas with omnidirectional characteristics, but that the information is disseminated without a carrier medium and without individually specified recipients. In all broadcasting areas - from long wave to ultra short wave - directional antennae are sometimes used to improve coverage of certain areas . This is determined for the respective locations within the framework of frequency coordination (as defined in international agreements, for example the Geneva Wave Plan ). There are also transmission systems , especially in the long-wave and medium-wave range , which work with omnidirectional antennas at certain times (usually during the day) and with directional antenna at night.

The main structural elements of broadcasting are organization , distribution technology and production . These can, but need not, come together in one hand.

The focus is on the organization, the broadcaster . He operates one or more radio programs and designs the course of the individual radio and television programs . Broadcasters are particular

The dualism of non-commercial and commercial, i.e. H. Broadcasting aimed at making a profit is reflected in the dual broadcasting system . Broadcasting corporations and state media corporations are established as public law corporations with a corresponding mandate by law. Private providers (including universities and religious communities) require approval or notification; In this respect, the state media authorities in Germany, KommAustria in Austria and OFCOM in Switzerland are responsible.

The foreign broadcasters in Germany have special legal bases: the remaining military broadcasters AFN and BFBS in Art. 60 (5) of the additional agreement to the NATO troop statute , the two IBB systems in an agreement with the USA.

The broadcasting organization is a related copyright related right to.

The analog or digital distribution takes place via

For the international coordination of frequency bands is and their broadcasting frequencies World Radiocommunication Conference of the ITU responsible.

The terrestrial distribution was originally the responsibility of the postal administrations , today partly with the broadcasters, partly with private providers (e.g. Media Broadcast , ORS , Swisscom ). It requires the allocation of transmission capacities or frequency allocation.

In West Germany , the broadcasting systems were withdrawn from the post office by the occupying powers after the Second World War and assigned to the broadcasters, which is why the state broadcasters in West Germany still have their own broadcasting systems today. The situation is different in the case of the later founded broadcasting companies ( DLF , ZDF, Third Programs ), where the (federal) post office was initially responsible again , or in eastern Germany, where the post office's transmission systems were privatized after the fall of the Berlin Wall .

ERF-GmbH (for Europe 1 ), IBB (for RFE / RL and VoA ) as well as some AFN and BFBS also have their own transmission systems .

A further market opening resulted in a regulatory order from the Federal Network Agency against Media Broadcast as the dominant company in 2016 . In the first quarter of 2016 alone, the new provider Uplink Network switched over 100 FM frequencies to its own stations.

Individual reception is common on the recipient side ; earlier there were also public loudspeakers (example: Stadtfunk Leipzig ) and television rooms .

Often third-party production is either entire programs (such as television production, especially in the entertainment sector ) or only individual contributions ( e.g. music productions on radio). If programs are originally distributed over several broadcasters, one speaks (especially in the American area) of syndication .

A distinction must be made between domestic and international broadcasting.

In the case of domestic broadcasting, the broadcaster's country of origin and the country of destination of its broadcasts are identical. According to the specific target area, national (nationwide), regional and local broadcasting (or regional or local windows ) can be distinguished. Depending on the program orientation, a distinction can be made between full and specialty programs (although comprehensive full programs in the sense of earlier years hardly exist today due to the increase in the number of programs, especially in radio). Ethnic media or programs for tourists represent linguistic peculiarities .

In order not to interfere with one another, broadcasters have to adhere to the transmission frequency assigned to them with a high degree of accuracy. These frequencies can therefore be used as calibration frequencies. Some high-power transmitters - especially in the long-wave range - even derive their transmission frequency from an atomic clock in order to get an ultra-constant carrier frequency, which makes these transmitters easy to use, high-precision reference frequency sources. Radio transmitters can also be used to study the ionosphere. The geophysical observatory in Collm measures the wind speed in the high atmosphere with the help of the signal strength of long-wave radio transmitters.