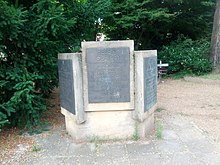 Memorial to Helene Glatzer, Rosa Menzer and Otto Galle on Barbarossaplatz in Dresden

Glatzer grew up in Weinböhla and completed an apprenticeship at the Coswig commercial school , after which she was an office clerk in Dresden . In 1916 she became a member of the social democratic central office for working youth , in 1919 in the USPD and the Free Socialist Youth (FSJ). In 1921 she entered the Communist Youth . Glatzer represented the resulting sub-district in the extended district management of East Saxony of the KJ Germany.

In 1922 she played a leading role in setting up a children's group in Weinböhla and joined the KPD . Together with Olga Körner, she organized the establishment and management of the Red Women’s and Girls’s Union in the East Saxony district and became an employee of the women's department of the KPD’s district leadership. From 1929 to 1930 she was a member of the Saxon state parliament as a member of the KPD . In 1929 she worked in the women's department of the KPD district leadership, together with Elsa Frölich and Olga Körner.

In 1930 she was delegated to Moscow to work in the Comintern office and to study at the Lenin School . She married the doctor Max Chalevichev. In the summer of 1934 she returned to Germany. Since August 1934 she has been a member of the illegal KPD district leadership in Halle-Merseburg (code name: Erna Schneider). On January 26, 1935, she was arrested by the Gestapo in Halle. After severe abuse, Helene Glatzer was murdered on January 31, 1935 in the Halle police prison.