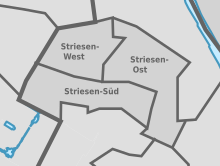 Division of the Striesen district into three statistical districts 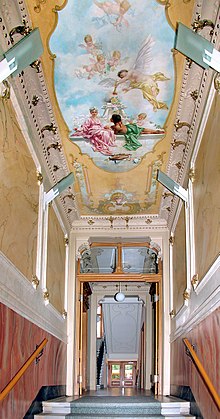 Striesen, which emerged from a Slavic square village , was first mentioned in a document in 1350 as Stresen, the name being derived from a personal name (Dorf des Streza). The village, the core of which was north of today's Schandauer Strasse, had an outwork and consisted of several farms . This Vorwerk, which was owned by a Dresden citizen in the 14th century, was gradually divided into farms through multiple inheritance divisions . Since there was once an old Elbarm on Striesener Flur , the soil around Striesen was very fertile, which had a positive influence on the development of the place. Later, this was Elbarm for 1300 applied to drain the fields Landgraben used.

In 1445 Striesen was subordinate to the Meißner Domstift and after the Reformation came to the office of religion and the electoral office of Dresden . In contrast to its neighboring towns, Striesen was spared the destruction of the Thirty Years' War . Parts of the extensive village corridor had to be ceded to the Elector in 1676 to create the Great Garden . Nevertheless, there was still enough agricultural land, which was cultivated by 28 farmers and gardeners in the 18th century . In addition, there were some cottagers and day laborers as well as craftsmen who had settled in the village. The road leading through the village center to Pillnitz was relocated in 1765 and thus bypassed the village. From this path, the Chaussee later developed, which is now known as Borsbergstrasse or Schandauer Strasse.

The village of Striesen around 1785. The ditch runs right through it.

Striesen was badly hit during the Napoleonic Wars . Since the place was in the apron of the Dresden Fortress , over 70 farms around the old village square were burned down in battles between French and Russians in 1813. Only three buildings were spared the destruction. The fighting also killed four windmills built around 1790, of which the Zum Windmühlenberg restaurant still reminds us today . After the fighting ended, the residents rebuilt their village, the core of which retained its rural appearance until 1945. In addition to free wood deliveries from the royal forests, the stones from the surrounding wall of the Great Garden, which was removed after 1813, could also be used for the construction. The frequent floods also brought hardship and suffering to the place, for example in 1784 and 1845 , when large parts of the village corridor were up to two meters high under water.

In 1856 a new chapter in local history began with the construction of the first house outside the village center. Four years later, a development plan was drawn up that identified plots on a chessboard-like floor plan for building apartment houses and villas. Following the American model, the new streets were initially only given numbers and letters, before real street names became established here after the incorporation. The open-plan construction was prescribed, so that Striesen became a “green” residential suburb of Dresden. This district, which did not extend on the areas north of the old village to the Blasewitzer Tänn , was called Neustriesen . At the turn of the century, the development had reached the local limits. Since Striesen in the west had grown together with Johannstadt , which was laid out in 1874 , the place was incorporated into Dresden on July 1, 1892 with around 11,000 inhabitants.

Horticulture was of economic importance at the end of the 19th century after more than 50 art and commercial gardeners had settled in Striesen. Some of these companies achieved international renown, such as the nursery Hermann Seidels , who became famous for breeding camellias and azaleas . The Striesener Volkspark can also be traced back to Seidel's rhododendron plantings . In connection with the advancing development, most of the nurseries had to give way around 1900 and were relocated to Laubegast , Tolkewitz , Reick , Leuben and Dobritz . In 1883/91 Striesen had a tram connection to Dresden . The Church of the Redeemer was built in 1878/80 and the Church of Reconciliation in 1905/09 to provide religious care for the residents . At the same time, the Catholics also built their own house of God, the Herz-Jesu-Kirche on the border with Johannstadt. There were also several school buildings and the St. Vinzentius Catholic children's home (today the Kapellknabeninstitut) on Wittenberger Straße. A separate cemetery was laid out for the suburb on Glashütter Strasse in 1880 .

Although most of the open spaces around the former village center had been closed by 1900, two housing cooperatives were able to build new housing estates on Wormser and Holbeinstraße and Junghansstraße in the following years. Allotment gardens were created in place of earlier gravel pits. Extensions took place in the twenties with the development of the streets around Stresemannplatz near the Great Garden.

Around 1900 the increasing industrialization began in Striesen, after the construction of commercial facilities was only possible to a very limited extent due to the strict building regulations. The Striesen camera production and cigarette production were of supraregional importance. There were also companies in the cardboard and art print industries. They preferred to settle on Schandauer Straße, where the Ernemann Tower was a new landmark for the district in 1923. Other well-known Striesen companies were the Mimosa factory, founded in 1904 for the production of photo paper on Bärensteiner Strasse, and the Jasmatzi and Lande cigarette factories .

In 1912 the Dresdner Kunstverlag was founded on Mosenstrasse, whose tradition was continued from 1952 by the Verlag der Kunst . In addition, there were numerous smaller craft businesses that produced shoes, prams, bags and other handicraft products in the backyards of the Striesen residential districts. While such trades were allowed everywhere, industrial companies were only allowed to settle on the areas south of Schandauer Strasse in order to ensure sufficient distance from residential developments. With industrialization, the proportion of workers in Striesen also grew, and they liked to meet in one of the many dance and meeting rooms in the district. Well-known meeting points were, in addition to the “Saxon Prince”, Hammers Hotel on Augsburger Strasse and the Volkshaus Ost, which is now used as an art house cinema.

The working-class tradition lives on today in the SG Dresden Striesen : after the German reunification (1990), the low-class football club was briefly called Dresdner SV 10 - after one of the most successful German workers' sports clubs (between 1924 and 1932 a total of six times ATSB or red sports champions). 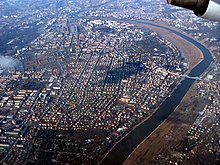 View of Striesen from the air (for orientation: in the middle right the Blue Wonder )

The air raids of February 1945 also hit the Striesen district and wreaked havoc here. With a few exceptions, the buildings in the former village center in particular fell victim to the bombs. The residential and commercial areas on Borsbergstrasse and Schandauer Strasse were also hit, while the villa districts got off relatively lightly and only individual buildings were destroyed, including the three-villa group on Comeniusstrasse . In 1955/58, reconstruction began in Striesen, with large block buildings being erected on Borsbergstrasse for the first time in Dresden. The construction of the new town center with restaurants and shops could be completed by 1970. After 1990, the renovation of the existing old building began, so that Striesen is once again one of the most sought-after residential areas in Dresden. The Dresden Technical Collections have been based in the former headquarters of Ernemann-Werke , last used by VEB Pentacon , since 1997. Striesen's industrial traditions are continued today by the f6 cigarette factory, while camera production has now been discontinued after unsuccessful rescue attempts.

The following parts of this section seem since 2014 is out of date to be : The last entry on the website attracted dsl-striesen.de is from April 2014. After another nearly six years is to be expected between temporal changes in the situation.
Please help to research and insert the missing information .

After public protests, broadband internet connections were laid in Striesen and the neighboring Blasewitz as two of the last still unserved densely populated German districts from October 2009. However, since this was done as part of a pilot project that ended soon afterwards , numerous interested parties (especially almost all in houses with fewer than five residential units) were not taken into account.

The first village school in Striesen was set up on Landgraben in 1839, after the children had previously had to make the long journey to the schools in Dresden city center. However, as early as the 18th century there was a paid children's teacher who had to hold his lessons in changing farm rooms. Until the 19th century, Striesen was under the church of the parish of women and the cross church , which were also responsible for education. After this school no longer met the requirements, another school building was inaugurated at Tittmannstrasse 21 in 1869. Both buildings were bombed in 1945.

To relieve the village schools, which had become too small, the Striesen community decided at the end of the 19th century to build three new schools. The first at Wartburgstrasse 23 was inaugurated in 1874. In 1886 the citizen school was built on today's Rosa-Menzer-Straße, which is now used by the 51st elementary school. In 1892 the 25th district school followed on Pohlandplatz (now the 25th elementary and secondary school). With the incorporation of the village, these schools were incorporated into the Dresden education system. During the GDR era, they were named after the anti-fascist Rosa Menzer (51st POS) and the workers' leader Ernst Thälmann (25th POS).

The building of the Striesener Gymnasium was designed in 1907 by city building officer Hans Erlwein and was one of the most modern school buildings of its time. In addition to separate classrooms for girls and boys, the representative building at Haydnstrasse 49 had modern gyms, bath and shower rooms, an auditorium, teaching kitchen, library and even its own school theater. The facility, initially called the 24th district school, housed the Haydn grammar school in the 1990s. After its closure, the building was renovated and in 2008 the Martin-Andersen-Nexö-Gymnasium opened . Erlwein also designed the 31st elementary school on Junghansstrasse.

The Dresden Freemason Institute goes back to a teaching and educational establishment for boys founded in 1772, which originally had its domicile in Friedrichstadt . The sponsor of this school was the Dresden-based Masonic lodge To the three swords and Astraa to the green diamond . In 1801 it was converted into a general citizen school and in 1876 into a secondary school and exclusively trained boys. The painter Louis Ferdinand von Rayski and the engineer Johann Andreas Schubert were among the best-known students . In addition to conveying bourgeois-humanistic ideals, the curriculum also included military-educational programs, some of which were led by officers close to the Masonic movement . Thanks to an affiliated foundation, the Freemason Institute also enabled children from poorer backgrounds and orphans to attend school.

From 1897 to 1899 a new school building in the neo-Gothic style was built on Eisenacher Strasse based on designs by the architect Hermann Kickelhayn (1862–1935). In addition to the classrooms, the complex also included two teachers' houses, a gym, a swimming pool and sports facilities. Most of the students lived in an attached boarding school on the school grounds. After the Masonic Orders were banned in 1933, this school was called Scharnhorst Home School and continued as a boarding school until 1944.

Despite some bomb damage, the building complex could already be occupied again in 1946. It was and remains the domicile of the Kreuzschule and Kreuzchor to this day , as the old Kreuzschule in the center of Dresden was destroyed in 1945. In the first post-war years, a school for the deaf and the engineering school for civil engineering moved in. In addition, the rooms served as emergency quarters for the Saxon State Library for a short time . 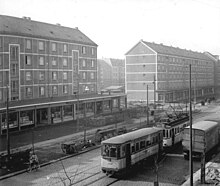 Due to its location, Striesen is well integrated into the public transport network. Striesen was used by horse-drawn buses from 1873, and the electric tram has been running on Borsbergstrasse since 1897 .

Some well-known personalities were buried in the Striesen cemetery.

Proverb: If you want to enjoy your life, you take your bed and move to Strießen. (Vernacular, with old spelling of Striesen)