Cossebaude is a district in the west of the Saxon capital Dresden . Together with the neighboring districts of Gohlis , Neu-Leuteritz and Niederwartha , it forms the village of the same name . Cossebaude is located in the Elbe valley on federal road 6 across from Radebeul on the edge of the left Elbe valleys .

Administrative seat of the village of Cossebaude

“Costebaude” and its neighboring villages on a map from 1821

The district of Cossebaude is 9 km northwest of Dresden city center, the inner old town , on the left side of the Elbe. The bulk of the local situation here is located in Dresden Basin , smaller parts are also taking place to Meissner highlands called Lösshochfläche up. The Neu-Leuteritz district is located on the Elbe slope there, also in the corridor of the Cossebaude district . Adjacent districts are the other Cossebauder districts Nieder- and Obergohlis in the east and north and Niederwartha in the north-west. In the west, Cossebaude borders on Oberwartha and in the south on the Mobschatz districts of Brabschütz , Alt-Leuteritz and Mobschatz . Contrary to popular belief, Cossebaude is not located directly on the banks of the Elbe , but is separated from the river by Niedergohliser corridors. The district of Cossebaude is part of the Dresden statistical district of Cossebaude / Mobschatz / Oberwartha . The partially preserved historical town center of Cossebaud is at an altitude of 120  m above sea level. NN at the exit of the Lotzebachtal and is traversed by the Lotzebach . 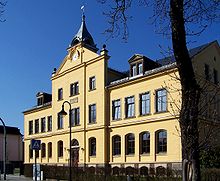 There are two schools in Cossebaude. The students at the Cossebaude primary school , which is located in an old building near the train station, come from the surrounding area. In contrast, the Cossebaude secondary school is located in a new building from the GDR era of the Dresden Atrium type . The students come from Cossebauder, Mobschatzer and Gompitzer districts as well as from Oberwartha, the district of Cotta , Gauernitz or even Meißen . Maintaining student numbers has been difficult year after year.

Stone ax finds near the local Lochmühle attest to the settlement of this area as early as 8000 BC. During the time of the Great Migration , Slavs settled here.

In the year 1071 Cossebaude is said to have been mentioned for the first time in the so-called Benno document, named after the Meißner Bishop Benno , as "Gozebudi", but this is doubted today. This forgery is related to other, likewise bogus documents, made for the year 1091 and for the year 1068. All forgeries served to confirm the ownership claims of the Meissen Monastery in 1144 by King Conrad III. The papal document of February 27, 1140 from Pope Innocent II, which has only been handed down by the Meissen Monastery, is also not free from allegations of forgery. All these documents are related to the developments from 1142/43 in Gau Nisan , which resulted in a race for rule in this region, in which from 1142 next to the diocese of Meißen and the Duchy of Bohemia , the German king and from 1143 also the Margraves of Meissen were involved. Cossebaude was therefore first mentioned as Cozebude in the document of Pope Innocent II on February 27, 1140 , although there are justified doubts here as well. There is no doubt that it was mentioned in the royal document from 1144. According to this document, the place was under the rule of the Meissen Monastery.

Like Cospuden and Kospoth , the toponym of Cossebaude goes back to the Old Sorbian “Kosobudy” and could mean “settlement of the people who prick (the earth) with scythes” or “settlement of the people who impale blackbirds”. A derivation from "koza" (goat) is out of the question. Since the place name was no longer intelligible, it was adjusted over time to similar sounding words in German, including "cost" and "Baude" (hut, Bude).

The protected southern hillside location in Cossebaude promoted viticulture very quickly . As early as 1269, the "Liebe Ecke" was named a vineyard. In 1604 the village came into the possession of the Württemberg secret councilor Dr. Aichmann, who modernized viticulture in the area; In 1619 Cossebaude fell to the Saxon elector . Has an important role Cossebaude in the last years of the Thirty Years' War to: After still 1,640 Swedish soldiers raided the town and devastated, in Cossebaude the first peace negotiations between found 1645 Saxony and Sweden at the inn "Black Bear" took place in the opposite Kötzschenbroda continued and ended there. 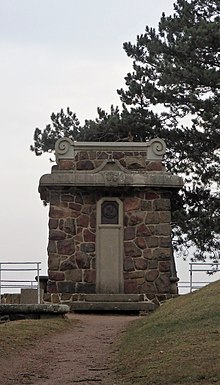 From 1715 to 1760 lived the "learned farmer of Cossebaude", Johann (es) Ludewig , who autodidactically acquired a great deal of knowledge, especially in mathematics and astronomy. B. could predict exactly a solar eclipse.

The year 1891 brought a radical change in viticulture: The phylloxera introduced from France destroyed a large part of the vines in Cossebaude. Alternatively, fruit trees are planted on the cleared areas. Its heyday brought the place to the center of the 20th century regularly in spring streams of visitors from Dresden and the region to the "Cossebauder Baumblut". Erna Berger was born in 1900 in the building of the Cossebauder train station. She later achieved world fame as a singer. At the beginning of the 20th century, Viktor Teschendorff, who came from Königsberg, founded a tree nursery that gained worldwide recognition for its rose cultivation. One of Viktor Teschendorff's grandsons is the conductor Hartmut Haenchen, who grew up in Cossebaude .

The Osterberg served according to legend, in ancient times as a meeting place of the Germans at Easter time, hence the origin of the name. Around 1890, a neo-Gothic castle that was visible from afar was built on the Osterberg, as well as an excursion restaurant, which was used for company holiday camps in the 1950s.

In 1913 the Cossebauder Bismarck Tower was built on the Herrenkuppe ; In 1927 the construction of the Niederwartha pumped storage plant, the world's first power plant of its kind, begins. The associated lower basin lies partly on the Cossebauder Flur and has been known in a large region as the Cossebaude reservoir since the plant opened in 1929.

According to the legend "The unfortunate shoe throwing in Cossebaude", the meanwhile outdated custom of shoe throwing was carried out by several servants in the village of Cossebaude on September 10, 1655 , in which a maid stooped with fatal consequences for a bread knife that she carried on her breast , struck the heart.