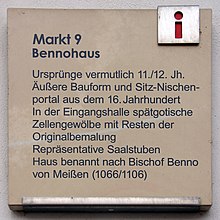 Memorial plaque on the house, Markt 9, in Meißen

Benno is first mentioned in sources as a canon in Goslar . In 1028 he became a monk, in 1040 he was ordained a priest . The fact that he is said to have been abbot in St. Michael in Hildesheim in 1042 is based on a later legend. In 1066 he was ordained bishop for the diocese of Meißen .

He was drawn into the Saxon War in 1073 . Benno tried to stay out of the dispute, but it was precisely for this that King Henry IV accused him of high treason , because "he had not given him any evidence of his unbroken loyalty during the entire Saxon War ..." and arrested him. In 1076, Henry IV declared the Pope deposed after he had argued with him over the privilege of appointing bishops in the investiture dispute. Benno, of whom it is not known how he was released, is said to have sided with the Pope and the Saxon princes and, in 1077, participated in the election of the anti-king Rudolf von Rheinfelden .

After Rudolf's death he turned to the new anti-king Hermann von Salm . For this he was removed from office by Henry IV, along with the other bishops who had fallen away from him, and other bishops were appointed. Henry IV also appointed an antipope - Clemens III. Benno asked the latter for forgiveness for the sake of peace, and the latter let him return to his diocese. Although there was now another Bishop of Meissen, Benno apparently returned to his office without a stir.

1084 Henry IV was. Crowned emperor in 1103 and took the truce thoughts, his father Henry III. had already strongly supported, and announced a nationwide peace in the country , where he found a supporter in Benno. In the course of the German eastward expansion , Benno was able to increase the possession of his diocese bloodlessly through land donations in 1090, 1091 and 1095.

His travels are said to have taken him to Bautzen in Milzenerland . Local foundings such as Bischofswerda and Bischheim are ascribed to him, but also the beginning of viticulture in the Elbe valley . He is said to have traveled the Via Regia , also known as the “Bischofsweg” in Upper Lusatia , mostly on foot, into old age.

The tradition that Benno was the illegitimate son of Frau Derksen and Count Friedrich von Woldenburg ( Saxony ) is not confirmed by sources. The Vita Bennonis (1512) by Hieronymus Emser contains some legendary reports from the life of Benno. Various miracles are ascribed to him, for example he made a spring pop out with a blow with his crook . Margrave Heinrich I. von Eilenburg , who insulted him, is said to have dropped dead after a year, as Benno prophesied. A key that he threw into the Elbe is said to have been swallowed by a fish and found in the fish belly after the bishop's return. This was the origin of the coat of arms of the diocese of Meissen: a key and a fish that cross each other. The reports about Benno's missionary work, his church building and his promotion of church singing are probably also legend .

Burial and worship of relics

Benno's bones were buried in the Romanesque Meißner cathedral and raised by Bishop Withego I around 1270 . With the Holy Way , a pilgrimage from Bohemia to Meißen was created in this context . After the Reformation was introduced in 1539, Bishop Johann VIII von Maltitz had it brought to the episcopal castle of Stolpen . Then they ended up in the St. Marien Cathedral in Wurzen .

The last Meißner Bishop Johann IX. von Haugwitz finally brought them, with a certificate of authenticity , to Duke Albrecht V in Bavaria in 1576 , where they were buried in Munich's Liebfrauenkirche in 1580 . At the end of June 2019, some of the relics were returned to the Diocese of Dresden-Meißen and are to find their place in the Dresden Cathedral and in the Bishop's Chapel in the Cathedral House .

The 1270 built in Meissen Cathedral of the remains of the Holy Monument, a stone shrine in Tumba form, was 1370/90 by a canopy added, as shown in a wood engraving by 1512 and 1523/24 by a high grave of marble replaced in the the bones were transferred after the canonization on June 16, 1524. This was destroyed in 1539 after the bones were removed. The location of the high grave has been marked since 2017 with a simple sandstone slab in the middle of the cathedral, on which "BENNO +" can be read, and is also shown pictorially on the church floor in another place.

From St. Benno in Munich: Benno with fish and key.

The veneration of Bishop Benno began in the middle of the 13th century. Documents report of large crowds, who u. a. made pilgrimages on the holy path to the grave, hoping for miracles and healings. In 1366, Canon Konrad Preuss organized a memorial service for the bishop and even then the canonization was sought .

But it was not until 1498 that efforts by the Meißen cathedral chapter and in a special way by George the Bearded , Duke of Saxony , to canonize Benno. It was on May 31, 1523 by Pope Hadrian VI. proclaimed and sparked violent polemics between Martin Luther and representatives of the Catholic Church . Luther saw this as an attempt to counteract the spread of the Reformation in Saxony and wrote the pamphlet "Against the idol and the devil, who is to be raised to Meissen".

for the exhibition in Meißen 2017