Bad Lauterberg in the Harz Mountains

Bad Lauterberg im Harz is a town in the district of Göttingen in the south of Lower Saxony ( Germany ). The former mining town in the Harz Mountains is now a state-recognized Kneipp spa and Schroth spa town with over 10,000 inhabitants.

View of the Bartolfelde district

Bad Lauterberg is located on the southern foothills of the Upper Harz Mountains and is surrounded all around by mountains of the Harz Nature Park , which in the area of ​​the Stöberhai (unincorporated Harz region ) up to 720  m above sea level. High above sea ​​level and covered by mixed forests; The Kummelberg ( 536  m ) and the Hausberg (approx.  420  m ) rise directly north of the city center, to the west of them the Heibeeksköpfe ( 465.2  m ) and to the east of the village the Scholben ( 575.1  m ) rises . The city is about 40 km from Göttingen and just under 72 km (as the crow flies ) from Braunschweig . It is 296  m above sea level on the Oder , into which the Lutter flows in Bad Lauterberg . To the north-east of the village is the Odertalsperre and to the south the Wiesenbeker Teich , a reservoir of the Upper Harz water reserve .

The neighboring communities include Herzberg am Harz in the west, Braunlage in the north and Bad Sachsa in the southeast .

Since the regional reform on July 1, 1972 , the city of Bad Lauterberg has been divided as follows:

The place name goes back to the Lutter river , which first gave its name to the mountain, then to the castle and finally to the settlement. This name is likely to be a derivation from Old Saxon hlûttar , which can be translated as "bright, pure, clear, louder". 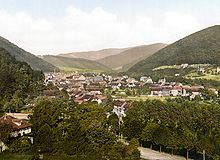 In 1183, Count Siegebodo II from Scharzfeld had Lutterberg Castle built on the local mountain. In 1202, around 20 years later, this was first mentioned in a document, along with other castles in the Harz region. The last count of Lutterberg Castle, Count Heidenreich III., Died in 1398, after which knight Hans von Minningerode occupied the castle for four years until it was finally handed over to the Count of Hohnstein . In 1415, Lutterberg Castle was completely destroyed as a result of a dispute between the Duke of Grubenhagen and the Count of Hohnstein and has not been rebuilt to this day.
see also Frauenstein Castle

The County of Lutterberg was granted mountain freedom in 1521 , which gave the miners there special rights. This was to ensure that experienced miners from the Ore Mountains came to the city. A mining settlement grew out of the small town of Lutterdorf at the foot of the Hausberg. In 1619 the city received permission to hold a fair twice a year.

During the Thirty Years War , the city was looted and almost completely burned down in 1641. Only three houses were spared from the fire. After the reconstruction, the copper works in Luttertal were built in 1705 and the Königshütte works in 1733. The latter was expanded to include a foundry and a blast furnace in 1820. The foundry remained in operation until 2001. Copper mining ended at Lauterberg between 1830 and 1868. The mining of barite in the Wolkenhügel pit continued until June 2007.

Development into a spa town

As early as 1839, Ernst Ritscher recognized the need for alternatives to mining and created a cold water sanatorium. In 1900 there were 5004 spa guests and 5305 inhabitants. In 1866 the ten-year construction of the spa park began. Forty years later, the district government of Hildesheim named the place a bath and from then on bore the name Bad Lauterberg in the Harz region . Medical councilor Josef Mayer from Munich introduced Kneipp therapy in 1926 and later also the Schroth cure procedure . In the same year, the local Kneipp club was founded.

In the course of industrialization, various trades and companies settled here from the middle of the 19th century. Some of these had considerable numbers of employees. The following should be mentioned in particular: brush production (Adler, Richter, etc.); Chair and furniture production (Germania, Böhme, Blödhorn, Halthoff); Match production (Deig); Button making; Machine tool production (Kuhlmann); Steel and sheet metal processing (MIAG); Foundry and mill construction (Königshütte). The water power to be used by the slope of the Oder played a certain role as an energy source: up to the present day there are around five different water ditch systems.

In 1929 Bad Lauterberg received city rights. In the following year, work began on building the dam for the Oder dam, which was completed in 1934. At the end of the Second World War there was hard fighting for Bad Lauterberg, with 54 houses and 153 apartments being destroyed, which corresponded to a degree of destruction of 8%. The city was eventually captured by American troops, and then it became part of the British zone of occupation .

After 1945, the population grew significantly due to the influx of people who had been expelled from the east . Thousands of people from Silesia , Pomerania , the Sudetenland and East Prussia found a new home in the village. The Odertal community camp (foreign workers' camp), which was empty after the end of the war, played an important role in the settlement of the displaced. From 1949, many new residents were able to move into newly built apartments in multi-family houses in the Aue district with ERP funds. At the same time, many single-family houses were also built in the Aue. In order to use the potential of the refugees' labor force, a number of large and small production facilities were built in the period after 1945. The following are to be mentioned: DETA (accumulators); Fouchs (log houses); Drinks (insulation boards); Tailor (wood pulp); Dilinski joinery (cabinet systems).

In 2008 the city celebrated its 825th anniversary.

Since the merger of the districts of Osterode am Harz and Göttingen on November 1, 2016, Bad Lauterberg in the Harz region has been part of the Göttingen district.

On July 1, 1972, the communities Barbis, Bartolfelde and Osterhagen were incorporated.

The historic St. Andrew's Church is located on the main street . In 1965/66, the St. Paulus Church was built in the west of the city, on Stollenweg, and a parish hall was added in 1972/73. The parishes of both churches belong to the Evangelical Lutheran parish of Herzberg. Further Evangelical Lutheran churches are located in the districts of Barbis, Bartolfelde and Osterhagen.

The Catholic St. Benno Church is located on Kirchberg. It was designed by Josef Fehlig and consecrated in 1963. As early as 1920, the Catholic Church bought a former school boarding school, which later became the Kneipp sanatorium St. Benno-Stift am Lönsweg. Services took place there until the inauguration of St. Benno Church. The parish hall of the parish was named after Joseph Müller , who had his first pastor's position in Bad Lauterberg. The parish belongs to the deanery Nörten-Osterode in the diocese of Hildesheim , today the Catholic churches in Bad Sachsa , Braunlage , Sankt Andreasberg and Walkenried also belong to it .

A New Apostolic Church is located on the street An den Lutterhöfen ; its congregation belongs to the Göttingen church district. As early as 1881, a New Apostolic congregation, which existed until 1993, was founded in what is now Bartolfelde. 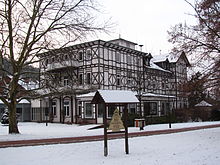 The council of the city of Bad Lauterberg in the Harz currently consists of 20 councilors. The stipulated number for a parish with a population between 10,001 and 11,000 is usually 26 councilors. By resolution of the city council, this number has been reduced by six council members to 20 for the current electoral term. The council members are elected for a five-year term by local elections. The current term of office begins on November 1, 2016 and ends on October 31, 2021.

The full-time mayor Thomas Gans (SPD) is also entitled to vote in the city council.

The flag of the city of Bad Lauterberg is red and gold.

The main statute of the city does not give any information about the exact design of the flag and banner.

The Scholmzeche at the Kurpark

View of the Wissmann Park

The music label below average from Cologne had its origins in the Barbis district.

Both its idyllic valley location and the privilege of being a state-approved Kneipp spa and Schroth health resort make the city a popular destination for health resorts, holidays and excursions. For this reason, tourism is one of the main economic sectors. The number of spa guests rose from twelve to currently well over 100,000 annually, with around 600,000 overnight stays in the same period. As a result of health reforms and the decline in spa treatments, some hotels are now offering wellness treatments.

There are many health resorts, clinics, guest houses and several large hotels in the city. In total, there are more than 3800 beds in the city. In Bad Lauterberg you can also find the Kirchberg thermal baths and the well-known Vitamar indoor wave pool, which, thanks to its tropical climate, found its entry in the Guinness Book of Records , as bananas grow there. There is a campsite each at the Oder dam and at the Wiesenbeker pond. In the early 1980s, the latter was also in the Guinness Book of Records for the world's largest omelet.

Another important industry is retail. The city has an impressive shopping mile, which compared to the number of residents has a considerable number of shops and boutiques with a wide range of products to offer.

The larger companies in the city include B. Exide , which produces batteries for industrial trucks, automobiles and submarines, as well as the German barite industry Dr. Rudolf Alberti GmbH & Co. KG, which produces heavy spar products for the paint and varnish industry, the plastics and rubber industry as well as for modern floor coverings, glasses, brake linings and as sound insulation. Other large companies and employers are Hemeyer Verpackungen, Petrusky Stahlbau, Kunststoff-Fröhlich, Finstral, Wistoba Brush Factory and others. a.

Bad Lauterberg is also known for the Schierker Feuerstein and Harzer Grubenlicht liqueurs , which are also produced and bottled here.

The following schools are located in the municipality:

The city also has a municipal library, which is located in the guest's house.

The Northeim - Nordhausen southern Harz line runs through the city . The breakpoint Osterode am resin Barbis each hour of regional trains of the DB Regio served. Buses provide the connection to the town center (lines 450 and 471), with a 10-minute walk to the bus stop in the direction of the town center. The old station Bad Lauterberg and the breakpoint Bad Lauterberg spa park in the center of Bad Lauterberg, at the earlier of Scharzfeld outgoing path toward Sankt Andreasberg were shut down in December 2004 for the passenger traffic, the railways in November 2007 removed. The Scharzfeld station on the outskirts of Scharzfeld was also closed in 2005 in favor of Barbis.

The aforementioned station is the first in Germany to have geothermal heated platforms. The installation of the heating cost 1.2 million euros.

Bad Lauterberg is connected to the surrounding area with 2 bus connections. However, only line 450 also runs on Sundays and public holidays, and much more often. In addition to the Barbis district, line 471 also opens up the two remote districts of Bartolfelde and Osterhagen.

Bad Lauterberg is on the federal highways 27 ( Blankenburg –Göttingen) and 243 ( Osterode - Nordhausen ). Since the end of 2008, the city has had a new suburban bypass (B 27), which relieves the Aue district from traffic. In order to improve the connection to the motorway network and to relieve the districts of Barbis, Bartolfelde and Osterhagen, the four-lane B 243 was rebuilt as a further bypass road; it crosses the Oder Valley Bridge and the Winkeltal Bridge and opens up the urban area via the junctions Barbis , Bad Lauterberg-West and Bad Lauterberg-South . This route was opened to traffic on September 5, 2014.

Personalities who worked or lived on site

Municipalities in the district of Göttingen

Districts of Bad Lauterberg in the Harz Mountains