This article deals with the plant genus of bananas ( musa ); for their edible fruits see dessert banana and plantain .

The bananas ( Musa ), obsolete figs of paradise , are a genus of plants in the banana family (Musaceae) within the monocotyledons . The approximately 70 species come - with one species in Tanzania - all from tropical to subtropical Asia and the western Pacific region .

Some species and hybrids produce edible fruits, of which those of the dessert banana ( Musa × paradisiaca ) are grown for food production. 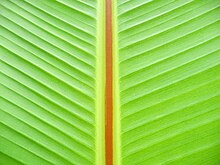 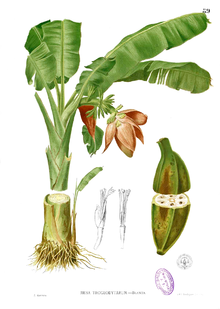 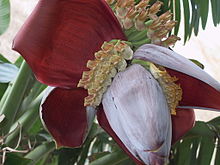 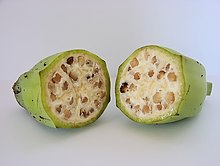 Banana seeds from ornamental bananas (fruit bananas, on the other hand, are sterile) 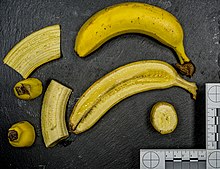 Cross and longitudinal sections through bananas 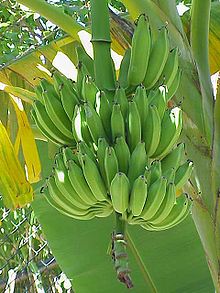 Fruit cluster on the "perennial"

Musa species and varieties are evergreen, perennial , herbaceous plants . They have a rhizome underground from which runners drift. The actual shoot axis remains very short until the flowering period. The "trunk" is a non-woody pseudo trunk consisting of the massive leaf stalks or leaf sheaths with a real trunk in the middle . It is at least half a meter, but usually three to ten meters high. It can be somewhat thickened at the base. The large, simple, whole-margined leaves are rolled in the bud position : As with the sister group of the Strelitziaceae , the leaves show convolute vernation (rolled bud position). They are clearly divided into petiole and leaf blade . The leaf blade is oblong or oblong-elliptical in shape, it reaches a length of two to three meters with a width of 30 to 60 centimeters. Older leaves are often torn several times up to the midrib.

The terminal inflorescence usually hangs over, but sometimes it is also upright. It is mostly covered with numerous green, brown or red-violet spathe-shaped bracts , which gradually fall off. On the underside of each bract there are several flowers in one or two rows. At the base of the inflorescence, the flowers surrounded by a bract are female (with stunted stamens ), towards the end of the inflorescence there are quickly fading, tubular male flowers with five stamens in the so-called "banana heart" (bell), a large, hanging colored bud . The male flowers are arranged in rows in the layers (bud) formed by several bracts, with a whitish core (the heart) in the middle of the bud. Five of the six colored, serrated, lobed bracts of the flowers have grown together to form a tube that rips open on one side to the base. The three-chamber ovary is subordinate. Hermaphrodite flowers can stand between the female and male flowers. The structurally threefold flowers are often pollinated by bats ( chiropterophilia ).

The fruit cluster of bananas is called a "tuft". A "tuft" can consist of 6 to 19 so-called "hands", which encompass the individual rows of a tuft. The individual fruits, which botanically belong to the berries , are usually 20 to 35 centimeters long and also referred to as "fingers". They are elongated, mostly curved, slightly angular in cross section. The curvature is due to negative gravitropism . Each “hand” of a “tuft” contains around 10 to 20 “fingers”.

In wild forms, many seeds are formed in the berry after fertilization. With parthenocarpic forms of culture no seeds develop. The seeds are irregularly spherical to lenticular.

Most species are monocarp , so they die after they have fructified. As a rule, however, kindles have formed on the root tuber , so that the plant is persistent.

Depending on the section, the basic chromosome number is x = 10 or 11. In the wild forms, diploidy is usually present. Cultivated forms have other degrees of ploidy , for example triploidy.

The black sigatoka fungus spreads on the leaves of the dessert banana , which is why industrially operated banana plantations are sprayed with fungicides once a week .

Red bananas (a triploid cultivar of Musa acuminata ), which like the rest of the dessert bananas are used for fresh consumption

The pulp of many varieties of Musa × paradisiaca and other hybrids is edible. Today the cultivated bananas bring it together to over 1000 crosses and varieties.

Compared to other types of fruit, conventional planted bananas contain a comparatively high amount of fructose and thus a lot of carbohydrates and also a lot of calories. Nevertheless, next to apples, bananas are the Germans' most popular fruit. A survey from 2015 says that the average person in Germany consumes around 12 kilograms of bananas per year. Despite the high proportion of the simple sugar fructose ( monosaccharide ), it is still undisputed in nutritional science that the hybrids of Musa x paradisica are healthy. The high proportion of calcium , antioxidants and vitamins promotes muscle functions, inhibits sources of inflammation and regulates metabolic processes. Worldwide, bananas provide a large part of the basal metabolic rate of calories and vitamins, especially in emerging countries.

In addition to the mealy-sweet dessert bananas also are plantains an important food source . Their whitish-yellow pulp, which has a mild to slightly sour taste, is not suitable for raw consumption . It is both boiled and baked or grilled. Banana blossoms (also known as "banana hearts") are also used as a fruit in Southeast Asian cuisine, while banana leaves often serve as a kind of serving tray or flavor-enhancing baking and grill shell.

The "banana heart" is also edible, both the fleshy, whitish core (the heart) as well as the bracts and the flowers.

From the fiber bananas ( Musa textilis ), called abacá , which are widespread in Indonesia , the so-called manila fibers of the leaf sheaths are processed into nets , cordage and yarn . 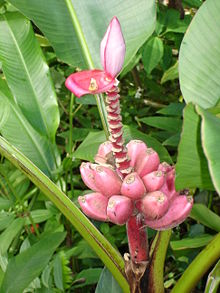 Some types of bananas are used as ornamental plants, especially in tropical and subtropical countries. These include varieties that are propagated via seeds as well as those that are propagated vegetatively using offshoots. The most common ornamental plant is Musa ornata , this was planted in European ornamental gardens before it was scientifically described. While ornamental bananas grow and bloom all year round in tropical climates, in subtropical and warm (Mediterranean) climates they enter a dormancy phase in winter. There are moderately frost-hardy varieties that overwinter in the ground without any special protection and sprout again the following year. A well-known "hardy" type of banana is the Japanese fiber banana ( Musa basjoo ); Several varieties with improved frost resistance have been bred from it.

At the beginning of the 20th century, cultivation regions were affected by Panama disease . The fungus Fusarium oxysporum f. sp. cubense , strain TR1 (= tropical race 1), which persists in the soil for years, penetrated the roots. Around 1960, the Gros Michel variety was widely switched to the more resistant Cavendish . A new variant of the mushroom - TR4 - was discovered in several sub-variants in Southeast Asia in the 1990s and also spread to Africa and the Middle East. The mushroom is now found almost worldwide, in all major growing areas, including Malaysia, Indonesia, Thailand, India, China and the Philippines, and thus in the largest growing areas worldwide. Variants also occur in subtropical growing areas. Efforts are now being made to replace the Cavendish monocultures with new varieties in order to make the massive spread of a disease more difficult in the future. None of the previously registered varieties should be considered for this.

At the KU Leuven there is a gene database with currently over 1530 banana varieties. This ensures that these different varieties are preserved for future generations.

The word banana came into German through the Portuguese banana . It originally comes from a West African language, probably from the Wolof . The banana got its scientific name when the botanist Carl von Linné classified the flora of the world in 1753. He named the banana using the Arabic-Persian nameموز / mauz for the fruit Musa paradisiaca (for the plantain ) or Musa sapientium (for the dessert banana ) → Musa Cliffortiana .

The division of the genus Musa into sections has changed repeatedly. According to Wong et al. In 2002 the genus Musa is divided into the three sections Musa , Callimusa and Ingentimusa ; they put the species of the Rhodochlamys section in the Musa section and those of the Australimusa section in Callimusa . Markku Häkkinen also exhibited Ingentimusa in Callimusa in 2013 ; thus there are only two sections that differ, for example, in the basic chromosome number x = 11 and x = 10.

Since then, the genus Musa has only been divided into the two sections Musa and Callimusa and contains around 83 species and some subspecies or varieties.

There are some hybrids , for example: