The following parts of this article appear since before 2005 is out of date to be : Number of speakers
Please help with to the missing information research and insert . 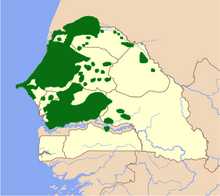 Main distribution area of ​​the Wolof in Senegal and Gambia

Wolof [ wɔlɔf ] is a Wolof language from the northern branch of the West Atlantic language family , a subgroup of the Niger-Congo languages . The closest related languages ​​are Fulfulde and Serer .

Wolof is spoken predominantly in Senegal . About 80% of Senegalese speak the language and make Wolof the actual colloquial language of the country. Wolof is also spoken in the neighboring countries of Gambia and Mauritania .

In the older French- language literature you can also find the spelling “Ouolof” instead of “Wolof”. In some English-language publications, especially those that refer to the Gambian Wolof, you will also find the spelling “Wollof” , because this spelling tends to lead to the correct pronunciation of the word in English native speakers. In publications from the 19th century and before you can also encounter the spelling “Volof” or “Olof” . The spellings “Jolof” , “Jollof” and “Dyolof” also appear very rarely . - The term Wolof is used for the people as well as for their language and for things and conditions from their culture and tradition.

About 40 percent of Senegalese (approx. 3.2 million people) speak Wolof as their mother tongue. Another 40 percent of Senegalese speak Wolof as a second language. In the region from Dakar to Saint-Louis as well as west and south of Kaolack, Wolof is spoken by the majority of the population. In eastern Senegal and in the part of the country south of Gambia (Casamance, Bassari-Land) only a few speak Wolof, although the situation in the big cities such as Ziguinchor is again different: Wolof is the most widely used colloquial language there, especially among young people but even more interspersed than in the north with words and phrases that come from French. The latter is the official language for all of Senegal; however, Wolof is recognized as the “national language” alongside Serer, Diola, Malinke, Pulaar and Soninké.

In Gambia, around 15 percent of the population (around 200,000 people) speak Wolof. The official language in Gambia is English. The dominant languages ​​of the Gambia, Mandinka (40%), Wolof (15%) and Ful (15%), are also accepted as official languages. About every second Wolof is in the Gambia's capital Banjul .

In Mauritania , around 7 percent of the population (around 185,000 people) speak Wolof. The language is used there only in the southern coastal region. The official language in Mauritania is Arabic, the most important lingua franca is French.

Wolof has been written in Arabic letters since the 11th century, since the beginning of Islamization. Numerous poems and religious writings have come down to us in Arabic script and it is still in use today in the Muslim context.

As a rule, however, Wolof is now written using the letters of the Latin alphabet. For this purpose, the language institute Center de linguistique appliquée de Dakar (CLAD) developed a standard orthography that has been official since the 1970s. It was last confirmed again by the state in 2005. However, in everyday use you will also find spellings based on French spelling. For example, one could already read on an advertising poster: Thiafka bou mat seuk “Perfect taste”, which in official spelling should have been Cafka bu mat sëkk .

The pronunciation of the letters generally corresponds to that of the German phonetic values. The r is not like in English or French as throat-R , but as tongue tips-R speaking, similar to the Italian or Spanish. The letter x is pronounced like the German letter combination ch in Bach .

Single vowels are pronounced short, double vowels long. Example: o is short like open in German , oo is long like the a in English call . If a closed vowel is long, the diacritical mark is only placed over the first vowel, i.e. óo , but some sources deviate from this CLAD standard and write óó .

The very common letter ë is pronounced like the German e in shadow , like the French e in le or like the English unstressed article a ([ə] = Schwa ).

Special features of the Wolof language

Even though the verbs in Wolof are not inflexible, but rather suffixes with very different functions can be appended to them, large parts of the conjugation in Wolof are more in the area of ​​personal pronouns: The different forms of the pronouns (see below) each bring different parts of the sentence into focus and sometimes also nuance tense and aspect (see above all the contrast between naa and dama ). In particular, they also combine with other elements such as the auxiliary verb di “sein / werden”, which marks the unfinished aspect, or the form “a ngi”, which marks direct experience, to form inseparable units. The resulting forms are also called temporal pronouns.

Conjugation by aspect rather than time

In Wolof, tenses such as present tense, past tense and future tense (future) play a subordinate role. On the other hand, the aspect of an action from the speaker's point of view is of decisive importance. The most important aspect is whether an action is completed or not yet completed from the speaker's point of view, regardless of whether it takes place in the present, past or future. Other aspects are whether an action takes place regularly, whether an action definitely occurs or has occurred, whether an action wants to emphasize the subject, predicate or object of a sentence, etc. Consequently, conjugation is not based on tenses, but on aspects. Nevertheless, the term temporal pronouns (tense pronouns) has become established for the personal pronouns to be conjugated; The term aspect pronoun would be more appropriate.

In Wolof one differentiates between action verbs and state verbs. Action verbs express activities or activities; State verbs describe states or properties. Example: the "go" is action verb; baax "being good" is a state verb .

This distinction plays a dominant role in Wolof because the appropriate translation of the temporal pronouns often depends on whether they are used with an action verb or a state verb: In the former, the completed aspect corresponds more to our perfect or past perfect and the unfinished to our present tense or past tense, while with the latter, the completed aspect usually has to be translated with a form in the present or past tense. Some temporal pronouns occur predominantly with a verb type; for example, the temporal pronoun maa ngi "I, here and now" is rarely used together with a state verb .

Strictly speaking, there are no adjectives in Wolof: this role is taken over by the verbs of states. Example: baax , as a verb of state, means “to be good” and is used wherever we would use the adjective “good”. For example, baax na means “it / that is good” and nit ku baax corresponds to our “good person”, but one would have to translate quite literally as “person who is good”.

Consonant harmony - harmony of the sounds

Example: The definite article “der / die / das (here)” has the following different forms in the singular: bi , gi , ji , mi , si , wi , li , ki . Which form is used often depends on the initial consonant of the preceding word, for example, it says motley bi “the door”, but kër gi “the house / the yard”.

Strictly speaking, this variety of forms is the remnant of a class division, as it is common for many African languages ​​(especially for the Bantu languages , to which Wolof does not belong); here the world of nouns is divided into different nominal classes, e.g. B. in animate things, inanimate things, everyday objects, etc.

In the Wolof, too, this classification was maintained in some places. In these cases, no more consonant harmony can be recognized, but the different articles cause a change in meaning. For example, trees usually have the article gi , but their fruits have the article bi : mango gi "the mango tree" vs. mango bi "the mango". And the diminutive (belittling) is also formed by changing the article: jëkkër ji “husband” vs. njëkkër si "husband" (usually negative).

Wolof does not distinguish grammatically between masculine (male), feminine (female) and neuter (neuter). Example: bi can mean “the”, “the” or “that” depending on the translation. Mu ngi dem can mean “he works”, “she works” or “it works” depending on the translation. However, the variety of articles / classifications dealt with in the previous section partly fulfills similar functions as our grammatical gender.

Conjugation of the temporal pronouns

The following examples come from gibberish, Wolof for Senegal - word for word by Michael Franke.

With the song 7 Seconds, which had a great commercial success in the charts in 1994 , the European listener can get an idea of ​​the language. In the duet with Neneh Cherry and Youssou N'Dour , N'Dour sings the first verse on Wolof.