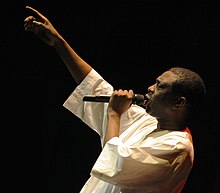 Youssou N'Dour 2009 in Warsaw at the 5th Cross Culture Festival

Youssou N'Dour [ jusun̩ˈduːʀ ] (born October 1, 1959 in Dakar ) is a Senegalese singer and composer and Minister for Culture and Tourism in Senegal. He helped develop today's popular music in Senegal, which is called Mbalax in Wolof . It is a mixture of the traditional griot praises and the percussion of Senegal with Afro-Cuban arrangements. He is considered one of the most influential and successful artists in Africa.

Youssou N'Dour at the TFF.Rudolstadt 2011

Youssou N'Dour was the lead singer of the star band , from which the group Étoile de Dakar emerged in 1979 . In 1983 N'Dour went to Paris and named his new band, with whom he performed in Europe, Super Étoile de Dakar.

As part of the World Music - boom he could establish itself on the western market in the 1990s. Here he worked with Ryuichi Sakamoto , Peter Gabriel and Wyclef Jean , among others . His most famous and commercially successful single is 7 Seconds , a duet recorded in 1994 with Swedish singer Neneh Cherry .

Youssou N'Dour has been a regular guest at the Africa Festival in Würzburg since 1994 . On the occasion of the opening of the world exhibition Expo 2000 in Hanover, he gave a concert on the Expo Plaza in front of several thousand spectators.

The album Égypte , released in 2004, contains songs (partly by Fathy Salama ) in which Youssou praises his African-Islamic culture and calls for mutual understanding of religions.

In his homeland, Youssou N'Dour is a strong cultural symbol who actively addresses social issues. In 1985 he organized a concert for the release of Nelson Mandela . In 1986, N'Dour and his band celebrated the fighter against apartheid with their own song. He appeared in the 1988 Amnesty International Human Rights Now! Tour on and worked with the United Nations and UNICEF . He founded the Joko project to open internet cafés in Africa and connect people from Senegal around the world.

At the Live 8 concert on July 2, 2005, he performed in a duet with Dido in London and Paris . He organized the Africa Live concert on March 12 and 13, 2005 , at which some of the most renowned African musicians performed in the Senegalese capital Dakar . The concert was part of the “Roll Back Malaria” campaign and supports the fight against the disease malaria , which still affects millions of people, especially in Africa.

At the Music & Messages concert of the “ Your voice against poverty” initiative on June 7, 2007 in Rostock, he was involved alongside other stars such as Bono , Die Toten Hosen and Die Fantastischen Vier . The concert took place as part of the G8 summit in Heiligendamm .

He has also been a member of the World Future Council since May 2007 and is committed to the rights of future generations.

In early January 2012, N'Dour announced that he would run against the previous incumbent Abdoulaye Wade in the upcoming Senegalese presidential elections in February of the same year . At the end of January, however, the Constitutional Court did not allow N'Dours to stand because he had only submitted 8,900 valid signatures instead of the required 10,000. At the same time, Abdoulaye Wade was allowed to run for election, although the Senegalese constitution does not actually provide for a third candidacy. This led to street battles between opposition protesters and the police in Dakar. N'Dour, who himself spoke of almost 13,000 signatures received, initially planned to appeal the decision, but then supported the eventual winner of the election, Macky Sall . On April 4, 2012, he was appointed Minister for Culture and Tourism in his cabinet.

At the end of February 2012, at a meeting with Jo Leinen , N'Dour signed the international campaign's call for a parliamentary assembly at the United Nations .

The film Retour à Gorée / Return to Gorée , German title “Return to Gorée” from 2006 is a documentary in which Youssou N'Dour and other musicians undertake a trip to one of the largest slave trading centers, the island of Gorée looking for musical roots, including jazz . During the trip, Youssou N'Dour writes new songs, influenced by the impressions of the trip. The film ends with a concert commemorating the atrocities of slavery on the island of Gorée.

Another N'Dours film project is the 2007 feature film Amazing Grace . This deals with the beginning of the anti-slavery movement in Great Britain . N'Dour plays the role of Olaudah Equiano in the film . He is one of the most prominent figures of African origin in the British parliamentary debates against the slave trade at the end of the 18th century.