Amnesty International (from English amnesty , pardon, penalty, amnesty ) is a non-governmental (NGO) and non-profit organization that campaigns for human rights worldwide. Its work is based on the Universal Declaration of Human Rights and other human rights documents, such as the International Covenant on Civil and Political Rights and the International Covenant on Economic, Social and Cultural Rights . The organization researches human rights violations and conducts public relations and lobbying workand organizes, among other things, letter and signature campaigns for all areas of their work.

Amnesty International was founded in London in 1961 by the English lawyer Peter Benenson . The idea of ​​founding it should have come to him when he read repeatedly in the newspaper about torture and violent repression, with which governments acted against politically different people. In an interview conducted in 1983, Benenson recalled that the article was about two Portuguese students who had toasted freedom in a restaurant in Lisbon and were subsequently sentenced to prison terms. Subsequent research revealed that it was possibly a note in The Times dated December 19, 1960, which did not, however, contain any details about the "subversive activities" of the convicts. On May 28, 1961, Benenson published the article "The Forgotten Prisoners" in the British newspaper The Observer, naming several cases, including Constantin Noica , Agostinho Neto and József Mindszenty , and calling on readers to to campaign for the release of these prisoners through letters to the respective governments. He wrote: “You can open your newspaper any day of the week and you will find in it an account of someone captured, tortured, or executed anywhere in the world because their government does not like their beliefs or religion. “The Appeal for Amnesty, 1961 action that resulted from this article is considered to be the beginning of Amnesty International. Founding members included Eric Baker and the Irish politician Seán MacBride , who was also president of the organization from 1961 to 1974.

Although Amnesty International describes itself as an organization open to people of all nationalities and religions, its members initially came mainly from the English-speaking world and Western Europe. This limitation could be explained by the Cold War. Attempts to set up Amnesty groups in Eastern Europe have met with great difficulties. This was not only due to state repression, but also to the different interests pursued by Western and Eastern European human rights activists.

The logo is a candle wrapped in barbed wire. It was created by English artist Diana Redhouse , who was inspired by the saying It's Better To Light A Candle Than Complaining About The Darkness .

The German section had already decided in the 1970s to no longer use this logo for itself. Instead, a blue and white logo with lowercase letters was used until 2008. In Germany, Austria and Switzerland, a spelling with lowercase letters and abbreviations, which is no longer used today, was used until mid-2008: amnesty international , ai or amnesty . In mid-2008, a new, uniform layout was introduced internationally, using the colors yellow and black. The logo contains the words Amnesty International in capital letters and the candle wrapped in barbed wire.

The German section was founded in Cologne at the end of June 1961, two months after the founding of the international organization, by journalists Gerd Ruge , Carola Stern and Felix Rexhausen , and was recognized as the first section in July 1961. The German AI office resided for decades in Domstrasse in Cologne's Agnesviertel , where Stern lived at the time. Initially, the group called itself "Amnesty Appeal". For example, she campaigned for political prisoners imprisoned in the GDR. After the fall of the wall , the organization was also active in the new federal states, where it was banned until then. As of 2020 it is based in Berlin. Markus N. Beeko has been Secretary General of Amnesty International in Germany since 2016 (as of 2020).

Amnesty International Austria was founded on May 4th 1970. On November 14, 2001, AI Austria was one of the first 44 organizations to receive the Austrian Donation Seal of Approval. Secretary General is Heinz Patzelt (as of January 2016).

The Swiss section was officially founded in 1970. But the first section existed in Geneva as early as 1964, initiated by Seán MacBride , then Secretary General and co-founder of Amnesty International. The first employee was hired in 1976, and today there are 70 employees for Amnesty Switzerland . In addition, 1,500 volunteers are actively involved in more than seventy local and themed groups. The current managing director is Alexandra Karle .

Structure of the organization

Numbers and other data about the organization 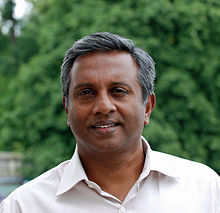 Amnesty International claims to have more than seven million members and supporters in more than 150 countries. There are sections in 53 states that guarantee continuous human rights work. The larger sections usually have a secretariat with full-time employees. The section coordinates the work of the members and is the liaison between the groups and the International Secretariat in London. The sections send representatives to the Global Assembly (until 2017 International Council Meeting and English International Council Meeting (ICM) ), the supreme body of Amnesty at the international level, which occurs every two years. The Global Assembly defines Amnesty's strategy and operation, and elects the international board to manage the day-to-day running of the organization. The International Secretariat in London, headed by the International Secretary General, is also under the responsibility of the International Board of Directors. From 2010 to August 2018 this was Salil Shetty , who is from India . He initiated a change in the organization by increasing the presence in countries of the global south through the establishment of offices and research work anchored there, while the headquarters in London was downsized. His successor in 2018 and 2019 was Kumi Naidoo from South Africa, former director of Greenpeace .

Membership and structures are regulated in the statutes and a working framework. Members can join a group. Active efforts are expected from groups through targeted campaigns on site, letter writing, public relations work and fundraising. All members also receive offers to join in independently of group activities. There are around 30,000 members in Germany, of which around 9,000 are in over 600 local groups divided into 43 districts. There are also so-called coordination groups that coordinate work on individual countries or specific human rights issues across the section. Around 70,000 sponsors support the organization with regular contributions. The German section is managed and represented externally by an honorary board of directors consisting of seven members. The board spokeswoman is Gabriele Stein, who together with the board member responsible for finance, Roland Vogel, represents the association legally.

In 1999 Amnesty International Germany moved into rooms in the “ House of Democracy and Human Rights ” on Greifswalder Strasse in Berlin . In 2012 the secretariat finally gave up its seat in Bonn . For reasons of space, however, only the Berlin-Brandenburg district office and the East Regional Office are located in the “House of Democracy and Human Rights”; the section's secretariat is now on Zinnowitzer Strasse. In addition, there are regional offices in Munich (since 2011) and in Düsseldorf (since 2016) that support members in southern and western Germany.

The secretariat carries out administrative tasks for the members, carries out public relations and takes on lobbying work. It employs over 60 part-time and full-time employees and is headed by Markus N. Beeko as General Secretary, who replaced Selmin Çalışkan in September 2016 .

The annual meeting of the German section takes place once a year over two and a half days at Pentecost. All members are entitled to propose and vote, groups have additional voting rights. Sponsors have no voting rights and cannot participate. The annual meeting elects the seven-member honorary board and decides on the main topics of the work of the section. The discussions are confidential ("internal"), individual resolutions can only be made public if the annual meeting decides.

The German section is financed mainly from membership and sponsorship contributions and donations, to a lesser extent from inheritances, sales proceeds, fines and collections. The organization has been conducting “ direct dialogues ” in cities since around 2010 in order to attract sponsors; sometimes external companies are hired for this. In 2016, around 20.3 million euros were collected. Of this, around 5.9 million euros were transferred to the international secretariat. To support the work of Amnesty International, the Human Rights Foundation - Amnesty International Foundation, based in Berlin, was established in May 2003 .

The Amnesty International Annual Report is published annually and describes the human rights situation in around 160 countries and territories. The German version appears a few months later by S. Fischer Verlag .

Goals and way of working

The organization has seven goals under the motto Globalize Justice! set:

From 2005 to 2009 the international campaign “Preventing violence against women” ran against the various forms of violence against women, both on the part of the state and in the domestic environment. After a difficult and controversial internal discussion, the Organization's 2007 international council meeting in Morelos, Mexico, adopted a limited position on abortion. Complete decriminalization is to be demanded and states are to be called upon to legalize abortion in the event of rape, sexual assault, incest and in the case of grave danger to a woman's life. The organization affirms that many social factors and constraints contribute to unwanted pregnancies and thus also to the decision of women - about 26 million illegal cases worldwide every year.

In May 2016, the organization, including all of its national associations, took up the call to legalize prostitution . One campaigns for the human rights of sex workers, not for a right to sex for sale. The decision was preceded by three years of reviewing research reports from various institutions such as the WHO , UNAIDS and the UN Special Rapporteur on the Right to Physical and Mental Health and a decision by the decision-making body International Council Meeting .

Typical forms of action of the organization include:

The organization repeatedly carries out large and small, international themed campaigns, some of which are set up over several years.

Amnesty was involved in the Control Arms campaign until 2013, when the Arms Trade Treaty was signed on April 2, 2013 .

In 1988 there was an international Amnesty concert tour entitled Human Rights Now! . On December 10, 2005 - International Human Rights Day - a new music project called Make Some Noise was started. Well-known international artists, including The Black Eyed Peas , Serj Tankian and The Cure , published cover versions of John Lennon songs exclusively on the Amnesty website. In parallel to the music, specific campaigns and cases are presented there.

Criticism of the strategic approach

Governments and related commentators, who are critical of Amnesty International in their reports, have on various occasions criticized Amnesty. Amnesty, for example, For example, China , Russia and the Congo accused of one-sidedness against non-Western countries in their assessments and that the security needs (e.g. in the fight against rebels) were not sufficiently taken into account. Conversely, Amnesty was z. B. attacked by the American Jewish Congress after criticism of Israeli politics in the Gaza Strip . When an Amnesty report in May 2005 placed the United States at the forefront of human rights violations (see Guantanamo Bay Naval Base Detention Center ), a White House spokesman described this as ridiculous and claimed that the information provided was incorrect.

In addition to allegations of one-sidedness, there were critical voices complaining that Amnesty was too focused on public relations. In 2002, law professor Francis Boyle (former AI executive committee member in the USA) accused Amnesty that publicity would come first , then donations and members would be recruited, there would be internal power struggles, and human rights as The goal would only come at the end.

At the international council meeting in Dakar in August 2001, it was decided to extend the mandate to also work for economic, social and cultural rights. Afterwards, some members said that AI was losing its profile and expanding its field of activity too much. AI could mutate into a "human rights general store" and lose credibility. AI should continue to focus on civil and political rights. These concerns were addressed in a 2010 BBC broadcast on the organization's 50th birthday. It alleged that Amnesty International had failed to attract any significant number of members outside of Europe, the United States, Canada, Australia and New Zealand.