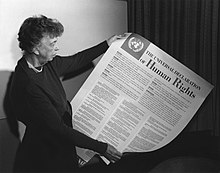 Eleanor Roosevelt with a printout of the UDHR in English (Universal Declaration of Human Rights , November 1949)

The Universal Declaration of Human Rights (A / RES / 217, UN-Doc. 217 / A- (III)) or AEMR for short is a legally non-binding resolution of the General Assembly of the United Nations on human rights . It was announced on December 10, 1948 in the Palais de Chaillot in Paris.

"All people are born free and equal in dignity and rights."

December 10th, the day of proclamation, has been celebrated as the day of human rights since 1948 .

The declaration of human rights consists of 30 articles. These contain fundamental views on the rights that everyone should be entitled to, "without any distinction, for example according to race, skin color, gender, language, religion, political or other conviction, national or social origin, wealth, birth or other status." And regardless of the legal relationship he has with the country in which he is staying. With translations in more than 460 languages according to the Office of the High Commissioner for Human Rights , it is one of the most translated texts.

The preamble already declares “ freedom , justice and peace in the world ” as the fundamental intention , and belief in basic human rights, in “the dignity and worth of the human person and in the equality of men and women ”.

The Universal Declaration of Human Rights is an ideal that should be used as an orientation, not a binding legal source of international law , because the General Assembly of the United Nations cannot create international law. As such, they are not justiciable, not enforceable. It was introduced with UN resolution 217 A (III) of the UN General Assembly. The declaration is therefore not a treaty under international law and is therefore not binding as such. Its status as a resolution also does not give it any binding effect, since according to the UN Charter only resolutions of the Security Council are binding and there is no corresponding regulation for resolutions of the General Assembly. Some articles of the Universal Declaration of Human Rights were adopted in the two international covenants on civil and political rights ("Civil Pact", BPR) and on economic, social and cultural rights ("Social Pact", ESKR), both concluded in 1966 and entered into force in 1976 ; In contrast to the UDHR, these provisions have thus become binding international agreements.

In the modern era, the formulation took place in the Virginia Declaration of Rights of 1776, which had a great influence on the United States' Declaration of Independence in the same year:

"We consider these truths to be established, that all human beings were created equal, that they were endowed by their Creator with certain inalienable rights, including life, freedom and the pursuit of happiness."

There they are already defined as "inalienable" rights. The Declaration of Human and Civil Rights of the French National Assembly of August 26, 1789 takes up these ideas and develops them further, based on the philosophical ideas of the Enlightenment that were current at the time . Some of the French constitutions adopted since then ( 1793 , 1798, 1848, 1946) begin or have started with a preamble that addresses human rights. The Universal Declaration of Human Rights refers to this legal tradition with the words “in the spirit of brotherhood” and “freedoms without any distinction” .

One of the first attempts to extend the validity of human and civil rights beyond Europe and America was the declaration of Africans' Claims in South Africa adopted by the African National Congress (ANC) on December 16, 1943 .

The declaration of human rights by the member states of the United Nations is a direct reaction to the terrible events of World War II, in which the non-recognition and contempt for human rights led to acts of barbarism. In accordance with Article 68 of the Charter of the United Nations , the UN Human Rights Commission was founded in 1946 as an expert commission of the UN Economic and Social Council . Aware of the shortcomings in the content of the Charter with regard to human rights, the first major task of the newly founded commission was to draw up an international human rights code (International Bill of Rights) . At the end of January 1947, the commission consisting of 18 experts began its work under the leadership of Eleanor Roosevelt .

The contents of the old Persian Cyrus cylinder from the 6th century BC are partially preserved . As the first human rights declaration.

The negotiating climate was already heavily influenced by the conflict between East and West . Its dimensions soon spanned the whole globe and were to trigger hundreds of wars and conflicts with massive human rights violations. Eleanor Roosevelt soon had to give up the plan for a human rights pact that was binding under international law and, in view of the constantly hardening fronts, had to decide to proceed in several stages. Initially, she only had to concentrate on drafting a non-binding declaration of human rights. The agreement on the legally binding form of an international treaty was postponed until later, because at that time it not only seemed very time-consuming, but above all unsafe in comparison to a general declaration, which would basically only be a mere recommendation. What one wanted to achieve first, however, was a definition of the stock of human rights to be protected in order to express a universal legal conception. But this, too, as soon became apparent, was to be more complicated than previously suspected. While the western states wanted to include only political and civil liberties in the declaration, the Soviet Union and other socialist states insisted on the same importance of economic and social rights. Against the background of all these differences of opinion, the version of the Universal Declaration of Human Rights, finally adopted on December 10, 1948, revealed itself to be the result of a difficult compromise and was general enough to allow for differently accentuated interpretations of human rights.

On December 10, 1948, the Universal Declaration of Human Rights was passed with 48 votes in favor, 0 against and 8 abstentions. The abstentions came from the Soviet Union , Ukraine , Belarus , Poland , the ČSSR , Yugoslavia , Saudi Arabia and South Africa .

The European Convention on Human Rights  (ECHR) of November 4, 1950 is largely influenced by the UN Charter. In the form of the Charter of Fundamental Rights of the European Union  (GRCh, 2000/2009), it formed the basis of efforts towards a common EU constitution.

In 1990 the organization of the Islamic Conference adopted the Cairo Declaration of Human Rights , the content of which differs considerably from the Universal Declaration of Human Rights, although the wording is similar. It guarantees z. B. No equality between men and women and no right to free choice of religion or spouse. It also makes all the rights presented subject to Islamic Sharia law .

In July 2010 the UN General Assembly declared the right to water a human right by a majority . However, for the same reasons as in the case of the Charter of Human Rights, this declaration is also not binding under international law.

An initiative launched in 2010 was looking for a universal logo for human rights . From July 2011, a jury selected the top ten from over 15,300 suggestions from more than 190 countries. The winning logo comes from Predrag Stakić from Serbia and combines the silhouette of a hand with that of a bird.

In Germany, the Börsenverein des Deutschen Buchhandels and the Frankfurt Book Fair , together with ARTE , ZDF and Der Spiegel , have launched a campaign alliance “WE ARE ON THE SAME PAGE” to mark the 70th anniversary of the Charter . Together they want to show how important it is to defend universal rights. Amnesty International supports the campaign, which will run from September 2018 and will culminate at the book fair in mid-October. Any person or institution can declare their support.

“Human rights are universal. They affirm the dignity and worth of the human personality. They are the basis for the work of the book and media industry worldwide. The right to freedom of expression and publication, to education, intellectual property and the right to hold meetings are essential for the functioning of our industry. We can only publish freely and unrestrictedly where human rights apply. They are the prerequisite for spreading knowledge, sharing ideas across borders, telling stories everywhere and inspiring people all over the world. 147 countries have recognized human rights, but many of them violate these universal fundamental rights every day ... We appeal to politicians to stand up for human rights without exception. "

- Declaration of the action alliance, August 2018

The connection between general human rights and environmental protection consists in the elementary “prerequisites such as food, water, a stable global climate, peace or simply life and health” for the existence of people. Food and water as subsistence level, for example, are “potentially precarious due to climate change, at least in parts of the world”.