Contracting States is a redirect to this article. For the states of the UAE see Trucial States . 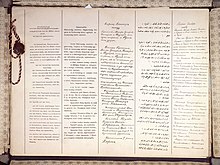 Example of an international treaty: the Brest-Litovsk Peace Treaty (1918)

International treaties are usually first negotiated by diplomats in constant contact with their governments . If there is agreement on the wording of the contract, they are initialed by the negotiators and then z. B. signed by members of the government or other duly authorized persons. In the case of bilateral contracts, the contracting parties are named alternately in the original ( alternat ).

In most cases, the contract itself determines when it comes into force. In the case of a multilateral treaty, this often (but not always) depends on the requirement of a certain number of ratifications, after which the treaty comes into force. If there is no provision in the contract regarding the entry into force, it will only come into force once all negotiating states have given their consent.

If a state subsequently joins a contract that has already entered into force, the contract will come into force for this state on accession, unless otherwise specified in the contract itself. This accession is called an accession , and the depositing of a certificate of accession is equivalent to ratification.

A contract expires if it is deemed to have been finally fulfilled due to the goals or time limits set out in the contract. The Vienna Convention on the Law of Treaties stipulates that states are free to terminate a contract at any time if all contracting parties agree, or to allow individual contracting parties to withdraw. Without this agreement, uniliteral can only withdraw in a few cases if the contract does not contain its own provisions.

A reason for a uniliteral withdrawal from an international treaty can be given that the state or its representatives have been forced to conclude a treaty (Art. 51–52 WVK). While this provision cannot be restricted, clauses can be agreed for the other reasons in the individual contract, in which it is expressly regulated that the contract remains in force without being observed. These reasons are: error in the content of the contract if the signatory has not been adequately authorized by the state, fraud, bribery, significant breach of contract by other contracting parties, as well as fundamental change in circumstances (Art. 46-50, 60, 62 WVK).

When war breaks out, multilateral treaties between the belligerents are suspended.

Art. 32 of the Basic Law regulates the foreign relations of the Federal Republic of Germany . It reads as follows:

(1) The federation is responsible for maintaining relations with foreign states .

(2) Before the conclusion of a contract that affects the special circumstances of a country , the country must be heard in good time.

(3) Insofar as the states are responsible for legislation , they can, with the consent of the federal government, conclude contracts with foreign states.

It is disputed to what extent the states should have competencies to conclude international agreements. This dispute gains legal relevance when it comes to the implementation of international treaties within Germany. Although the federal government can conclude contracts for the whole of Germany, implementation is the responsibility of the federal states in accordance with Article 30 of the Basic Law, unless otherwise provided. If a federal state refuses to implement it, there may be a breach of contract and sanctions under international law that affect the entire state.

In a series of international agreements exist Federal State clauses , the conflicts between federal and constituent states should avoid.

From Article 7, Paragraph 2 of the Vienna Convention on the Law of Treaties (VVRK) it follows that the heads of state, heads of government and foreign ministers are to be regarded as authorized to represent. The negotiators of the subjects of international law negotiate the text of the treaty. The contract text is then initialed by the negotiators; Sometimes, because of the political importance of a treaty, it is initialed and then signed by other state organs . This signature or the one with the initials ( paraphs ) of the authorized dealers confirms that the signed text is authentic and final, i.e. corresponds to the negotiated text and can no longer be unilaterally changed.

In the domestic approval procedure in accordance with Article 59, Paragraph 2, Clause 1 of the Basic Law, the Bundesrat and the German Bundestag pass a federal law in the form of a treaty law (or “Approval Act”) (if necessary with the participation of) . The declaration of consent under international law, with which the contractual provisions become binding, takes place through ratification by the Federal President. Afterwards, the ratifications of the contracting states are exchanged or deposited with an international depositary .

In contrast to the conclusion of a treaty under international law, the termination of such a treaty is not covered by Article 59 (2) sentence 1 of the Basic Law. Since the establishment of the Federal Republic of Germany, it has been a common practice for the government to terminate international treaties without the involvement of the Bundestag.

The single-phase contract conclusion procedure, which, like the multi-phase one, is based on the constitution, is characterized by the fact that no domestic procedure is necessary. The contract becomes effective immediately upon signature by the contracting parties.

The contract with the highest geographical binding effect is the Vienna Convention for the Protection of the Ozone Layer of March 22, 1985 with 197 signatory states.