IGH is a redirect to this article. Further meanings are listed under IGH (disambiguation) . For an overview of similar institutions see International Tribunal .

Parties to the International Court of Justice can only be states , but not international organizations or other subjects of international law . Only contracting states to the ICJ Statute have access to the court. According to Article 93 Paragraph 1 of the Charter of the United Nations, these are, on the one hand, all UN members and, on the other hand, those states that are not members of the UN but have ratified the statute .

The court is only competent to decide a case if all parties involved have recognized the jurisdiction. Such recognition can take place through a declaration for the respective procedure, through reference in an international treaty or in abstract form through a declaration of submission. However, such declarations are often subject to far- reaching reservations , such as the restriction formulated in the so-called Connally reservation of the United States ' declaration of submission, which was valid from 1946 to 1986 , that the recognition of the jurisdiction of the ICJ by the USA should not apply to matters that the USA believes would be subject to the jurisdiction of their national courts. The decisions of the ICJ are binding inter partes , ie for the parties involved.

Sub-organizations of the United Nations can request legal opinions on relevant topics from the IGH with the respective authorization by the General Assembly . The General Assembly or the UN Security Council can request an expert opinion on any legal issue. Although there were only 76 judgments and 24 legal opinions by 2003 , the ICJ was significantly involved in the further development of international law .

In 2008, Germany made a declaration of submission, like 73 other states so far, and since then has been able to sue another state that has also made such a declaration in all disputes under international law or be sued by that state itself. Before that, this was only possible if there was a contractual agreement between the two parties expressly designating the International Court of Justice, or if there was at least an agreement to settle the dispute before it. Germany has excluded armed forces deployed abroad and the use of German sovereign territory for military purposes from the declaration of submission.

Luxembourg had already recognized the jurisdiction of the StIGH as compulsory in 1930 . With regard to the ICJ, Switzerland followed in 1948, Liechtenstein in 1950, and Austria in 1971. 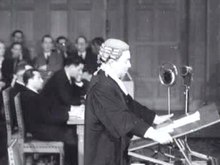 Play media file
First session of the Court after the war, Dutch cinema news from 1946

The Corfu Canal Case , a lawsuit brought by the United Kingdom against Albania, closed in 1949 , was the first case in which the Court delivered a judgment.

With the participation of German-speaking countries

Germany has called the IGH four times so far. The first case (1967–69 with the participation of Denmark and the Netherlands ) concerned mining rights in the continental shelf under the North Sea . In the second case (1972–74; the opponent was Iceland ), the fishing industry was judged. The third case was the " LaGrand Case " against the United States (1999–2001). In the fourth case, Germany filed a lawsuit against Italy in 2008 because Germany had been sentenced by Italian courts to pay compensation for Nazi crimes . Greece joined the proceedings in 2011 because Greek courts had also sentenced Germany to compensation for Nazi crimes, but the enforcement of these judgments was not permitted in Greece, only in Italy. In 2012, the court ruled that Italy had violated Germany's immunity - also because of the enforcement of the Greek claims. Italy was also condemned by the ICJ to override the court rulings against Germany.

As a defendant, Germany has so far been involved in proceedings twice. 1999–2004 it was about the Kosovo conflict . The subject of the lawsuit filed by the Principality of Liechtenstein in 2001 was the handling of Liechtenstein assets on the territory of the former Czechoslovakia , which were treated as German foreign assets in connection with the Second World War and used to settle German war debts . The proceedings ended in 2005 with the decision that Liechtenstein's claims should not be directed against Germany. The German judge Bruno Simma , who was acting at the court during the proceedings, did not take part in the decision because of personal bias, as he had previously acted as legal advisor to the German government in this case. Instead of Simma, Carl-August Fleischhauer , who had worked at the court until 2003, was an ad hoc member of the court in these proceedings .

Liechtenstein has been involved in two and Switzerland in three proceedings. Austria and Luxembourg have not yet appeared before the ICJ.

See also : List of judges at the International Court of Justice

The 15 judges of the court, who must all be of different nationalities , are jointly elected by the UN General Assembly and the UN Security Council for a term of office of nine years, with the possibility of re-election at a later date. The term of office of the judges ends on February 5th of the specified year. When electing, the states pay attention to a geographical representation of the five regions of the world that has been defined in advance in the form of agreements . This means that after a certain rotation, vacant judges' positions are filled by candidates from one region. A third of the judges are re-elected every three years. In their case law , the judges do not represent their country, but have to judge completely independently. The standard is international law.

If no national of a state involved is a member of the court in a legal dispute, a judge proposed by that state can take part in the proceedings on an ad hoc basis . Then the number of members increases to up to 17.

As of June 23, 2018, the following judges belong to the International Court of Justice:

The management of the office and the administration of the International Court of Justice and thus the administrative responsibilities are incumbent on the registrar . The Belgian lawyer Philippe Gautier has held this office since August 2019 .

UN Security Council resolutions on the International Court of Justice