The municipality of The Hague is the third largest city in the Netherlands with 547,757 inhabitants (as of January 1, 2021) on just 98.12 square kilometers. The surrounding area of ​​the urban region is called Haaglanden and has around one million inhabitants on 405 square kilometers with a further eight communities.

The place name Die Haghe or Den Hag (h) e has been used since ancient times . Since 1602/1603 the city administration officially used the name 's-Gravenhage (Eng. " Des Count Hag "), which was considered more elegant. The place was originally a hunting seat of the Counts of Holland .

Since 1990 the municipality has consistently used the name Den Haag instead of 's-Gravenhage , partly because of the internationalization of the city - The Hague is the world capital of jurisdiction - and to emphasize the relationship with the spellings in other European languages: English The Hague , French La Haye , Danish Haag , German  Den Haag (formerly also: the Hague, one met in the Hague), Italian L'Aia , Polish Haga , Russian Гаага Gaaga , Spanish La Haya , Turkish Lahey , Hungarian Hága .

However, in 1990 the proposal to officially rename the city The Hague was rejected. Since then, both names have been valid in parallel. ID cards, passports and official documents of the city contain the name 's-Gravenhage , while for example the Dutch Railways or the Cyclists Association use the shorter term Den Haag in plans and on signs .

The Hague is not officially a city, as it never received city status in the Middle Ages , and in the 19th century the distinction between village and city became administratively irrelevant.

The Hague is in the west of the Netherlands. The city center is about 6 km from the North Sea . The districts of Scheveningen and Kijkduin are located directly on the sea.

The city is part of the Randstad metropolitan area . There are other important cities in the immediate vicinity, such as Rotterdam (20 km), Leiden (15 km) and Delft (8 km). The satellite town of Zoetermeer , founded in the 1970s, is about 10 km east of The Hague.

South of the city extends to the mouth of the Rhine at Hoek van Holland, about 20 by 20 km in size Westland , a huge, contiguous greenhouse landscape in which vegetables and flowers are grown. 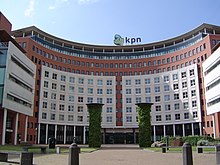 Headquarters of the KPN

The city is rich in small and medium-sized commercial and industrial companies. It is obvious that the service sector, with many offices of all kinds for a seat of government, is the economic focus; this is also the case in The Hague. The “New Babylon” office complex in the center is located in the immediate vicinity of the main train station and, thanks to its iconic design, is one of the defining buildings on The Hague's skyline. 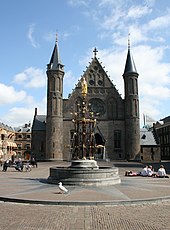 Binnenhof , the political center of the Netherlands 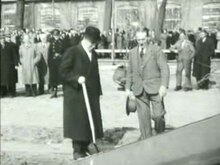 As early as the 11th century there was a village in the area around today's Binnenhof in which the Counts of Holland owned a building that they lived in or in which they only stayed overnight while passing through. In 1248, Count Wilhelm II of Holland had a castle built. However, he died before the castle was finished. His son, Floris V , had this work completed. Among other things, the knight's hall was built at this time , where the king officially opens the parliamentary session on Prinsjesdag , the third Tuesday in September, with the reading of the speech from the throne . The Haghe had been the residence of the Counts of Holland since the 14th century . Until the 17th century, Hague was only fortified with earth walls and shallow ditches; it never received formal town charter . Nevertheless, the population had some privileges, including taxes. In 1560 the place got a small town hall, and a stone town fortification was approved. However, this was not completed in time to protect the population from the threats of the Eighty Years War . The Hague was looted and burned down several times during this period.

After 1648, The Hague became the residence of the governor of the Republic of the Seven United Provinces . A period of great prosperity now dawned. Johann Moritz von Nassau had the Mauritshuis (now a museum) built. Elegant houses were built for the court, members of the government and foreign state representatives. Many of these houses, built between 1750 and 1900, can still be found all over the city center. One advantage of this was the fact that The Hague was not a walled fortress city and the new building was therefore not subject to any restrictions. King Ludwig Bonaparte officially declared The Hague a city in 1806. In the 20th century, many apartments for civil servants and simple people were added, including the painter's quarter ( Schilderswijk ) , which is now considered "problematic" .

The city had been spared wars for over 300 years until the beginning of the Second World War , on May 10, 1940, when German paratroopers attacked the city. It was their task to take over the Dutch government center “in a flash”. This project failed because of the (exceptionally) sufficient military defense there. It was only after the Netherlands surrendered on May 15 that the German Wehrmacht marched into The Hague. Arthur Seyß-Inquart , appointed by Adolf Hitler as Reich Commissioner for the occupied Dutch territories , soon took his seat in the knight's hall. The prison in the Scheveningen district was now used to imprison political opponents, including many resistance fighters . It was nicknamed the Oranje Hotel by them . On March 3, 1945, British bombers wanted to carry out an air raid on German V2 launchers in The Hague. Due to a suspected navigation error, the bombs hit the Bezuidenhout residential area . Around 500 people were killed in the process; 3000 houses were destroyed.

On September 13, 1974, members of the Marxist-Leninist terrorist group Japanese Red Army stormed the French embassy in the city and captured the ambassador and ten other people. Police officer Hanke Remmerswaal was shot in the back during the attack. The hostages were released after paying a ransom of $ 300,000 and ensuring safe passage to an airplane.

Even after 1990, numerous eye-catching new buildings were built, including some ministerial offices near the main train station. This includes the Hoftoren (“Hofturm”), with 142 meters the third highest skyscraper in The Hague, which has been nicknamed “Füller” ( de vulpen ) by the population because of its architecture and its 29 office floors mainly from the Ministry of Education, Culture and Science are proven. The 88-meter-high Zurichtoren was also appropriately named " Citrus Press " ( citruspers ), while the 104-meter-high Castalia , which houses the Ministry of Public Health, Welfare and Sport, is called "Boobs of the Hague" (tieten van Den Haag).

On the other side of the main station, the up to 109 meters high (128 meters including the tower) building complex Prinsenhof with the Prinsenhoftoren ("Prinzenhofturm") was added from 2005 .

In the late 20th century, the planners thought about the canals . Some canals that were filled in or overbuilt have been restored, so that canal tours have been possible since 2003.

Allocation of seats in the municipal council

The Hague has had a partnership with Wenzhou , China , since 2014 .

Organization for the Prohibition of Chemical Weapons (OPCW)

The Hague is the headquarters of a large number of national and international (150) institutions, including: 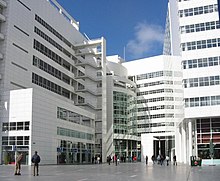 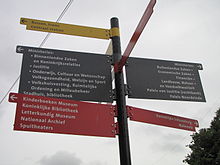 The Hague is located on two motorways of European importance. The A 12 is the continuation of the German A 3 motorway coming from Frankfurt am Main , Cologne and the Ruhr area . The A 12 runs right through the heart of the city. The A4 connects Amsterdam with Rotterdam and the Belgian metropolises Antwerp and Brussels and continues from there to Paris , France. The Hague is on the German-Dutch holiday route Oranier Route .

The city has two large train stations : the modern terminal station Den Haag Centraal (main station) and the through station Hollands Spoor with historical architecture worth seeing, for example the “ Princely Waiting Room ”.

The first tram in the Netherlands opened in The Hague in 1864. Today the Hague tram network is one of the most extensive in Europe. In 2004 - after great difficulties in construction - a new tunnel for the tram went into operation under the city center. Local public transport is operated by HTM .

The Hague has an international airport, Rotterdam The Hague Airport , which is shared with the neighboring city of Rotterdam. The major airport Schiphol near Amsterdam is only fifty kilometers away, is easily accessible by train and has a much larger number of passengers. In addition, there is the Valkenburg military airfield east of The Hague , which for security reasons is also used for flights by the government and the royal family.

The Scheveningen district has a seaport that is mainly used for fishing trawlers and pleasure craft. The city is also connected to the closely knit network of Dutch inland waterways via canals .

Districts of The Hague

The districts (wijken) of The Hague

The Hague is divided into districts (stadsdeel / stadsdelen), districts (wijk / wijken) and neighborhood quarters (buurt / buurten). In 1988 the classification that had existed since 1953 was changed. Since then, The Hague has been divided into the following eight districts:

Leidschenveen-Ypenburg has only been part of The Hague since 2002, when it took over parts of the neighboring communities of Leidschendam , Rijswijk , Nootdorp and Pijnacker in order to develop two new residential areas there. At the same time, part of the municipality of Wateringen was incorporated into the Wateringseveld district (around 8,000 apartments) belonging to the Escamp district.

Each district has its own district office, which facilitates the handling of community and organizational matters, such as registration, community taxes, individual district issues, etc.

→ Main article : List of personalities from the city of The Hague

Commons : The Hague  - Collection of images, videos and audio files

Municipalities of the province of Zuid-Holland