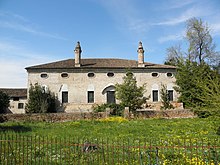 An early example: the Este family's "casino di caccia" in Arquà Polesine from the 15th century

Hunting Lodge on Epping Forest from 1542

A hunting lodge is a palace in a zoo or a hunting area (forest, field or lake), which was mainly used to accommodate the ruler and court when hunting in the region. But there are also smaller facilities, also called hunting lodges, which can only offer a few people temporary accommodation, even if they were built in a feudal setting.

The banquet that ended the hunt was usually celebrated in the hunting lodge , sometimes it was also used for parties and similar events.

The name is often equated with the pleasure palace - especially since the hunt among the feudal aristocrats was not primarily a source of food, but primarily a leisure activity - but the pleasure palace and hunting palace differ both in function and architecture. Pleasure castles are free in their equipment program, but they can also be used for hunting (such as the Amalienburg in the Nymphenburg Palace Park , Falkenlust in the Brühl Palace Park or Clemenswerth ), but they don't have to, while hunting castles are always related to the hunt: this can be done through antlers and other trophies happen, through hunting paintings, but also through the conscious display of wood or natural materials; Incidentally, hunting locks can be sumptuously furnished.

A distinction must also be made between small, intimate hunting castles for private use and the large courtly ones, which were used to hold court hunts lasting several days and to accommodate a large retinue of guests and staff, such as the hunting castles of Augustusburg , Moritzburg and Hubertusburg in Saxony . In contrast to pleasure castles, half-timbered buildings or log cabins were not uncommon for intimate hunting castles, but what have been preserved are the stone buildings that today determine the understanding of the hunting lodge.

Many medieval royal palaces were already related to hunting due to their proximity to imperial forests , which, as royal property, were banned forests ; admittedly, they also served as (temporary) residences, for holding court and imperial diets and as places of jurisdiction. The castles of Emperor Frederick II in Castel del Monte and Gravina di Puglia were probably purely hunting castles . The Hunting Lodge of Henry VIII at Epping Forest from 1542 is a preserved half-timbered building from the Renaissance period .

The hunting lodge almost always includes stables and utility buildings to accommodate hunting gear , carriages and entourage . While larger hunting lodges can form self-sufficient ensembles, smaller complexes called hunting lodges are often built in palace parks and gardens, or at least within reach of the residence of the respective prince .