Family coat of arms of those of Este 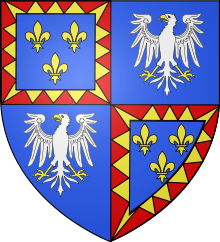 The Estonians go back in the male line to the Otbertiner ( Italian: Obertenghi ), one of the oldest Italian noble families , since 951 margraves of Eastern Liguria , from approx. 1000 margraves of Milan , Tortona and Genoa .

Alberto Azzo II of Este (* 997, † 1096/97), Margrave of Milan, married the heiress of the Swabian Guelphs ; his sons founded the two main lines of the sex: The older line is the "House Welf-Este", which rose to become Dukes of Bavaria in 1070 and from which the House of Hanover descends, which still exists today.

The younger line "Fulc-Este" ruled Ferrara from 1240 to 1597 and Modena from 1288 to 1796 , since 1452 as dukes of Modena . Members of this family were important patrons of the Renaissance period . This line expired in 1803 and was inherited by the Habsburg branch line Austria-Este.

It was the philosopher and polymath Gottfried Wilhelm Leibniz who, in his genealogical studies commissioned by the Welfenhaus in 1688, demonstrated the common origin of the two houses and with the marriage of the heir to the throne Rinaldo d'Este with Princess Charlotte Felicitas of Hanover also a small 'reunification' of both Arranged family branches.

The origins of the house are unclear, the family probably came from the Franconian nobility and settled in Lombardy in the late Carolingian period . The oldest known ancestor is a Margrave Adalbert around 900, whose son Otbert (Oberto) I († 975) was an ally of Margrave Berengar II of Ivrea in 945 , who was elected King of Italy in 950 . Thereupon he appointed Otbert in 951 to the Margrave of Eastern Liguria ("Otbertinische Mark", Italian: "Marca Obertenga"). Otbert (Oberto) founded the Otbertiner ( Obertenghi ) dynasty , and his move to the side of Emperor Otto I the Great secured the position of the family beyond the fall of Berengar. His son Otbert II († after 1014/21) became Count Palatine of Italy, Margrave of Milan , Tortona and Genoa.

The once extensive territory of the Otbertiner was reduced and fragmented through inheritance divisions and disputes with other families, but also through the pressure of the emerging cities ( Milan , Genoa , Piacenza , Tortona , Pavia , Bobbio, etc.). The descendants of the Otbertiner in the male line split up into various branches of the family under different names, some of which came up to modern times . In addition to the Estonians, these are the Malaspina and the Pallavicini , each of whom inherited smaller remnants of the former Otbertine marrow.

Albert Azzo II and his first wife Kunigunde, heir to the Guelphs

Otbert II's grandson Alberto Azzo II (* 997, † 1096/97), Margrave of Milan, built the castle of the same name near the city of Este in 1056 and named himself after her. This gave rise to the Este branch from the Otbertines.

He had three sons from two marriages who formed the different lines of the family:

The Fulc-Este in Ferrara and Modena 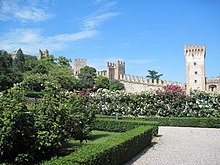 Ducal palace in Modena , commissioned by Francesco I in 1634

After the death of his father in 1097, Fulco I. d'Este (1070–1136) inherited the Italian estates of the family, the focus of which was in Veneto around Mantua , Padua , Treviso and Verona (without including these free cities themselves) while his older half-brother, the Bavarian Duke Welf IV , received the property north of the Alps. However, this division was not recognized by Welf IV. It was only under his grandson Heinrich the Lion in 1154 in a contract between Welf-Estonians and Fulc-Estonians that the Italian goods were finally awarded to Fulco's heirs. Fulco and his descendants named themselves after the castle Este in Veneto, but they did not have the title of margrave until 1171, before they were lords of Este and imperial legates. Fulco himself made his first connections with the nobility of Ferrara , whose rule the Estonians acquired a century later.

The Fulc-Este acquired new territories in the following years: Azzolino d'Este had inherited the large property of this family in the city from Guglielmo Adelardi from Ferrara as early as 1146. Azzo VI. († 1212), first Margrave of Este, was elected Podestà of Ferrara in 1196 , an office that the following generations also exercised. In 1210 he was appointed hereditary Margrave of Ancona by the Pope . In 1239, the Estonians finally moved their headquarters to Ferrara. The communal era in the city ended with Obizzo II. D'Este , he became Signore of Ferrara in 1264 , of Modena in 1288 and of Reggio nell'Emilia in 1289 . The city of Este itself was occupied several times during the reign of Emperor Frederick II in the battles between loyal to the emperor and loyal to the papacy (" Ghibellines and Guelphs "); the margraves had taken the guelfish (papal) side. In 1275 Este came to Padua and in 1405 with Padua to the Republic of Venice .

Over the next three centuries, the Estonians built Ferrara into one of the leading economic powers and a center of culture and art. After the popular uprising of 1385, they built the Castello Estense as a fortress and residence. Borso d'Este got from Emperor Friedrich III. 1452 the title of duke for Modena and Reggio and in return received both from him as imperial fiefs (as part of " imperial Italy "); In 1471, Pope Paul II gave Ferrara the same title as a papal fiefdom.

The writing from the Carolingian period established a bond with the King of France. In the Italian wars of the Renaissance this partisanship withstood two tests with some stubbornness: Between 1495 and 1498, apart from the Estonians, only the Republic of Florence was loyal to France. In the course of the war between 1510 and 1512, contrary to expectations, the house escaped total ruin, while French arms aid dwindled.

The legitimate line of the family died out with Alfonso II d'Este in 1597. Since his three marriages had remained childless, he made his cousin Cesare d'Este , the son of his uncle Alfonso d'Este , Margrave of Montecchio, his heir. Pope Clement VIII did not recognize this heir due to Alfonso's birth outside of wedlock, so in 1598 he incorporated Ferrara as a settled fiefdom and incorporated it into the Papal States. In 1577 Alfonso II sold the margraviate Vignola near Modena to Pope Gregory XIII. or to his son Giacomo Boncompagni . Thus the "bastard line" Este was limited to the imperial fiefdom of the Duchy of Modena .

The main residences of the dukes were (until 1598) the Castello Estense in Ferrara and the Ducal Palace in Modena (built from 1634). Pleasure palaces, known as Delizie , are located in Reggio nell'Emilia , Sassuolo , Ferrara ( Palazzo Schifanoia , Villa della Mensa, Belriguardo), Portomaggiore (Delizia del Verginese in Gambulaga), Mesola , Fossa d'Albero , Vigarano Mainarda , Palazzo Pio in Tresigallo , Zenzalino, Villa Rivalta (with Villa Rivaltella and the Casino) near Reggio, Medelana, Montagna di San Giorgio, Costabili, Copparo and some other places. The Este art collection, the Galleria Estense with works from the 14th to the 18th century, and the Biblioteca Estense are located in the Palazzo dei Musei in Modena (at 337 Largo Porta Sant'Agostino).

Also very well known is the Villa d'Este in Tivoli near Rome, a former monastery that Cardinal Ippolito II. D'Este (1509–72) rebuilt and furnished it with extensive Renaissance gardens.

In the wake of the French Revolution , the two duchies were declared a Cispadan Republic in 1796, which became part of the Cisalpine Republic the following year . The Este family was compensated for the loss of the Duchy of Modena with the Habsburg possessions of Breisgau and Ortenau in the Peace of Lunéville in 1801 ; In 1803 the last duke, Ercole III, died. d'Este without a male heir. The Fulc-Este line died out with him.

Ercoles III. Daughter Maria Beatrice returned this inheritance to the Habsburgs and together with her husband Archduke Ferdinand Karl became the founder of the Austria-Este line . She had also inherited the Duchy of Massa and Carrara from her mother , also a remnant of the "Otbertinian Mark", which was passed on to the descendants of Malaspina . The Breisgau and Ortenau were also lost in 1805, when the new elector and later (from 1806) Grand Duke of Baden took over the rule. After the Congress of Vienna , the Duchy of Modena and Reggio was returned to the Habsburg heirs of the House of Este. The last duke from the Austria-Este family was Franz V. In 1859 he had to leave his country for the second time and Modena was decided upon by the population and with the approval of Napoleon III. incorporated into the Kingdom of Sardinia-Piedmont . Since then, Franz lived alternately in Vienna and on his estates in Bohemia . In 1859/60 the duchy finally went under in the course of the Risorgimento and the establishment of the Kingdom of Italy .

Franz V died in Vienna in 1875. He did not bequeath the title and his fortune to his niece, Archduchess Marie Therese , who later became King Ludwig III. von Bayern was married, but offered Archduke Karl Ludwig , a younger brother of Emperor Franz Joseph I , to appoint one of his two sons as heir to his Bohemian estates and as pretender for Modena - on the condition that he be named "Austria- Este ”, although he did not come from that branch. From 1875 his son, Archduke Franz Ferdinand of Austria-Este (born 1863), bore the name. After the death of Crown Prince Rudolf , Franz Ferdinand also became heir to the throne of Austria-Hungary in 1896 . After the assassination of Franz Ferdinand in 1914, the name "Austria-Este" went on his great-nephew Archduke Robert (born 1915), son of the later Emperor Charles I on. Robert's mother, Zita von Bourbon-Parma , daughter of Duke Robert I of Parma , was a great-granddaughter of Maria Theresa of Savoy , Duchess of Parma and Lucca, daughter of Maria Theresia of Austria-Este , Queen of Sardinia, who in turn was daughter of Maria Beatrice d'Este and Archduke Ferdinand, who were the founders of the Austria-Este line. So there is at least a direct descent in the female line.

Lords and Margraves of Este 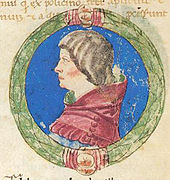 Lords of Ferrara, Modena and Reggio

Duchesses of Massa and Carrara