This article explains the city, for other meanings see Ferrara (disambiguation) .

Ferrara is a northern Italian city in the eastern Po Valley , in the Emilia-Romagna region and capital of the province of the same name and seat of the archbishopric. The city lies on the right bank of the Po , the arm of which Po di Volano flows right through the city. Ferrara is an economic and cultural center and a large university city; the university, founded in 1391, is one of the oldest in Europe.

Ferrara emerged in the early Middle Ages and is one of the few major Italian cities that was not founded by Rome. Your entire medieval city wall is intact and almost intact. The current urban structure dates back to the 14th century when the town was ruled by the Este family. The expansion of the city center, designed by the court architect Biagio Rossetti , is considered to be the first modern urban planning in the world. The historic city center of Ferrara has been recognized by UNESCO as a World Heritage Site. 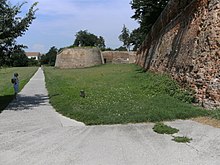 Corso Ercole I d'Este in the Renaissance old town

Ferrara is one of the few large cities in Italy that are not of Roman origin. The place was probably founded as a settlement of the residents of the lagoons at the Po estuary. He was first mentioned in a document by Aistulf from 753 or 754 and was part of the Exarchate of Ravenna . After 984 it was a fiefdom of Tedalda, Count of Modena and Canossa, a nephew of the Roman-German Emperor Otto I. Afterwards Ferrara became independent and in 1101 after a siege it was taken by Margravine Matilda . At that time, the city was dominated by a small group of important families, including the Adelardi.

Guglielmo, the last of the Adelardi, died in 1146. His property, like the dowry of his niece Marchesella, passed to Azzolino d'Este. In the battle of Legnano in 1176 against the Roman-German Emperor Friedrich Barbarossa , Ferrara took part with its own contingent of troops. There was enmity between the newly arrived family and the Sailinguerra, but after extensive fighting, Azzo Novello was made permanent Podestà in 1242 . In 1259 he captured Ezzelino da Romano of Verona in battle. His grandson Obizzo II succeeded him and the Pope appointed him captain general and defender of the Papal States . From then on the House of Este was nested in Ferrara. The Po, which flowed directly past Ferrara in the 12th century, paved a new path north of the city in 1155, which made the old river bed increasingly shallow. In 1391 the University of Ferrara was founded. Niccolò III. received several popes with great pomp, especially Eugene IV , who held a council here in 1438 . His son Borso received in 1452 (that year Girolamo Savonarola was born here) from Emperor Friedrich III. as the first duke the fiefs of Modena and Reggio . In 1471 he was appointed Duke of Ferrara by Pope Paul II .

Ercole I waged war with Venice and contributed greatly to the city's prosperity. His son Alfonso I married Lucrezia Borgia and successfully continued the war against Venice. In 1509 he was excommunicated by Julius II and attacked the papal army outside Ravenna in 1512 , which he then captured. Gaston de Foix fell in the battle in which he supported Alfonso. Alfonso was able to make peace with the subsequent popes. From 1518 he was the patron of Ariostus .

His son Ercole II married Renata , a daughter of Louis XII. from France. He also beautified the city during his reign (1534–1559). From 1536 onwards it offered the Jews expelled from Spain and Portugal a new home, because this promoted trade and thus the prosperity of Ferrara. From 1536 to 1554 the city became an important port of call for Sephardic Jews. A rabbinical congress was held in Ferrara in 1554, and a Jewish university was founded two years later. The laws that Ercole introduced to protect the Jews were considered the most progressive in Italy. His wife, however, was a supporter of the Reformation and friends with the evangelical teacher Fulvio Pellegrino Morato and his daughter Olympia Morata (1526–1555). She opened the court of Ferrara to religiously persecuted intellectuals from Central Europe, especially from France. So came the French poet Clément Marot in 1535 , Johannes Calvin in 1536 , Vittoria Colonna and Bernardino Ochino in 1537 and Celio Secondo Curione , Camillo Renato and Aonio Paleario in 1540 . Renee's sympathy for Protestantism led to a break with Ercole, the Duchy of Ferrara in his part of de jure to the Papal State was one and naturally a cautious policy towards the Pope had to drive. In 1554 he had his wife put under house arrest in Palazzo Estense (Pareschi). Further steps in his pro-Catholic partisanship were an alliance treaty with France in 1556 and a peace treaty with Spain in 1558 .

His son Alfonso II married Barbara , a sister of Emperor Maximilian II. Under him, Ferrara reached its economic and cultural climax. He was a patron saint of Tasso and Guarini . As the princes of his house had always done, he promoted the arts and sciences. He had no legitimate male heir, so in 1597 Ferrara was claimed by Clement VIII as a vacant fief, as was Comacchio . The Estes had to leave the city in 1598. In order to enable the integration of the Ferrarese into the papal system of rule, Clement VIII raised Carlo Emanuele Pio di Savoia and Bonifazio Bevilacqua to the cardinal status as members of the Ferrarese family . Clement VIII built a fortress on the site of Tedalfo Castle on the west side of the city . With the exception of the Napoleonic period, the city remained part of the Papal States, even when the Austrians occupied the fortress between 1832 and 1859 . After that, the city became part of the Kingdom of Italy .

On May 20, 2012, a 6.0 magnitude earthquake caused severe damage in Ferrara and the surrounding area. The earthquake severely affected buildings and works of art of great cultural and historical importance. In Ferrara, the "lion tower" of Castello Estense was badly damaged. The Museo Giovanni Boldini and the Church of San Carlo also suffered severe damage.

Ferrara became internationally known through the work of the writer Giorgio Bassani . The film The Garden of the Finzi Contini , based on the novel of the same name by Bassani, is set in Ferrara. 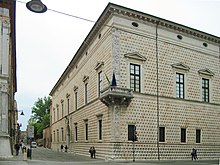 In the center of the old town, surrounded by walls, the Castello Estense stands out, a four-tower moated castle that was begun in 1385 and partially renovated after 1554. To the southeast of the Castello is the Romanesque-Gothic Cattedrale di San Giorgio with its unfinished campanile (begun in 1135). The cathedral museum is located above the porch of the cathedral. At the south corner of the Castello is the Piazza Savonarola with the monument to the city's great son. Behind it is the Palazzo Comunale, the former residential palace of the Este, built from 1243 and in the 14th / 15th centuries. Rebuilt in the 19th century.

There are also several noble palaces, mainly from the Renaissance . Palazzo dei Diamanti , a magnificent building with its facade of thousands of white and pink marble pyramids, also known from art exhibitions of international renown, as well as the Palazzo Schifanoia , with its frescoes in the Sala dei Mesi (monthly hall). South of the Schifanoia is the unfinished Palazzo Costabili , which today houses the Museo Archeologico Nazionale.

Every year at the end of May, the Palio , a horse race between the individual parts of the city in historical costumes , takes place in the historic city center in magnificent Renaissance costumes. It is the world's oldest Palio, mentioned in a document in 1279, but the race took place at least 20 years earlier. The festival is dedicated to Saint George , but especially wants to remember the Palio of 1471 in honor of Borso d'Este, who received the title of duke and other privileges as a result of a trip to Rome from Pope Paul II .

Even in the run-up there are other framing events, such as the bringing of candles and the blessing of the Palii - the painted cloths that the winners of the four races receive as a prize - or the old flag games, a competition for musicians and flag throwers, as well as a historical parade.

The Teatro Comunale, the city's opera house, opened in 1798. In 2014 it was renamed the Teatro Claudio Abbado .

The Buskers Festival has been taking place at the end of August since 1988, a large street music festival that recently attracted over 800,000 visitors. According to the company, it is the biggest event of its kind in the world.

As the United Kingdom leaves the EU , the headquarters of the European Union Youth Orchestra will be relocated from London to Italy in 2018 . For three years the orchestra will reside in Ferrara in spring and autumn. The first season in Ferrara opened on March 30, 2018 with a concert at the Teatro Claudio Abbado.

The petrochemical and chemical industries, tourism and the food industry are economically important with the Eurofrut fruit fair .

The University of Ferrara , which was founded in 1391, now has around 15,000 students. The Girolamo Frescobaldi Conservatory is a music academy founded in 1870 .

The renaissance old town, surrounded by a nine kilometer long city wall, can only be visited on foot or by bike. Due to the high proportion of bicycle traffic , Ferrara is considered a bicycle city .

A passenger who arrives by train immediately sees a sea of ​​parked bicycles on the station forecourt. Ferrara is a bicycle city and is a member of the European Cities for Cyclists , which has 30 member cities from 14 countries. According to a survey carried out after the turn of the century, 89.5% of local people use bicycles to get around, and Ferrara's citizens own an average of 2.8 bicycles per capita. Official bicycles are available to the mayor and city councilors. More than 30 percent of the journeys in Ferrara are made by bike. This value is comparable to Amsterdam. Ferrara is therefore the most bicycle-friendly city in Italy. Wide pedestrian zones, numerous medieval alleys and the nine-kilometer-long city wall, on which you can cycle without interruption, invite you to cycle. In contrast to northern European cities, driving quickly on bicycles is not part of the everyday street scene. You cycle comfortably, also side by side, to chat. In Ferrara, cycling is considered the best way to get to know the city and its medieval streets and corners. Many hotels offer bicycles for their guests, and there are numerous bicycle rental shops in the city.

The weather in winter is mainly cold and humid. Despite frequent sub-zero temperatures and frost, there are seldom snow-covered roads due to the proximity to the sea. The summers are hot and very humid due to the high humidity (rarely below 70 percent). Occasionally there are heavy rains, sometimes violent storms. From November to February it is mainly foggy (Ferrara, along with other cities in the Po Valley, is one of the Italian cities with the most average fog). Spring is generally mild and pleasant and invites you to explore the city by bike.

The local football club SPAL Ferrara will play in the top Italian division, Serie A , again in the 2017/18 season after almost 50 years .

→ Main article : List of personalities of the city of Ferrara

An airship built in 1913 was named Città di Ferrara .

Municipalities in the province of Ferrara in the Emilia-Romagna region