Palmaria seen from the mainland

Palmaria (in Ligurian : A Parmæa ) is an Italian island at the western end of the Gulf of La Spezia . The island lies in front of the Ligurian municipality of Porto Venere , from which it is separated by a strait ( Le Bocche ). Palmaria forms with the islands of Tino and Tinetto an archipelago called Arcipelago Spezzino , whose territory belongs to the municipality of Porto Venere.

Since 1997 Palmaria has been a UNESCO World Heritage Site together with the two islands of Tino and Tinetto as well as Porto Venere and the Cinque Terre . 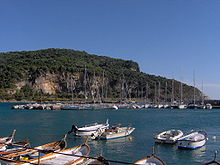 Palmaria as seen from the port of Porto Venere

The strait of Le Bocche between Palmaria and Porto Venere

With an area of ​​6.5 square kilometers , Palmaria is the largest of the three islands in the Gulf of La Spezia and the entire Ligurian Sea . It has a little over 50 inhabitants. The two islands of Tino and Tinetto are located a few hundred meters south of Palmaria and form an almost linear chain of islands with it.

The island itself is in the shape of a triangle . The two sides that face Porto Venere and the Gulf of La Spezia are the most exposed to human influence. They slope gently towards the sea and are covered by typical Mediterranean vegetation . The western side, which faces the open sea, is characterized by high cliffs , which in turn are criss-crossed by numerous grottos . On the two colonized sides of the island there are some private apartments, two restaurants, a trattoria and various bathing establishments. The latter are partly public, partly reserved for members of the Italian Navy and the Italian Air Force .

On the less accessible western side of the island are the Grotta Azzurra (only accessible by boat) and the Grotta dei Colombi , which can only be reached with suitable climbing equipment . The Grotta dei Colombi is of greater historical importance, as skeletons of animals from the Pleistocene , for example chamois and snowy owls , as well as the remains of human graves have been found in it. The latter are said to be over 5000 years old.

There are numerous historical buildings on the island. Forte Umberto I and Forte Cavour are located on the highest point of Palmaria, but they are not accessible due to their location in a restricted military area . At Punta Scuola there is a prison building from the 19th century that has recently been restored and converted into a museum. Spread over the entire territory there are various bunkers from the Second World War and remains of coastal and anti-aircraft guns overgrown by vegetation . There is a lighthouse near the two forts .

The old quarry in the southern section of the island is also worth mentioning . In the past, black limestone, the Nero Portoro , was mined here. You can still see an old crane, a pulley system for transporting the stone blocks and the ruins of the workers' quarters.

The island has a typical Mediterranean climate . Temperature deviations are rare and of moderate extent.

In winter there are extremely seldom major cold spells or frost . In summer, on the other hand, the increased temperatures are made bearable by a constant sea ​​breeze . The precipitation curve corresponds to that of the Riviera di Levante with peaks in spring and autumn.

The flora of Palmaria includes around 500 species . The original flora, which largely consisted of macchia and an oak forest , has been changed over time by human intervention. In addition to slash and burn and agricultural use, the introduction of the plane tree , the palm tree and the release of rabbits had greater effects on the flora.

Other important plant formations are the milkweed macchia (from Euphorbia dendroides ) and the sea ​​fennel ( Crithmum maritimum ) on the cliffs that are wetted by seawater . Among the flowers, the knapweed Centaurea cineraria veneris , the umbellate flower ( Iberis umbellata var. Linifolia ) , which only occurs on Palmaria, and the Centaurea aplolepa, which occurs endemically in Eastern Liguria, are worth mentioning. In addition, the coming on the island cabbage Brassica oleracea robertiana and rare in Liguria Gray Hairy Rockrose before.

Palmaria can be entered with private boats. In the summer months there are ferry connections between the island and Porto Venere, Lerici and La Spezia .