The Venice lagoon is a lagoon in the north of the Adriatic, largely separated by headlands and islands . It originated around 4000 BC. Chr. By deposits of Brenta and on the other the Po valley draining rivers. In it lies the city of Venice .

Map of the islands in the lagoon

Satellite image of the lagoon in 2001 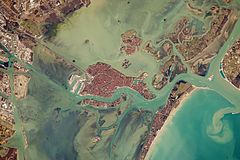 Satellite image of the lagoon 2016

The lagoon stretches from the river Sile in the north to the Brenta in the south and has an area of ​​approx. 550 km² . Around 8 % of the surface consists of islands (including Venice itself and a number of smaller islands), only 11% is permanently covered by water (including the various canals), the rest consists of the fishing grounds , the vast majority consists of mudflats and marshland . The lagoon forms the largest wetland area with a connection to the Mediterranean.

The lagoon has three connections to the Adriatic Sea , which are named after the nearby cities of Lido , Malamocco and Chioggia .

Due to the location at the northern end of the long inlet of the Adriatic Sea, the water movements caused by the northern and especially the southern winds are intensified and lead to spring tides , which are known as acqua alta and regularly put Venice under water. The sister lagoon of Marano to the east has an area of ​​around 160 km².

At the time of the Roman Empire , a system of estuaries (estuary lagoons) stretched from Ravenna in the south to Trieste in the east. In the sixth century, the Romanized population sought shelter on the islands of the lagoon from the invasions of the Huns and other eastern peoples. Due to its protected location, the Republic of Venice developed into an important naval power. The important seaport , the former shipyards of the Arsenale and the fishing grounds of the lagoon, which are developing into modern aquaculture , still exist today .

Six thousand years ago, the rising sea level towards the end of the last ice age flooded the upper Adriatic coastal plains, while the deposits of rivers partially counteracted this. The large amount of sediment from the Po was driven along the coast by ocean currents and closed off bays from the Adriatic with offshore sandbanks.

In the fifteenth and sixteenth centuries, the rivers that flow into the lagoon were diverted to keep the lagoon free from further debris and the extraction of groundwater led to subsidence . Swampy islands have been drained to make them habitable and some have been completely rebuilt. The port of Mestre in particular has been enlarged through land reclamation. Many islands used to consist only of sandbanks and dunes; so are the elongated islands of Lido di Venezia , Pellestrina and Cavallino-Treporti , which form the coastal strip .

The lagoon has been settled for a long time, but it was only after the fall of the Western Roman Empire that enough people from the hinterland settled on the islands to create the city of Venice. In addition, Chioggia emerged at the southern end of the lagoon and the islands of Lido and Pellestrina were settled.

The economic center with port and airport is now on the western mainland, where the majority of the population lives in the formerly independent cities of Mestre and Marghera .

At the northern end of the lagoon are the famous resorts of Jesolo and Cavallino-Treporti .

The northern part, around from Torcello , contains mainly fresh water and is hardly reached by the tide change. It is therefore called laguna morta ('dead lagoon'). The salt water lagoon, whose water level falls and rises with ebb and flow, and which is washed through by seawater, is called laguna viva ('living lagoon').

Without further human intervention, the central parts of the lagoon around Venice would be transformed into a deeper water basin and some sandbanks and salt marshes ( barene ) would disappear in it. Because some smaller rivers, which originally flowed into the lagoon, were diverted directly into the Adriatic by the Republic of Venice to prevent silting up. This gave the city its protection from the surrounding water. But only a small amount of sand, silt and rubble was brought in, material that slowly escaped through the outlets to the Adriatic Sea. This development was exacerbated in the 19th and 20th centuries by the fact that the exits for the ships, which had grown considerably, especially those of the industrial region around Mestre and Marghera , were greatly widened and deepened. A lack of supplies and increased erosion constantly changed the lagoon. The lagoon loses around 500,000 m³ of land every year.

Defense and economic motives have created a situation that threatens biodiversity with the disappearance of the diverse succession of salt marshes, sandbanks and shallows. The northern part, the laguna morta , silts up , while the water basin in the south, the laguna viva , becomes deeper and more hostile to life. While the marshes are growing in the north, the regular dredging of the approaches to Mestre and Marghera aggravates the situation in the south. In addition, groundwater is pumped out, which further lowers the lagoon floor.

For some years now, food competitors have also appeared, which have now acquired considerable economic importance, such as the Philippine clam . The so-called Caparozzolante dig up the lagoon floor with their catch baskets and thus aggravate the loss of material in the lagoon.

Protection through vegetation is of great importance. In salt marshes and on sandbanks, plants break the force of the waves and their roots hold the ground. Algae and bacteria mats slow down the loss of sand and silt.

The Philippine clam and the caparossolanti

The so-called 'Caparossolanti', the mussel men as they are called in the Venetian dialect, have been causing disaffection between Venice and Chioggia for some time. At the end of the 1980s, the Philippine clams, the 'black gold of the lagoon', were introduced by breeders and displaced the native mussels. It particularly thrives in the Chioggia waters, which are polluted and warmed up by industrial sewage. The Caparossolanti catch the mussels in high-horsepower boats with iron baskets in restricted areas and tear open the lagoon floor. Over 1000 mussel men have been working in the waters between Chioggia and Venice since 2006 and earn more than the traditional fishermen, whose livelihoods they endanger. Within 15 years, the water world of the lagoon changed due to the new species of mussel. The Caparossolanti are fought by the Venetian police in their boats called 'yellow flames', which are extremely unpopular in Chioggia. The Venetian police hunt is particularly dangerous at night. Five mussel fishermen have already died.

The mussel fishermen's boats are equipped with radar and communicate with each other so that they can work at night and in fog.

The people of Chioggia consider the Philippine clam a gift from God. You have spurred the economy of the city and eradicated crime. Fifteen years ago, the Venice prison was filled with Chioggiotti. Today the former criminals are all in the mussel business. The Caparossolanti are the new economic engine of the city, which now has more banks and jewelry stores than bakeries.

The winter high water in the city (Acqua Alta) in the lagoon is to be controlled by flood gates to protect against massive flooding . The controversial MO.SE project (for MOdulo Sperimentale Elettromeccanico ) is a three-part water dam at the exits of the lagoon and should - after several delays - be completed in June 2020 and be ready for use by the end of 2021 after final tests.

The lagoon as it exists today is a biotope made by human hands, which is subject to undesirable changes while maintaining the current conditions. It is therefore being considered to temporarily drain some rivers into the lagoon and to support the distribution of the sediments by using artificial channels.

Despite efforts to keep the lagoon clean, faeces, waste and industrial residues still end up in the water. The numerous motor boats pollute the lagoon with oil-containing fuels. 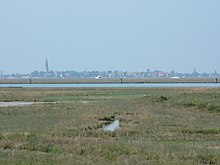 A purple heron in the lagoon

Other islands and headlands