Tarquinia is an Italian city ​​with 16,410 inhabitants (as of December 31, 2019) in the province of Viterbo in the Lazio region . It is best known for its Etruscan archaeological sites, which have been a UNESCO World Heritage Site since 2004 .

Tarquinia is 87 km north-west of Rome , 48 km south-west of Viterbo and 90 km south-east of Grosseto . The old town of Tarquinia is located on a hill above the coastal plain of the Maremma Laziale , five kilometers from the Tyrrhenian Sea . The modern residential areas extend at the foot of the old town hill to Via Aurelia . The districts of Lido di Tarquinia and Riva dei Tarquini are popular seaside resorts on the coast. The districts of Lombardi, Marina Velca and Sant'Agostino are also located in the coastal plain. The hinterland is an undulating, thinly populated hilly landscape with a few isolated farmsteads.

The former salt pans in the Lombardi district were declared a nature reserve in 2000. The Marta River flows into the sea in the municipality . The community is located in earthquake zone 3 (little risk). The neighboring municipalities are Allumiere ( RM ), Civitavecchia (RM), Montalto di Castro , Monte Romano , Tolfa (RM) and Tuscania .

Tarquinia is on the state road strada stadale SS 1 Via Aurelia , which runs along the coast from Rome to the French border at Ventimiglia . It is connected to the provincial capital Viterbo by the strada stadale SS 1 bis . The A12 Autostrada Azzurra motorway ends at the southern city limits and is planned to be continued to the north. Tarquinia also has a train station on the Pisa – Rome railway line , which is on the road to Lido di Tarquinia, four kilometers from the city center.

Tarquinia was one of the most important Etruscan cities. In the Middle Ages it became a city republic. It lost its independence in the 14th century and has belonged to the Pope's territory ever since . Tarquinia is the place of origin of what is said to be the first Etruscan king of Rome , Lucius Tarquinius Priscus . The city is said to have been founded by Tarchon .

The name of the place has changed several times over the centuries. Its Etruscan name was Tarchuna or Tarchna , the later Latin Tarquinii . From the Middle Ages it was called Corneto . The name probably goes back to the Cornelian cherry , which grows frequently in the Tarquinia area. In 1872, the city in memory of antiquity in was Corneto Tarquinia renamed and since 1922 only is Tarquinia .

North-east of today's Tarquinia and earlier Corneto, on the hill La Cività was the Etruscan city ​​of Tarchuna , which was one of the most important members of the League of Twelve Cities . The founding of Tarchuna dates back to the time of the Villanova culture, as evidenced by finds . Tarchuna was on a hill that was built in the 5th and 4th centuries BC. Was surrounded by an eight kilometer long city wall, which was a wall from the 6th century BC. Which was still drawn across the hill. What began in border battles after Livy in 359 escalated into a war between Rome and Tarchuna, which also had Faliski allies on its side. This ended in a defeat of the Romans in 358 after the devastation of Roman territory. In 353 the Romans under Rutulus and Plautius and Fabius and Quinctius triumphed over the Tarquin forces. The Tarquin and Faliski troops first returned to their cities. In 351 Tarchuna had to ask Rome for peace and received a 40-year peace treaty.

Under Roman rule, the city was given the Latin name Tarquinii. Tarquinii castle in 308 BC Another 40-year peace with the Roman Republic and was following this treaty, from 281 BC. Part of the Roman Empire. With that began their slow decline. Former tributary areas became independent from Tarquinii. The important territories of the Tolfa Mountains and the coast were directly under Rome. Around 90 BC Tarquinii received Roman city rights. In the 5th century, Tarquinii is documented as the seat of a bishop. It was destroyed by the Saracens in the 8th century . Tarquinii was not rebuilt afterwards, the inhabitants founded on the nearby, better defendable hill Corneto.

Corneto became an independent city republic in 1144, forming alliances with Genoa , Pisa and Venice . In the 13th century there was a siege by Frederick II (HRR) . In 1355 the Pope gave Corneto to the rule of Egidio Albornoz , who incorporated the city into the Papal States. From then on, the place remained a politically insignificant country town. In 1854 the diocese of Corneto was united with that of Civitavecchia . In 1870 Corneto was incorporated into the new Kingdom of Italy . 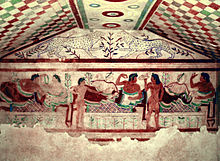 The winged horses in the Museo Nazionale Tarquiniense

Tarquinia has a well-preserved, medieval old town with numerous towers and an almost completely preserved city wall. Several city palaces have been preserved, especially from the time of the city republic.

The Tarquinia necropolis has been a UNESCO World Heritage Site since 2004 .

On the southern edge of Lido di Tarquinia is the excavation site of Gravisca , the ancient port of Tarquinia. It was re-established as Porto Clementino in the Middle Ages. Further north at the mouth of the Marta was a second port, Martanum, of which a basin is located. The ports of Algae and Rapinum have not yet been located.

A continuous silver cross on a red shield, covered with a cherry tree in natural colors with red fruits. It is a talking coat of arms , as the old name Corneto of the city means something like "grove of cornel cherries ". The coat of arms has been documented since the 14th century.