Urbino [urˈbiːno] is a town with 14,106 inhabitants (as of December 31, 2019) in the Marche region in Italy , southwest of Pesaro . It is the seat of the Roman Catholic Archdiocese of Urbino-Urbania-Sant'Angelo in Vado . Urbino is part of the world cultural heritage because of its architecture and cultural history . During the Renaissance , the city experienced a heyday, during which, among other things, the university was founded (1506). The most important ruler of the Duchy of Urbino was Federico da Montefeltro .

The municipality is located in the province of Pesaro and Urbino and extends over 228 square kilometers.

The small Roman town Urbinum Mataurense (German: the small riverside town Mataurus ) was in the 6th century during the time of the Gothic wars through an important strategic fortress in this conflict 538 Belisarius conquered, and from then on frequently by the Byzantine historian Procopius mentions . Although Pippin sold Urbino to the Pope, the city always wanted independence.

Antonio von Montefeltro († 1184?), Lord of the castle of Montecopiolo and San Leo , was appointed Imperial Vicar for Urbino by Emperor Friedrich Barbarossa in 1155 (as the territory claimed by the Emperor in Imperial Italy ). His son Montefeltrano I (approx. 1135 - 1202) was also made imperial vicar in Urbino and probably made Count of Montefeltro. In 1213 two of his sons were enfeoffed with the county of Urbino by Emperor Friedrich II . The city coat of arms is still the family coat of arms of the Montefeltro, supplemented by the imperial eagle . The counts put pressure on the city, which led to a resident rebellion in 1228, who joined forces with the people of Rimini and temporarily regained control of the city in 1234. In 1384 the city of Gubbio also submitted to the battle with its bishop, the Montefeltro. The House of Montefeltro rose in 1443 as a result of the elevation by Pope Eugene IV to Dukes of Urbino. 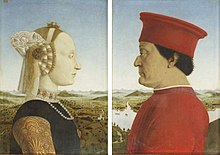 The most famous son of the Montefeltro family was Federico , ruler of Urbino from 1444 to 1482. He was one of the most successful condottieri of his time, a cautious diplomat and a promoter of art and literature. Piero della Francesca , Francesco di Giorgio Martini and Raphael's father Giovanni Santi worked at his court . Federico strengthened his position by marrying Battista from the powerful Sforza family and marrying his daughter to Giovanni della Vore, the favorite nephew of Pope Sixtus IV , who in return gave Federico the title of duke.

He was followed by his son Guidobaldo da Montefeltro , who married Elisabetta Gonzaga from the ruling family in Mantua in 1489 . Both were expelled from Urbino by Cesare Borgia in 1502 and later expropriated, but got the duchy back after the Borgias were ousted . Guidobaldo was the last duke of the Montefeltro line. After his death in 1508, he bequeathed his title to Francesco Maria I della Rovere , a nephew of Pope Julius II. Urbino was ruled by the della Rovere dynasty until 1625 .

→ see also: List of the Counts and Dukes of Urbino 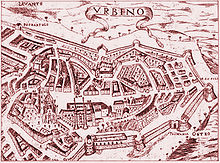 Urbino is not only equated with the city, but also with the Vicariate of Urbino.

Urban VIII finally incorporated the previously autonomous duchy of Urbino into the papal possessions in 1626 after the childless Francesco Maria II della Rovere abdicated. The great library was moved to Rome and incorporated into the Vatican Library in 1657 .

Politically, the Vicariate of Urbino was part of the Papal States . Its territory covered approximately 2,700 square kilometers. It extended in the south to Gubbio and in the north to the border of Emilia-Romagna . In the west it was bordered by the ridge of the Trabaria and the Apennines (Tosco Marchigiani) and in the east by the Foglia river . The country was predominantly mountainous and hilly in nature and offered very few natural resources. The agricultural and horse industries were also poorly developed. The inaccessible physical structure also hindered the country's unified development. The city of Urbino was to be classified as of little importance at this time due to its low economic importance. The country was also politically divided by various independent noble landlords. The lords of Urbino had to fight for real control over the vicariate again and again. Although Urbino was nominally part of the papal state, the papacy bureaucracy was virtually absent in times of economic and political crisis. For that reason alone, the power vacuum had to be filled by various noble families in the region. The Pope tried again and again to use the rivalries between the individual families for his remaining influence. However, this policy led to an increased independence of the Adriatic areas of the Papal States.

In the course of the Risorgimento , the rule of the Papal States over the Marches ended in 1860 and Urbino finally became part of the Kingdom of Italy .

The first known bishop of Urbino was Leontius, who was appointed as Bishop of Rimini by Gregory I in 592. The cathedral was not allowed to be built within the walls. This only happened in 1021 under Bishop Theodoricus. Bishop Oddone Colonna (1380) later became Pope Martin V.

The special soil of Urbino, which is still used for ceramics and brick production, made the ceramic factories ( botteghe ) and their glazes known worldwide as majolica . The first commercially available earthenware was shipped from Urbino from the 15th century, after 1520 the dukes of the Della Rovere family , Francesco Maria I and his successor, Guidobaldo II , promoted the factories whose products became known throughout Italy as istoriato . The style of fine arabesques and grottoes became known worldwide. The best known were the goods from the hand of Nicolo Pilliparios' son, Guido Fontana. 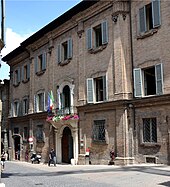 Corboli Palace; built between the 15th and 16th centuries and is currently the seat of the regional education authority. The Corboli family settled in Urbino in the 13th century; their most famous representative was Fulvio Corboli Aquilini (1762–1826)

Dome of the chapel of the former Santa Chiara monastery

The Palazzo Ducale of the Dukes of Urbino is the most important building in the city. It was built under Federico da Montefeltro by Luciano Laurana , a Dalmatian architect. Laurana was impressed by Filippo Brunelleschi's buildings in Florence . The palace was partially used as a government building in the 20th century. It houses the Galleria Nazionale delle Marche , one of the world's most important collections of the Italian Renaissance.

The old cathedral fell victim to an earthquake in 1789. The new Cathedral of Santa Maria Assunta on the Piazza Duca Federico was built on its ruins in the classical style by the architect Giuseppe Valadier and completed in 1801.

The chapel on Via Mazzini from the second half of the 14th century, originally assigned to a hospital, was given a neo-Gothic facade in 1908. The wooden vault of the oratory has the shape of a ship's hull. The fame of this church comes from the painting inside; on the right wall there are frescoes by the brothers Lorenzo and Jacopo Salimbeni, born in the Marche , with scenes from the life of John the Baptist. The depiction of the crucifixion from 1416 above the main altar is also by the Salimbeni brothers. The ensemble is one of the main works of the International or Soft Style of Gothic around 1400 in Italy. Their characteristics are playful elegance, love for precious details and a sense for phenomena of nature and landscape.

The church has a porch and a stately campanile . Behind the left side entrance is the grave slab of Raphael's parents .

Raphael's birthplace is in Via Raffaello. It is furnished with furniture from different centuries and pictures, mostly copies of important works, but also originals, such as the Annunciation scene by Raphael's father Giovanni in the Sala Grande .

The former Santa Chiara monastery now serves as the entrance hall for ISIA Urbino, an art school. The monastery was built according to the plans of Francesco di Giorgio Martini and redesigned in the 16th and 17th centuries. 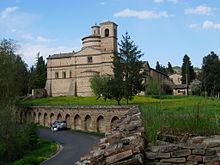 The Church of San Bernardino near Urbino

The church of San Bernardino, the burial place of the Dukes of Urbino, is located around 2.5 km outside the urban development . The building was built according to a specification by Federico da Montefeltro between 1482 and 1491 to serve as a burial place for the duke, his wife and their descendants. The architect was Francesco di Giorgio Martini , who was supported by the young and already promising Donato Bramante . Until 1840 there was an altarpiece by Piero della Francesca in the church , the Pala Montefeltro , which is now kept in the Pinacoteca di Brera in Milan.

Monument to Raphael in Urbino

Connected to the city