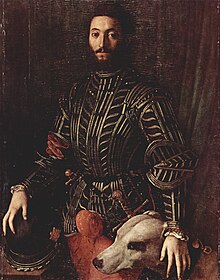 In 1532 Guidobaldo secretly took part in the army display of all the troops of the Republic of Venice , whose commander in chief was his father Francesco Maria. He fell in love with Clarice Orsini, a daughter of Giordano Orsini , but under pressure from his father, when he was 20 years old, in October 1534 he had to marry Giulia da Varano (1523–1547), heir to Giovanni Maria da Varano , Duke of Camerino to expand Della Rovere's sphere of influence in the Marche .

Guidobaldo was already Duke of Camerino when he took over the Duchy of Urbino after the death of his father in October 1538. Pope Paul III had resolutely opposed the marriage of Guidobaldo and Giulia da Varano, but had not been able to assert himself against Guidobaldo's father in this matter. After the death of Francesco Maria I della Rovere, he took energetic action, excommunicated Guidobaldo and prepared for war. The cornered duke was persuaded to renounce the exercise of government in Camerino in 1539 without venturing into a military confrontation, when he was offered recognition of his rule over Urbino and the transfer of a sum of 78,000 Scudi .

In February 1547 Giulia da Varano died, with whom Guidobaldo had the daughter Virginia (1544-1571). Barely a year later, in January 1548, he married Vittoria Farnese , daughter of Duke Pier Luigi Farnese of Parma and granddaughter of Pope Paul III. Through this dynastic connection there was a rapprochement between Guidobaldo and Paul III. Marrying into the papal family brought the Duke of Urbino various advantages, including the appointment of his younger brother Guilio della Rovere as cardinal (1548) and an extended investiture over Urbino.

If Guidobaldo entered the Venetian service as early as 1529, this connection diminished after his marriage to Vittoria Farnese, as he now oriented his politics more towards Rome and also did not have the military experience of his father, so that Venice only gave him the less attractive task of Protection from Verona . In 1552 he ended his military engagement for the Serenissima , but soon afterwards received from Pope Julius III. the office of captain general of the papal army and thus a new and important source of income. 1555 he was by Julius III. appointed prefect of Rome, a position his father had already held.

For a short time Guidobaldo also entered the service of the French King Henry II. His relationships with the noble Gonzaga family , which were loyal to the Habsburgs and with whom Guidobaldo had ties through his mother, developed more closely. But his main foreign policy point of reference initially remained the papacy. In 1560 he was able to marry his daughter Virginia to Federico Borromeo, a relative of Pope Pius IV . From the mid-1560s he shifted his dynastic orientation in the direction of closer ties to King Philip II of Spain, whose general captain of the armed forces in the Kingdom of Naples he had been since 1558. Correspondingly, Guidobaldo became a member of the Order of the Golden Fleece in 1560 . In 1566 he sent his son and heir to the throne, Francesco Maria (II), to be educated at the Spanish court.

At his court in Pesaro , Guidobaldo had an expensive and prestigious court. Here he gathered the most distinguished minds of his time, put on a collection of art treasures and developed great splendor. Among other things, he called Bernardo Tasso to his court, whose son Torquato Tasso wrote off his Amadis here . Ingenious women also contributed greatly to the glorification of the court. Among them, Lucrezia d'Este stood out, who was married to Guidobaldo's son Francesco Maria (II) in 1570 - albeit against his will. It was through them that Tasso had been drawn to this court, which, like Ferrara, was considered a center of literary and poetic life in Italy.

Domestically, Guidobaldo's relations were particularly strained with the population of the old capital of his duchy, Urbino. The Urbinates had already disapproved of the transfer of the residence to Pesaro under his father, as it had forfeited important privileges. In addition, Guidobaldo had to raise taxes significantly to finance his expensive household. So the Urbinates revolted against him. Through the mediation of Pope Gregory XIII. the dispute was settled in 1573 in favor of the duke. Guidobaldo responded with executions and expropriations of his opponents in order to keep the reins of government firmly in his hands again. Without having achieved a reconciliation with the Urbinates, Guidobaldo died on September 28, 1574 at the age of 60 in Pesaro.

Guidobaldo and his second wife Vittoria Farnese were married to three children: