Alessandro Farnese came from an old knightly family of the Papal States ; the Farnese belonged to the papal nobility and had earned reputation, money, goods and fiefs in Latium through their service in the war and the military as condottieri .

After his father's death in 1487, his eldest brother Angelo inherited the property and the property together with Alessandro. On May 11, 1488 he married Lella Orsini , with whom he had only female descendants. His daughter Francesca Farnese married Guido Sforza, second Count of Santa Fiora. Angelo died of the plague in May 1494, so that his youngest brother Bartolomeo became Count of Montalto and Canino instead of his brother. He was married to Iolanda Monaldeschi, with whom he had the son Pedro Bertodolo Farnese and the daughters Isabella and Cecilia. Bartolomeo was the founder of the Duchy of Latera , which existed until 1668.

His sister Girolama married Puccio Pucci on November 10, 1483. From her second marriage to Count Giuliano dell'Anguillara and Stabiae, which had been concluded on February 15, 1495, came the daughter Isabella (Elisabeth) della Anguillara, who later married Galeazzo Farnese, the grandson of Bartolomeos, and with him the daughters Violante Farnese and Giulia Farnese had. On November 1, 1505, Girolama was murdered by her stepson Giovanni Battista dell'Anguillara in the castle of Stabiae .

Beatrice was a nun of a Benedictine monastery from 1490 and died in 1507 as abbess of the San Bernardino monastery in Viterbo .

Giulia was married twice and was the mistress of Pope Alexander VI. from 1489 to 1500. Their daughter Laura Orsini was born in 1492 and was probably the child of Rodrigo Borgias. From his marriage to Orsino Orsini on May 21, 1489 and his marriage to Giovanni Capece Bozzato in 1507, no further descendants of Giulia are known.

Career in the clergy

Cardinal Alessandro Farnese before his election as Pope Paul III. (by Raphael around 1512)

As the second-born son, Alessandro's path to an ecclesiastical office was mapped out. From 1486 to 1489 he received an excellent humanistic education in Florence. His family bought him an office at the curia, as entry into the church career was difficult due to the lack of influential relationships. Since he accused his mother of several offenses in 1487 and even had her imprisoned for it, he was held for some time in the Castel Sant'Angelo on the orders of Pope Innocent VIII.

After an initial phase as a relatively modest curia official, Alessandro became Apostolic Protonotary in Rome under Pope Innocent VIII . Pope Alexander VI , who had a relationship with Alessandro Farnese's sister Giulia, created him due to the influence of Giulia in 1493 cardinal and appointed him general treasurer of the Roman Church. In 1499 he was appointed bishop of Corneto - Montefiascone by Pope Alexander VI. Pope Julius II appointed him Bishop of Parma in 1509 . However, Alessandro Farnese was only ordained a priest and bishop in 1519. Under Pope Clement VII he became Cardinal Bishop of Ostia .

Coat of arms of Paul III. in the manuscript of the constitutions of the Cappella Sistina, which Ludovico Magnasco had compiled for the Pope (around 1543)

In the two conclaves that were used to elect Leo X and Hadrian VI. led, he was just inferior in the vote of the cardinals. On October 13, 1534, the conclave elected him unanimously on the second day of the conclave as the new pope; one of the shortest conclave of modern times, together with those of Gregory XIII. and Pius XII. The Pope's name presumably relates directly to the Apostle Paul .

“Cleverness and self-control, attentive restraint, deliberate, calculating hesitation with basically great willpower and energy were excellent qualities of Paul III, who was amazingly in control of his violent temperament. With lively interest, which was expressed in a highly significant mine game [sic!], He listened to those who submitted their opinion to him, and as an excellently trained diplomat he knew how to research their most secret plans and views. " 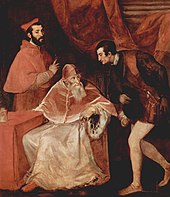 Pope Paul III and his nephews , painting by Titian

As Pope, Paul III was a classic representative of nepotism , on December 18, 1534 he appointed two of his grandchildren, Guido Ascanio Sforza and Alessandro Farnese (the younger), cardinals, and he also provided the House of Farnese with many and rich perks. For his son Pier Luigi he created the Duchy of Parma in 1545 from areas of the Duchy of Milan , which remained in the possession of the Farnese until it died out in 1731. Paul III, a believer in astrology , shared his daily calendar and his audiences . according to the state of the stars.

During his pontificate Paul III tried. in view of the spread of Protestantism , a renewal of the Church. He set up a reform commission made up of cardinals, which included the two later popes Paul IV and Marcellus II .

On December 17, 1537, Paul III. the English King Henry VIII because of his divorce with the excommunication and all of England with the interdict . With his bull Regimini militantis ecclesiae on September 27, 1540 he confirmed the statutes of the Society of Jesus founded by Ignatius of Loyola .

In 1545 he opened the Council of Trent , which, with a very long delay, was supposed to be a response to the Reformation initiated by Martin Luther . Due to great tensions with the Spanish King and Roman-German Emperor Charles V , he temporarily moved the council to Bologna . At that time Bologna was not part of the Holy Roman Empire of the German Nation like the bishopric of Trento and was therefore beyond the direct influence of the emperor.

As a secular prince of the Papal States , Paul III. always focused on neutrality . Nevertheless, in 1537 he concluded an alliance against the Turks with the Republic of Venice . A short time later, Emperor Charles V and Ferdinand of Austria also joined this alliance ( Turkish Wars ).

In 1548 Paul III called the Swiss Guard came back to life after the bodyguard of the Popes was disbanded as a result of the Sacco di Roma and the Peace of Barcelona . Paul III continued the construction of St. Peter's Basilica by appointing Michelangelo as the builder. 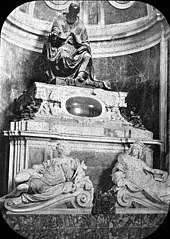 The tomb of Pope Paul III. was created by Guglielmo della Porta from 1555 to 1575 and is located in St. Peter's Basilica in the niche next to Bernini's Kathedra Petri .