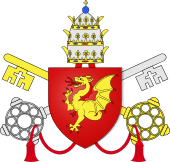 Gregory XIII. entered the service of the Church in 1539. In 1558 he became bishop of Vieste and in 1565 cardinal . On May 13, 1572, he was elected Pope in less than 24 hours in the conclave. The Pope name was already 150 years of disuse, he chose because it on the feast day of St. Gregory I . had been promoted to cardinal. Gregory XIII. promoted science and education , reformed the calendar , endeavored to regain lost territories of the Papal States and was one of the central figures of the Counter Reformation . Bartholomew's Night in France , which he expressly welcomed , falls under his pontificate .

On the first anniversary of the Ottoman defeat on October 7, 1571 in the naval battle of Lepanto , he founded the Rosary Festival in 1572 .

In order to put his scientific advisory staff for a calendar reform in a position to prepare and review the reform, he had a tower for astronomical observations built ( Tower of the Winds ) in 1578 and thus founded the Vatican Observatory, which still exists today .

He is best known today because of the calendar reform that went back to him , which, according to today's dating, he passed on February 24, 1582 with his bull Inter gravissimas and which is still valid today as the Gregorian calendar .

The main aim was to ensure that the measured year really corresponded to the astronomical year. The equinox of spring, day and night (primary equinox ) was to fall again on March 21, as had been established by the Council of Nicaea in 325. Until 1582, the " Julian calendar " (named after Julius Caesar ) was in effect , which was eleven minutes and fourteen seconds too long compared to the real length of the year. Every 128 years these constant small mistakes added up to a full day.

Gregor now decreed that the four-year period of the leap years should be modified: the years with which a century ended (years like 1300, 1400 or 1500) should only include those leap years that can be divided by 400 (Years like 1600, 2000, 2400 and so on). This means that 400 years in the Gregorian calendar are three days shorter than in Julian.

The extra ten days've been accrued since the Council of Nicaea, let Gregor remove from the calendar, so on Thursday, October 4, 1582 immediately Friday, October 15 followed (October 5 jul. / October 15 1582 greg. ).

In 1551, Ignatius von Loyola , the founder of the Jesuit order , established the first Jesuit school, called the Collegio Romano . This college enjoyed great popularity and was founded in 1584 by Pope Gregory XIII. Newly opened elsewhere in the city and specially promoted. In his honor was the Collegio Romano in 1873 by Pope Pius IX. the title Pontificia Universitas Gregoriana (Pontifical Gregorian University) bestowed.

Gregory XIII. had - from his pre-papal times - an illegitimate son: Giacomo Boncompagni , who was legitimized on August 26, 1572 (see Boncompagni-Ludovisi ). A nephew of Gregory is Ulisse Aldrovandi (1522–1605).

At the opening ceremony of the Holy Year 1575 in St. Peter's Basilica at Christmas 1574, the Hereditary Prince of the United Duchies, Karl Friedrich von Jülich-Kleve-Berg, was one of the guests of honor of Pope Gregory XIII. He was very interested in his guest, because he hoped that the young Hereditary Prince would later influence his countries, which were divided on the question of faith, as well as the neighboring Protestant areas in the spirit of the Counter-Reformation aimed at by the Holy See. Therefore, a week later, he awarded him the consecrated sword and hat, an honor as a Fidei defensor that was otherwise only given to kings. When Karl Friedrich died just five weeks later, Gregor XIII paid. the princely burial and the enormous funeral procession from its own coffers and left it in the Roman church of the German nation, Santa Maria dell'Anima , across from Pope Hadrian VI. to bury. He received a splendid honorary grave based on the design of his tutor Pighius, made by the sculptors Nicolas Mostaert and Gillis van den Vliete, which shows, among other things, a resurrection scene that refers to an intensive discussion with the Laocoon group found in 1506 . The second part of the tomb, a relief with the scene of the awarding of the consecrated sword by Gregory XIII, hangs today in the anteroom of the church.