As a leap year ( Latin annus intercalarius or annus bissextus ) in which is calendar statement one year referred to, which in contrast to the common year an additional leap day or leap month contains.

The Julian calendar , which was common until 1582, inserts a leap day exactly every four years. Then February has 29 instead of 28 days and the year 366 instead of 365 days. In the Gregorian calendar , three of these leap days are omitted in 400 years. As a result, the calendar year is on average better adapted to the sunny year ( tropical year ) that determines the seasons (up to just under half a minute).

In a lunar calendar ( bound lunar calendar ) adapted to the solar year - as in the religious Jewish calendar - a 13th lunar month (leap month) is occasionally added to the lunar year.

The inclusion of an additional day or month is also known as intercalation . Epagomene are a special form of leap days .

What is switched on?

When a leap month , a leap day or a leap second is mentioned, this usually means precisely this period of time ( month, day, second ) that is added. If, on the other hand, a leap year is mentioned, this does not mean an additional year , but just a year that differs from a common year in terms of additional (leap) days or (leap) months .

In contrast to a lunar calendar, a solar calendar is based on the course of the sun. The tropical year determined by this has a length of 365.24219 days (approx. 365 days, 5 hours, 48 ​​minutes and 45 seconds). The solar calendars described below come more or less close to this value with the help of switches.

Under Julius Caesar , the previous Roman calendar was thoroughly reformed (→ Calendar reform of Julius Caesar ). This began with the so-called " Confused Year " from 47 to 45 BC. BC, in which the difference that had accumulated over the years between the calendar dates and the sun positions originally assigned to them should be compensated for. From the year 45 BC Then the Julian calendar was used. Caesar (or his astronomer Sosigenes from Alexandria ) resorted to the same solution that Pharaoh Ptolemy III. 238 BC In the Canopus Decree for the ancient Egyptian calendar: every four years an additional leap day should be added in February. Why in February? Explanation: In the Roman calendar there was the leap month Mercedonius or Mensis intercalaris , which was always inserted at the end of the year according to a complicated and sometimes arbitrary rhythm. Since the Roman year ended in February ( February ), the leap month was added in February, after the Terminalia festivities on February 23rd and before the Regifugium festival on February 24th. This insertion date was retained even after in 153 BC. The beginning of the year was brought forward to January ( Januarius ). Although the February month was no longer the last month of the year, the Mercedonius was still inserted in the February month. In the new Julian calendar, which now required a leap day instead of a leap month, “the day following February 23” was kept as the insertion date. February 24th was the ante diem sextum kalendas martias , literally the “sixth day before the calendars of March”. (Since the counting was inclusive , it was the fifth day before the calendars of March.) This was preceded by a second February 24th ( ante diem to sextum kalendas martias , which means "second sixth day before the calendars of March") as a leap day. In the end, this insertion date was also adopted in the Gregorian calendar, but lost its importance due to the simple numbering up to 29 . At the Christian festival for St. Matthias you can still see the old Roman regulation: in common years it takes place on February 24th, in leap years on February 25th.

In 1582, the spring equinox took place on March 11 according to the Julian calendar. The day of the beginning of spring, however, was set for March 21 ( first Council of Nicaea in 325). The accumulated difference was therefore 10 days. By order of Pope Gregory XIII. ten calendar days were left out in 1582 (October 4th was followed by October 15th, whereby the sequence of the days of the week was not changed: a Thursday was followed by a Friday). The Julian four-year leap day rule has been added to ensure that there is no (or no significant) divergence between the solar year and the calendar year. The Gregorian leap day rule consists of the following three individual rules: 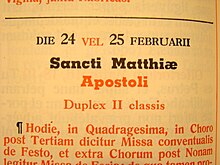 Since in reality the tropical year does not have an exactly constant length, the above-mentioned Difference between tropical and Gregorian year not constant. If one takes into account the current shortening of the tropical year by 0.5 s per century, the result is a difference that is increasing at the same rate and, as a result, a significantly earlier best point in time for the failure of a leap day. Assuming that this shortening has been constant since 1582 and until further notice, a leap day would have to be canceled in 4324. Until then, the accumulated difference would be 23 hours, 59 minutes and 43.968 seconds. So there is a remaining error of 16.032 seconds.

Even after the introduction of the Gregorian calendar, it was still customary for a while, as in the Julian calendar, to double February 24 in a leap year (see Roman Missal , picture opposite). When counting the church days in the Catholic Church, this practice was still valid until 2001. Only since then has the numbering of the calendar days been used as a basis in the editions of the Martyrologium Romanum and consequently February 29th has been used.

In the French revolutionary calendar, there was also a leap year every four years. One started with the years 3, 7 and 11 of the new year counting. In the year 15 the calendar was no longer in use.

This section needs to be revised: Here the word “leap months” is used in the sense that these are shorter months, but which occur every year. So nothing is actually switched here. Furthermore, the word “leap days” or “dead days” is more likely to mean epagomene .
Please help to improve it , and then remove this flag.
→ Main article : Lunar calendar

Leap months are required in lunar calendars to conform to the moon's synodic period of 29.530589 days. A regular change from “full months” to 30 days and leap months (“hollow month”) to 29 days is recommended. The missing 0.0306 days per month ( Metonic cycle , Kallippian cycle and others) are corrected with special rules .

There are also leap days to supplement the lunar year with twelve lunar months of around 354 days by switching on mostly eleven “dead days”, the time between the years , on a non- intercalating lunar calendar.

In the Islamic calendar, a synodic, i.e. pure lunar calendar, the determination of a leap year is defined as follows: According to a common system, all years that are divided by 30 are a remainder of 2, 5, 7, 10, 13, 16, 18 , 21, 24, 26 or 29 have leap years. All odd-numbered months have 30 days and all even-numbered months have 29 days. In leap years, a day is added to the twelfth month so that it then has 30 days. Thus, a year of the Islamic calendar consists on average of 354.36667 days. Astronomically, 12 lunations last 354.367068 days. The Islamic lunar year is therefore too short by 34.6752 seconds. Nevertheless, a good approximation has been achieved with regard to the phases of the moon: Only after 2,492 Islamic calendar years (i.e. after 29,904 lunations, or around 2,418 solar years) would an additional leap day have to be inserted in order to bring the calendar back into harmony with the moon phase. Compared to the solar year, however, the Islamic year is too short by 10.876 days. That is why the Islamic beginning of the year moves backwards through all the seasons every 34 years.

In the Roman calendar there were leap years that contained a leap month - a so-called mensis intercalaris .

The Jewish calendar is a lunisolar calendar or a bound lunar calendar . Its link to the solar year is made with the help of the Meton cycle . The calendar year consists of 12 lunar months with a total of 353, 354 or 355 days or of 13 lunar months with a total of 383, 384 or 385 days. The fluctuations by one day are determined by religious customs, they have no astronomical cause. In all years with a remainder of 0, 3, 6, 8, 11, 14 or 17 when divided by 19, a leap month with 30 days is inserted before the month Adar . This is then called Adar aleph or Adar rischon (first Adar), the “normal” Adar becomes Adar beth or Adarscheni (second Adar). All celebrations only take place in the Adar beth.

This is an analogy to the leap day in the Julian and Gregorian calendars, which originally doubled February 24 in the leap year. The doubling can no longer be seen, since for the sake of simplicity, counting continues in the usual rhythm. Today February 29 is inserted as a leap day.

The long-term mean from the six different year lengths is 365.2468 days. The course of the sun is reproduced with a smaller error than in the Julian calendar. The deviation is one day in about 219 years (Julian: in about 128 years).

The Chinese calendar consists of a combination of a solar and a lunisolar calendar. A leap year in the lunisolar calendar has 13 months with 383, 384 or 385 days instead of the twelve in the common year with 353, 354 or 355 days.

The leap years (ergo months) do not follow a simple rhythm. To calculate it, count the number of new moons between the eleventh month of a year (the month of the winter solstice ) and the eleventh month of the following year. If there are 13 new moons during this period, a leap month is inserted. The first month that does not contain any of the 12 central divisions of the solar year (zhong qì) receives the same number as the previous month with an addition as a leap month. For example, if the leap month follows the second month (二月), then it is simply called “switched second month” ( Chinese  閏 二月  /  闰 二月 , pinyin rùn'èryuè ).

These are "leap" days that are inserted every year.

The in ancient common Egyptian administrative calendar also changes year calendar lasted known, used years, the regular 365 days. 360 days of which were divided into 12 months of 30 days each. The “missing” five days were added every year as Heriu-renpet . In 238 BC BC Ptolemy III ordered . suggest adding an additional leap day every four years to prevent the seasons from shifting .

The Haab cycle of the Maya calendar consisted of 18 periods ("months") of 20 days each, which makes 360 days. In addition, every year there was a 19th “leap” month ( Uayeb “nameless”) consisting of five days, which resulted in a year length of 365 days.