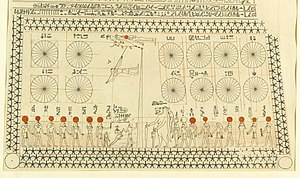 The Egyptian calendar was a calendar that was based on the natural event of the Nile flood and linked observations of astronomy with it. Different shapes emerged over time.

Development of the Egyptian calendar

The beginning of the year on the Egyptian calendar has always been aligned with the onset of the Nile inundation. The flood of the Nile is predictable and always occurs at the same time of year; the beginning and end can be postponed by a few days. The decisive factor is the amount of water, which has a major impact on agriculture . The Nile level rose near Aswan from June and reached its peak in August, the tidal wave reached the Nile delta about two weeks later. Herodotus reports that the flood of the Nile began at the time of the summer solstice - that was in his time in the 5th century BC. Around the 22./23. June. The season of the flood was called Achet in the Egyptian calendar .

The beginning of the annual flood period was closely related to the first appearance of Sirius (Egypt. Sopdet ) in the morning sky. Around 3000 BC The visible rise of Sirius in Aswan took place on 10/11. June and in Fajum on 17./18. June. However, the time of this ascent slowly shifted over time to the beginning of July.

To use the Sirius for a calendar, the difference to a solar calendar was first calculated on the basis of a 365-day calendar year (without leap days). Through long-term observation , a period of 1460 years could be determined. This period is known as the Sothis cycle (1424 and 1460 years). An administrative calendar was introduced which referred to Sirius as the " changing year calendar ". The calendar reform of Ptolemy III. in 237 BC BC (→ Canopus Decree ) brought about the introduction of a leap day , which was inserted every four years as the sixth Heriu-renpet day in addition to the normal year. With the death of Ptolemy III. the leap year rule ended in the official administrative calendar.

The two Egyptian calendar forms continued to be used in parallel in the following period. It was to be reserved for Augustus to become the first Roman emperor in 26 BC. The calendar form of Ptolemy III. to be reintroduced based on the Julian calendar .

Before the introduction of the Egyptian administrative calendar , on which the Egyptian civil lunar calendar was based, the Egyptians based themselves on the Sothis year , which with an average of 365.250015 days corresponded roughly to the Julian calendar. The seasons of Sothisjahres shifted compared against the actual solar year on average about every 126 years by one day.

The Nile flood reached up to the construction of the Aswan High Dam in 1902 has always been about the time of the summer solstice (June 19 to 23) the Nile Delta; in Elephantine / Aswan even at the beginning of June. The most published equation of the onset of the Nile flood around July 19 is taken from older publications and contradicts the actual circumstances. The New Year's Day of the Egyptians, often referred to as July 19, goes back to the publications of Eduard Meyer and Censorinus , which recorded the heliacal rising of Sirius on 19/20 in AD 139. July in the Nile Delta as the basis. Meyer put July 19 as a fixed date in the proleptic calendar, which he in turn used for his chronology of ancient Egypt.

The assumption of Censorinus that “the great year” of the Egyptians was linked to July 19, has been refuted by additionally determined astronomical data. Nevertheless, even today, most of the statements made by ancient historians on the calculation of the Sothis cycle and New Year's Day are mentioned. Among other things, the Egyptologist Rolf Krauss pointed out the old publication practice: “The fairy tale of a Sothis cycle of 1,460 Julian years with the day of rising July 19, which has been constant since ancient times, has been proven to be an arbitrarily created false construction”. Due to its own movement , Sirius had wandered more than a month in the course of Egyptian history to July 19 in the year 139 AD and had its heliacal rise in that year one month after the onset of the Nile flood.

With New Year's Day, the Egyptian calendar was tied to the flood of the Nile in Lower or Upper Egypt . The possible periods for the introduction of the calendar come from 4213 to 4186 BC. For Elephantine and 2783 to 2764 BC. For Memphis under consideration. As an additional criterion, the seventy days of non-visibility of Sirius must be taken into account, which was chosen as the period for mummification in ancient Egypt . For the observation site Elephantine this circumstance only occurred in the period from 4280 to 4160 BC. While with Memphis as a reference point the necessary duration was only given from the New Kingdom onwards. Ancient Egyptian texts show that the seventy-day invisibility was known before the 18th dynasty , which is why Memphis cannot be used as a source of supply.

Ludwig Borchardt already considered Upper Egypt as an observation site, but without making any calculations about the seventy days of invisibility of Sirius. Traditional reasons speak in favor of Upper Egypt and the associated prehistoric cult centers, especially since the unification of the empire began in Upper Egypt. At least two reasons speak against the coupling of the unification of the empire and the introduction of the Egyptian calendar: Although 1st Thoth fell on August 29, it was at the beginning of the last month of the flood of the Nile. In addition, the duration of the invisibility of Sirius in southern Upper Egypt was 65 days and in Lower Egypt 78 days. Elephantine has always been the southernmost point in Upper Egypt, which is why the Nile flood and the heliacal rise were observed there first. In addition, there are mythological reasons for Elephantine as a place that represented the geographical southern border of ancient Egypt.

In the Coptic liturgy , the religious festivals are based on the original ancient Egyptian calendar. Accordingly, the lunar months of the Egyptian lunar calendar are still assigned to the respective season. The classification is based on the actual flood of the Nile , which began on the southern border of Egypt around June 5 and reached Alexandria after a fortnight .

The New Year in the Coptic church year begins, following the early form of the ancient Egyptian calendar, with the 1st Payni , which in the Canopus Decree was also connected as New Year's Day with the heliacal rise of Sirius. The fourth month of the Peret period , which is considered the first harvest month in modern times, has a special position , whereby the harvest period has been extended to five months.

In addition to the Sothis lunar calendar , with the introduction of the civil Egyptian calendar, the new civil lunar calendar was designed and adapted to the administrative calendar . The civil administrative year was divided into 12 months with 30 days each  . The months, in turn, were divided into three “big weeks ” with ten days each or six “small weeks” with five days each. The epagomens (additional days) followed as an annual extension after the twelve main months. The total number of days in the Egyptian administrative calendar was 365 days and formed a so-called common year .

Alan Gardiner as well as Richard-Anthony Parker suspect that the form of the year changed in the course of the calendar history, which is why the beginning of the year was no longer based on the Nile flood, at the latest from the New Kingdom , but based on the heliacal rise of Sirius. At the beginning of the 19th dynasty , the "emergence of Sopdet (Sirius)" dated on July 5th, which at that time fell on the first day of the first month of Achet.

Changes to the calendar

The Julian calendar began in 46 BC. From the Roman calendar , the 154 BC. Planned and 153 BC. Was introduced. In 45 BC The astronomical beginning of spring in the Julian calendar was on March 22nd and, taking into account the corrected two days, corresponds to March 20th in the Gregorian calendar.

Instead of the since 45 BC In the four-year interval in the Julian calendar, the leap days were erroneously made every three years , which led to the fact that the heliacal rising of Sirius was postponed from July 18 to July 17 at the time of Augustus' change. In the Egyptian calendar, a leap day was first introduced in 26 BC. Possible because the astronomical constellation is an advance from Sirius to the 25th Epiphi in 25 BC. In the ancient Egyptian calendar.

Therefore Augustus still led in the year 26 BC The leap year in the ancient Egyptian calendar. The sixth Epagomenen day prevented the shift to the 25th Epiphi. In addition to the 42 day difference July 18 to August 29 as the Egyptian New Year's Day revealed. Augustus corrected the faulty switching by means of non-switching years, which is why the heliacal rise of Sirius initially shifted back to July 18 in the Julian calendar, before Sirius advanced to July 19 in the Julian calendar by 139 AD in Memphis because of his own movement .

The Islamic calendar could not establish itself in Egypt. Rather, the Coptic Calendar was used because it proved to be particularly practical for agriculture.

Technology and dates of the Egyptian calendar

Length of the tropical year according to various definitions

With the exception of four days under Ptolemy III, the Egyptian calendar had no leap days. Due to the faster earth rotation at that time , the value in 139 AD for the mean solar year was 365.2423 days. Middle of the 2nd millennium BC The duration of the mean solar year was 365.2424 days. With the calculation: 1 divided by (365.24235 days minus 365 days) you get 4.1263 years. In Egyptian practice this meant that every 4.1263 years there was a difference of one day in the Egyptian calendar. Multiplied by the Egyptian year length of 365 days, this gives a period of 1506 years, which, however, deviates from the Sothis cycle (1460 years).

To enable a direct comparison with the Gregorian calendar, the adjustment to the Julian calendar year of introduction 46 BC must be made. Be made. In 85 AD the deviation from the mean solar year was one day and the heliacal rising of Sirius took place on the 22nd Mesori of the Egyptian calendar.

The difference in the period from 46 BC. BC to AD 139 is 184 years in which Sirius wandered 46.25 days to rise heliacally on the 1st Thoth in AD 139. In conversion this means that Sirius was last seen on 19th Epiphi 46 BC. BC and 45 BC BC first rose heliacally at dawn on the 20th of Epiphi. The 20th Epiphi represented in the Julian calendar in the year 45 BC. July 18th (reference place Memphis), which corresponds to July 16th in the Gregorian calendar.

The Egyptian and Gregorian calendars coincided in the years 39 to 36 BC. Since the 22nd Epiphi is to be equated with the 16th July. Adding the 1506 years (without taking into account the leap days by Ptolemy III), the last agreement was found in the years 1545 to 1542 BC. Instead of.

In conversion to the Egyptian calendar and the 1st Thoth, which falls on the summer solstice (June 22nd) as New Year's Day in direct dependence on the Nile flood, these conditions were in the years 1264 to 1261 BC. In the New Kingdom and 2771 to 2768 BC. In the early dynastic period .

The 1st Thoth fell in 1259 BC. On June 21st. The historic peace treaty between Egypt and Hatti was concluded in 1259 BC. On the 21st of Tybi. The determined daily difference of 140 days results in November 8th in the Gregorian calendar.

In the specialist literature, this historical day is usually given as November 21 in the proleptic calendar. The reason for the daily difference of 13 days is that the calendar deviation from the Gregorian calendar is not taken into account.

The Egyptian calendar and its main events