Vertical angles are angles measured in a perpendicular plane . In geodesy and astrometry , they describe in particular all angles related to the perpendicular direction .

If the zenith , the nadir and the horizon are selected as the starting point, the following four vertical angles can be defined:

Vertical angles are often given in astronomy in degrees or sexagesimally in degree- minutes - seconds (° ′ ″), while in geodesy gons are used. In the military and in ballistics , the " line " is also used as an angle unit (6400¯ = 360 °), because it makes distance measurement easier (the sine of 1¯ is almost exactly 0.001).

An elevation angle is the angle of a point over a reference surface (such as the horizon ). In astronomy, it is also known for short as altitude . In geodesy, however , height refers to the perpendicular distance from the reference surface.

The height measurements with dragonflies or pendulum-compensated instruments relate to the “mathematical horizon”, which is realized by the plumb line, ie without taking into account the actual appearance of the horizon (shaped e.g. by vegetation, buildings and mountains). In seafaring, the usual sextants were used to measure the heights of the sun or stars above the chimney , which is the apparent dividing line between sea and sky. The skin depth must then be subtracted from the measurement in order to obtain the elevation angle.

A depth angle is the angle of a point below the horizon.

The depth angle is sometimes referred to as the depression angle. It is to be distinguished from the angle of inclination, which describes the inclination of a device with respect to the perpendicular direction and can be both positive and negative.

The zenith angle or the zenith distance is the angle between a target point and the perpendicular direction . Formerly the zenith angle was also called the “vertical angle”, but this is avoided today due to the misunderstanding of the term.

Using zenith angles as opposed to elevation and depth angles has several advantages:

Nadir angles are mainly used in remote sensing and photogrammetry . The angle to the nadir for aerial photographs is ideally around 0 °, since deviations from the nadir that are too great cause image distortions and make the orthogonal recording unusable. For points close to the horizon, the nadir angle directed to the horizon is 90 °.

Vertical angle are used for the determination of heights , the geographic coordinates , for measurement of terrestrial objects and positions, and in astronomy to calibration of celestial bodies . 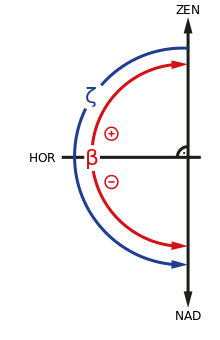 In geodesy , the use of vertical angles is limited to two, as they can be clearly determined for their starting position:

In geodesy, a depth angle is usually expressed by an elevation angle with a negative sign. The nadir angle is also replaced by the supplementary zenith angle.

Realization of the directional reference

The reference of the measuring device to the exact direction of plumb bob is created by a level or a plumbing sensor . The latter a liquid compensator in the optical path of the can riflescope be, or a small pendulum body in the reading optic . In technology and navigation , gyro platforms are also measured.

The most important instruments for vertical angle measurements are classified according to their measurement accuracy :

For accuracies higher than one arc minute , the measured vertical angle must be reduced by the influence of height index errors and refraction :