The dragonfly in a spirit level

In measurement technology, a slightly curved plastic or glass tube filled with a liquid and an air or gas bubble is referred to as a spirit level (Latin for small scales ) , which is used to check the horizontal or vertical position of objects, instrument axes or measuring lines . The most common application is the spirit level . In geodesy , dragonflies are used to precisely level the measuring instruments ( theodolites , tachymeters ).

There is evidence that the Frenchman Melchisédech Thévenot developed a small glass tube filled with liquid that contained an air bubble and was slightly curved. The principle of today's dragonfly was found - the foundation for easy alignment of objects was laid.

The device was mentioned as early as 1558 in the work L'histoire entière des poissons by Guillaume Rondelet , who suggested the name dragonfly for what is now known as the insect and compares it to a device used by architects. He compares the insect with the hammerhead shark (Italian libella ), which led to the name of the insect and the device. The design of the devices mentioned by Rondelet is unknown. It can be assumed that the name libella for the hammerhead shark goes back to the image of a scale. 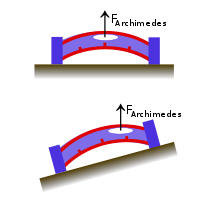 Working principle of the dragonfly

The cavity, in which there is liquid and a gas bubble, is slightly curved on the top with a defined radius , so that the gas bubble always floats at the highest point (12 o'clock position) due to its buoyancy. As a rule, there are two markings (rings made of burnished spring steel wire) in the transparent body, on the left and right of the central position. If the gas bubble lies exactly between the two markings and if the level is correctly adjusted, the object to be tested is in the horizontal or vertical position. The point at which the bubble then stands is called the normal point. The playing point of a dragonfly in connection with an axis is the point of the dragonfly at which the bubble is when the axis is vertical or horizontal. If the level is correctly adjusted, the normal point and the play point are identical.

The bubble is created during manufacture. Mostly ethanol or diethyl ether is used as the liquid and is poured hot up to the edge into the cavity of this glass body and directly melted shut. When the filling cools down, the gas in the filling contracts to form a bubble.

Two vial designs that are different tube level or Verkantlibelle for alignment in one dimension and circular level for two dimensions.

Two vials (on the right with suspension for assembly)

The tubular level is mostly used in relatively low quality for the construction of inexpensive spirit levels (see photo). Nevertheless, these are sufficiently precise for most cases of use. With a simple scale printed on it, a tube level can also be used for direct measurement of slopes .

The requirement is different if the tube vial is to be used for fine alignment of optical (geodetic) devices. The glass body is ground barrel-shaped and forms an even circular arc towards the top. The larger the radius, the more precise the tubular level is. The accuracy of a tubular level (level indication) also determines the accuracy of the measuring instruments, provided they are not equipped with a compensator . 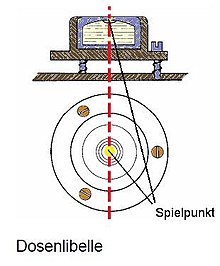 In addition to the spirit level, the tubular vial also appears in other designs:

Use of the tubular level

Most of the time, an optical device has three leveling or foot screws . Turn it so that the tubular vial is parallel to two of these screws, and let the vial bubble play in exactly the middle M by means of the leveling screws by only turning them against each other. Then the device is rotated 180 ° around the vertical axis and the level is checked: its bubble should be exactly in the middle. Now you turn the device by 90 °, i.e. the level is perpendicular to the two already set foot screws. Repeat the process by only adjusting the 3rd screw. Don't forget: turn around a semicircle again to check.

If the level was inserted and the bubble deviates from the center after turning it 180 ° (point D), the level or the optical device is misaligned . Precise measurement is still possible: you play the bubble exactly between D and M and check it by turning it back by 180 ° (the middle position DM is retained). Finally, this process is completed with the 3rd screw with the vial in a horizontal position (90 and 270 °). If the tubular level has two rectifying screws - and you have 5–10 minutes yourself - you can adjust it. The other half of DM is put away during the leveling process, i.e. the level is slightly tilted in relation to the device. Often a tenth of a turn is enough! The tubular level was used in geodesy primarily for leveling levels and theodolites. A distinction was made between leveling instruments of north German and south German construction. On the latter there is a tilt screw on the telescope to which a tubular level is attached.

Circular level on a photo tripod 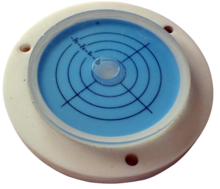 Circular level for aligning a crane truck (Ø can approx. 75 mm)

A vial is a tubular vial that can be placed on any surface . It is usually mounted on a smooth metal surface and can be set exactly parallel to it using an adjusting screw (transfer method).

Setting vials are used, among other things, to set up machines, high-precision components or to level reflecting plates ( artificial horizon ) for measuring elevation angles .

The spirit level, which is often used in everyday life and in construction, is in principle also a setting vial, but instead of an accuracy in the range of a few arc seconds it usually only provides about ± 0.1 degrees (1–2 mm at 1 meter).

The circular level is used for rough alignment in two dimensions , e.g. B. in the construction of the tripod of optical devices, and consists of a glass vessel which is ground spherically round at the top and has one or two marking circles above it in the middle. When leveling , bear in mind that both the level and the measuring instrument could be misaligned , therefore and for a higher accuracy one should turn the measuring instrument around the vertical axis and check whether the level bubble is moving. If she does, you can

The sensitivity of dragonflies, which is called an indication, is given as a pars value. This is the angle by which the dragonfly has to be tilted so that the bubble shifts by 2 mm (= 1 pars). The reference of the sensitivity specification to 1 pars is due to the fact that the individual lines of the line division have this spacing in the case of tubular vials. The previously common distance of 1  Parisian line (2.256 mm) was changed to 2 millimeters in the 20th century.

The sensitivity of the tube vial has a direct influence on the accuracy of the measuring instruments. Prior to the development of the compensator, leveling instruments, for example, were used to level the aiming beam solely with vials. The instruments could be classified based on the sensitivity of the dragonflies. With a level indication of 10 ″ ( angular seconds ) one spoke of a precision level , with 60 ″ of a construction level . The latter still use the dragonfly due to their low accuracy requirements.

The bubble length of the tubular vial depends on the temperature, which is why elongated, precise Horrebow or hanging vials have a compensation vessel. In the case of one-sided heating, a temperature gradient occurs in the liquid, which shifts the air bubble slightly to the warmer side. This import error is particularly important when performing fine geodetic measurements, for example by shading the dragonfly when the sun is shining.

Tubular spirit of theodolites usually have information from 10 up to 30 "and can be read to about 0.2 pars. They are about 5 to 10 times more sensitive than circular spirit bearing an indication of about 5 '( angular minutes have). But it is also more sensitive (1 ') and more sluggish circular levels (e.g. 0.5 ° for small nautical devices).

The most sensitive tube vials allow setting z. B. telescopes to better than 1 ", which corresponds to a measurement deviation of 4.8 mm at a distance of 1 km. Such vials are hardly needed when leveling geodetic devices, because a pendulum prism keeps the residual error small in the compensator level , and in the theodolite the mostly quite flat elevation angles limit the effect of the standing axis error on the direction.

For special applications there are rider vials , which are placed on the tilting axis or the alidade (par values ​​1–10 "). Today, they are partly unnecessary because inclination sensors (see below) also work more precisely than 1". There are hanging vials for large universal instruments such as the Wild T4 and measuring devices for astronomy . The Horrebow level is clamped to the rifle scope to guarantee a 0.1 "constant zenith distance .