The title of this article is ambiguous. Further meanings are listed under Scales (disambiguation) . 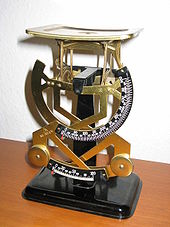 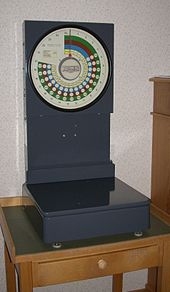 A scale is a measuring device for determining a mass . Usually this takes place via the weight force .

The weight force is either measured directly, such as with a spring balance , or it is compared with the weight force of a known mass. An example of this is the beam balance . In the case of scales of the first type, the measurement result depends on the severity , which differs locally, which is described by the “spatial factor”. In the case of balances of the second type, the gravity is the same for both masses compared and is therefore irrelevant for the result. In both types, the weight value is influenced by the static buoyancy in the air. Depending on the application and the required accuracy, these influences are neglected or taken into account through suitable measures.

A special form is the counting scale , which determines the number of many identical objects from the mass of one or more individual pieces.

Relationship between mass and gravitational acceleration 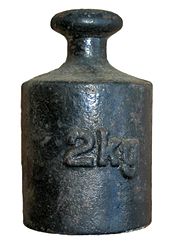 In this simplified equation the following are neglected (which is permissible depending on the required accuracy): 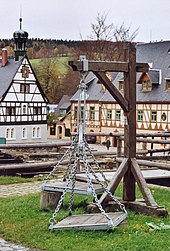 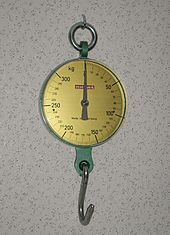 A balance beam from the 5th millennium BC Was discovered in a prehistoric tomb in Egypt . The earliest Egyptian images of simple beam scales date from around 2000 BC. The suspension of the balance beam consisted of a rope, at its outer ends the balance pans hung. Around 500 BC Etruscans improved the accuracy of the beam balance. The Romans also knew unequal-arm scales, the longer arm carried a movable weighing element and a line marking. In the Renaissance , highly sensitive analytical scales were used in alchemical laboratories.

In 1669 the Frenchman Gilles Personne de Roberval invented the table scales. It had the advantage that the position of the load to be weighed on the weighing pans did not affect the result. In 1763 the Swabian pastor Philipp Matthäus Hahn built an inclination scale with a direct weight display. Decimal and kitchen scales were created in the first half of the 19th century. Around 1850 attempts were made to automatically print the weighing result. In 1895, scales with simultaneous price displays appeared in the USA (price-calculating scales). In 1939, two American engineers introduced the age of electronic scales with the use of changes in electrical resistance.

In the case of mechanical scales, a distinction is made between the above two basic principles, weight measurement and mass comparison.

Weighing by measuring the weight

In the simplest form of spring scales, the object to be weighed is hung on a coil spring and the extension is measured. Based on the spring constant , the weight force is determined and mapped to the mass with the corresponding scale . Related measuring principles are also based on deformation measurement, for example with membranes , force sensors , load cells , piezo effect or ring torsion .

There are spring balances and force gauges for different measuring ranges . Examples: 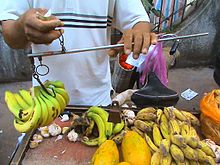 Quick scale made of aluminum in China . The user can change the leverage effect in two ways: firstly by moving the reference weight (right in the picture), secondly by choosing the retaining ring (left in the picture). 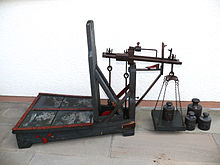 Decimal scale: The goods to be weighed are placed on the platform (left). Its weight is partly carried to the ground and partly transferred to the lever arm at two suspension points.

The mass of a body is determined by comparing it with standard weights. These scales also work with gravity , but do not have to be adjusted to the different local conditions and could therefore also be used on other celestial bodies, such as the moon. Usual reference weights start at 1 mg for pharmacy scales and end at 10 kg for market scales.

Today, mechanical devices are largely replaced by electronic scales. They are more robust, more accurate, easier to read and often cheaper. Electronic analytical balances often have a housing to protect against air movements, programs for calibration and special damping to prevent vibrations. They measure in the range of a few hundred grams (typically 200-300 g) with a readability of up to 0.1 mg, which corresponds to a resolution of 10 6 .

Measurement of a deformation

Electric scales work either by converting the weight force , which cannot be measured directly, into a deformation or a path. This is usually achieved by means of a spring or a bending beam , whereby the spring in a crane scale can be a relatively solid metal block.

The direct method measures the deformation of the spring / the bending beam using a strain gauge ; the indirect path measurement can e.g. B. be done via the change in capacitance of a capacitor when changing the plate spacing.

More accurate scales work on the principle of electromagnetic force compensation. A counterforce is generated by a coil in a permanent magnet , which corresponds to the load of the sample to be measured on the weighing pan. With this counterforce the balance is kept. This is done by a position sensor and a control amplifier, which are necessary to maintain the state of equilibrium. A lever system enables a larger force to be kept in equilibrium with a smaller counterforce. The coil current is measured as a voltage drop across a measuring resistor and processed and displayed by an analog-digital converter . With this principle, there is no significant deformation, which leads to a higher accuracy compared to deforming principles.

Electromechanical scales for industry and transport 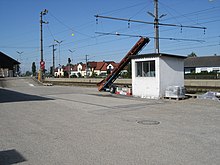 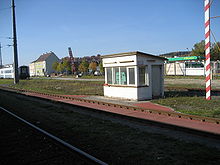 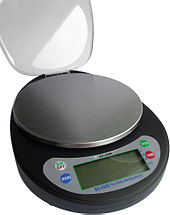 Scales with sensor elements that work with vibrating strings or with which capacitive or piezoresistive sensors are used are also less common .

Counting scales reverse the measuring principle of weight comparison by calculating the counting size from the ratio of the weight of a quantity of pieces to a single one of these pieces. In the case of large quantities, one also compares the weight of a larger quantity, around 100 pieces.

Special scales for technology and physics

Barrel weight scale for households, around 1935 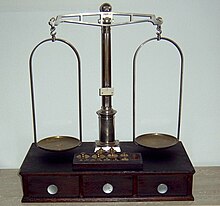 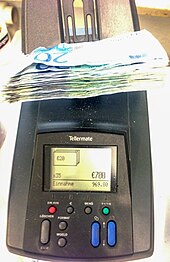 For people and the household:

Precision balances achieve accuracies of up to 0.01%. Classification according to accuracy:

The word scales ( ahd. Wāga , mhd. Wāge ) is related to the verb to move . Both words go back to an Indo-European root that means "to move". In the original sense of the word, a scale is a moving, vibrating object. The verb dare (mhd. To weigh ) with the meaning “dare to risk something” is a derivation from mhd. Wāge (= scales) and actually means “to put something on the scales”.

In 1927, the case was to better differentiate to cars of scales to balance changed.

The verbs weigh and weigh both mean “to determine the weight”, but differ in word history and in word usage today.

Determining the weight is almost exclusively expressed in common language today with the younger verb weigh . In the technical jargon, however, we have held out. In addition, weighing in Switzerland in use.

The verb weigh the same in the present tense (but weak: weighed, weighed ) with the meaning "gently move back and forth" is derived from cradle . The words cradle and scales are not directly related, but they probably go back to the same Indo-European word root with the common basic meaning "moving object".

The device was particularly popular in religious iconography in the image of the soul scales .

The word scales is also used in terms for some technical devices that are not used to determine weight:

In common parlance, some idioms make use of the image of the scales: