The title of this article is ambiguous. Further meanings are listed under wind tunnel (disambiguation) .

A wind tunnel is used to examine and measure the aerodynamic and aeroacoustic properties of objects. 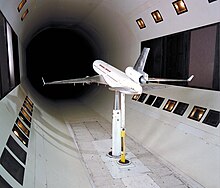 NASA wind tunnel with a model of an MD-11

The best known are probably the wind tunnel examinations of airplanes and cars . Investigations in the wind tunnel are used to investigate air resistance , dynamic lift or deformations due to aeroelasticity .

Models of structures such as high-rise buildings , chimneys and bridges are also examined in wind tunnels. With them, the aim is to assess whether they can withstand the expected wind forces in their original size during storms. In order to be able to simulate the wind flow correctly, the entire immediate environment sometimes has to be modeled. Only a few objects can be meaningfully examined in the wind tunnel without scaling. Cars are an exception because they are not too big and the relatively low air speeds allow sufficiently large wind tunnels. Scale models are used for aircraft or buildings . The shape of the flow around a body depends on its Reynolds number . In order to obtain realistic results, the investigation in the wind tunnel must be carried out with the same Reynolds number as it corresponds to the flow around the original. This can be achieved through a higher density of the medium or through a higher speed. 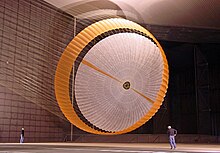 Parachute in a wind tunnel test

The air duct of wind tunnels can also be open or closed. With the open design, the air is sucked in from the environment, flows through the measuring section and escapes back into the open at the other end. Closed air ducts are ring-shaped. Here the air flow picked up by the collector after the measuring section is fed back to the fan . Low temperatures and high pressure can only be generated in closed wind tunnels ( climatic wind tunnel ). Wind tunnels for subsonic speeds can have a diameter of several meters, but the size of wind tunnels for the high supersonic range shrinks to a few centimeters.

Wind tunnel experiments are always associated with high costs, mainly because of the high investment costs involved in creating them. Therefore, attempts are increasingly being made today to replace the experiments with numerical flow simulation (CFD, computational fluid dynamics ). The phenomena are already represented quite well today. In reality, however, the vision of replacing wind tunnel experiments with numerical simulation is still a long way off. This is all the more true for aeroacoustic simulation (CAA, Computational Aeroacoustics ).

Wind tunnels can be classified according to their mode of operation as follows:

In 1905 and 1906 Gustave Eiffel carried out investigations on the flow resistance of rectangular and oval plates on the Eiffel Tower by letting them fall vertically downwards on a wire rope from the second platform of the tower. The force acting on the plate was recorded on a metal cylinder wrapped with sooty paper. In 1909 Gustave Eiffel built a laboratory with a wind tunnel on the Champ de Mars , which was moved to Auteuil in 1912 . The Laboratoire Aerodynamique Eiffel can still be visited there today. The wind tunnel consisted of a closed measuring cabin, from which the air was sucked out on one side with the help of an electric fan (the “70 HP” electricity for this was supplied by the power center of the Eiffel Tower). On the opposite side of the room, air flowed from a large storage room through a nozzle into the inside of the measuring section. In the air jet generated in this way, Eiffels employees later also carried out systematic investigations into the behavior of the first wing shapes for aircraft. This type of open channel, which is fed by outside air, is therefore also called the “Eiffel Canal”. An Eiffel canal has the disadvantage that temperature and pressure fluctuations as well as speed differences from the environment from which the air is sucked in continue into the measuring section, so that the flow can only be kept and adjusted laminar within certain limits. 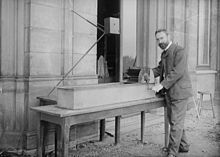 For this reason, among other things, Ludwig Prandtl developed a different form of the wind tunnel and implemented it for the first time in 1908 in the model research institute for aerodynamics he founded in Göttingen . In a wind tunnel of the Göttingen type, the air behind the measuring section is sucked off by a fan in a collecting funnel, from where it flows back to the nozzle in front of the measuring section via a duct. In this way, the physical properties of the air in the duct can be well controlled. You can z. B. bring the entire channel and the measuring section under increased pressure or cool. There are channels in which pressures up to 120 bar or temperatures down to −200 ° C are used. As a rule, a Göttingen-type duct is also more efficient , since the kinetic energy of the air flowing out of the measuring section is reused. Therefore, most wind tunnels with high power / jet speed have a closed circuit.

This construction method was inspired by an experimental channel that Prandtl used in Hanover to carry out investigations with flowing water. Instead of the fan, a water wheel was set in rotation by means of a hand crank in this approximately 2 m long and 20 cm wide canal, whereupon the water in the measuring section was sucked off and through a flow duct located below it back to the other side of the measuring section streamed. Obstacles could be inserted into the open channel from above and the flow around them could be observed.