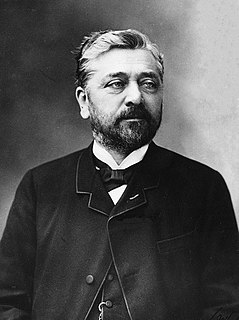 According to previous genealogical knowledge, Leo Heinrich Bönickhausen , who lived in the Eifel at the end of the 17th century, is Eiffel's German ancestor .

Eiffel grew up in his native Dijon. From 1843 he attended the Collège Sainte-Barbe in Paris , where he settled in 1850 and first studied at the local École polytechnique . Due to cumbersome admission requirements, he switched to studying chemistry at the École Centrale des Arts et Manufactures , which he graduated with a diploma in 1855. After he failed to join his uncle's factories, he worked for a few months in an explosives factory in Châtillon-sur-Seine . He then worked in various design offices until in 1856 he found a job as a bridge engineer at the West French company Compagnie des chemins de fer de l'Ouest , where he first started designing railway bridges . There he made the acquaintance of the steel construction entrepreneur Charles Nepveu in the same year . He recognized his talent and made him a project manager in railway bridge construction. At that time, there was a great demand for engineers in this division and, at the same time, high staff turnover . Eiffel showed perseverance, diplomatic knowledge of human nature and, above all, great organizational talent, always attracting and bringing together the most suitable specialists for his projects.

The Passerelle Eiffel around 1900

In 1858 he was appointed chief engineer in the construction of a 500-meter-long railway bridge over the Garonne in Bordeaux (later called Passerelle Eiffel ), which opened in July 1860 and is considered to be his first construction. Instead of designing the bridge as a solid wall girder as usual , Eiffel designed the superstructure as a light truss construction , which he also preferred in the future. This successfully completed demanding order established its good reputation in the industry.

In 1862 he married the Frenchwoman Marie Gaudelet, with whom he had five children, three girls and two boys. However, his wife died very early in 1877. He then married his cousin Chantall Letou. In 1866 he set up his own business in Levallois-Perret near Paris. Then in 1867 he was commissioned to build the viaducts of Rouzat-sur-la-Sioule and Neuvial on the Commentry-Gannat railway line in Auvergne . The first work for the world exhibition followed in the same year . From 1872 to 1874 Eiffel was active in South America , where he worked in Chile , Bolivia and Peru . Among other things, he built a bridge in Chile in 1872 and a gas factory in Bolivia in 1874. In 1875 he was responsible for the construction of the West Railway Station in Budapest , which was completed in 1877, and he was commissioned to build the Ponte Maria Pia in Porto (opening on November 4, 1877) and the Ponte Dom Luís I in Porto (October 31, 1881). In 1880 he was awarded the contract to build the Garabit Viaduct , which caused a sensation because of its height (122 meters) and its curved shape and which could only be opened in July 1888. In 1879 he began developing a sophisticated support system for the supporting structures of the inner support structure of the Statue of Liberty in New York designed by the French Frédéric-Auguste Bartholdi , which was inaugurated on October 28, 1886. Between 1881 and 1882 Eiffel built the bridge at Szeged in Hungary .

The Dictionnaire des Francs-Maçons Européens names Eiffel as a member of a lodge of the Grand Orient de France , but without specifying the lodge. It is true that the significant creative and financial participation of the Freemasons in the Statue of Liberty seems to confirm membership, but since the date of admission and the specific name of the lodge are not generally known, membership is considered controversial. 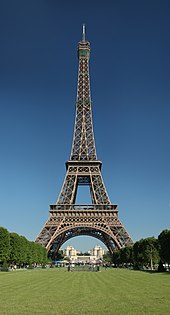 His most important project was preceded by a patent application dated September 18, 1884 "for a new process that allows the construction of metal pillars and pylons of a height that can exceed three hundred meters". It was the Eiffel Tower in Paris , named after him , which, since construction began on January 26, 1887, was completed in just 26 months on March 31, 1889, and opened on May 15, 1889. The design came from the architect Charles Léon Stephen Sauvestre based on a design idea by Maurice Koechlin . It was planned for the Paris World's Fair in 1889 and was built under Eiffel's direction. The tower, which was initially not accepted by the Parisian population, quickly became an internationally recognized symbol of Paris and France.

Even before the construction of the Eiffel Tower, Gustave applied for his family name to be changed to "Eiffel", which is unpronounceable for the French. On December 15, 1880, a court in Dijon ruled. In the meantime, at the end of 1887, Eiffel signed the most momentous contract of his career when he was to deliver 30 locks for the Panama Canal planned by Ferdinand de Lesseps , which had to be installed from January 1, 1888. After the Panama company went bankrupt in February 1889, Eiffel was found guilty of default in 1893. Thereupon he handed over his company Eiffel & Cie. to his colleague Maurice Koechlin and withdrew from the business. At the beginning of the 20th century, Eiffel did pioneering work in the field of wind tunnels with experiments to investigate the air resistance of various geometric shapes and thus laid the foundation for modern aircraft construction .

Gustave Eiffel died in 1923 at the age of 91 and was buried in the Levallois-Perret cemetery , northwest of Paris. 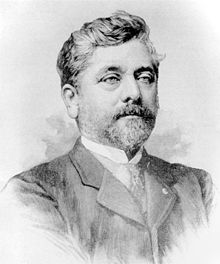 Gustave Eiffel's paternal ancestors were called “Bonickhausen-Eiffel” or “Bonickhausen dit Eiffel” (“ called Eiffel”). The German spelling of the name Bonickhausen is "Bönickhausen" with umlaut characters . The oldest traceable ancestor of the family Bönickhausen in France Jean René Bönickhausen that on April 30, 1711 in the house of the Duke of Gramont in the rue Neuve Saint-Augustin in the parish of St-Roch , Paris , married Marie Lideriz and as an employee of Ferme générale died on January 7, 1734 at the age of 75 in Saint-Valery-sur-Somme in Picardy . In his death entry there is the suffix "dit Eiffel" (called Eiffel).

The writer and Eiffel biographer François Poncetton and the former general director of the French archives, Charles Braibant advocated the assumption that the oldest ancestor in the French line, Jean René Bönickhausen, comes from the family of the Eifel schoolmaster Leo Heinrich Bönickhausen . At the end of the 17th century he lived in Aremberg , district of Ahrweiler , and in Marmagen , district of Euskirchen , and served there as ludimagister (schoolmaster) and sacristan in church services. Going back to Braibant, the explanation has spread that his son Wilhelm Heinrich, baptized in Marmagen in 1680, emigrated to France around 1710 and called himself Jean René Bönickhausen with the addition of Eiffel. However, this claim, which is often found in the Eiffel biographies at hand, has not been proven.

“Bonickhausen dit Eiffel” is also entered in Alexandre Gustave Eiffel's birth certificate. On the edge of the document, however, there is a note that by judgment of the first instance court of Dijon on December 15, 1880, the name “Eiffel” was to be substituted for “Bonickhausen dit Eiffel”. He applied for the abbreviation of the name to the Ministry of Justice on October 30, 1878, and gave detailed reasons. 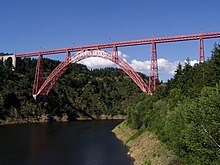