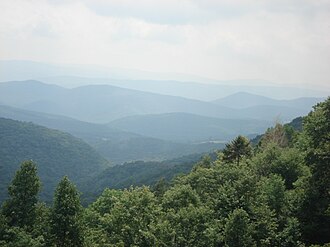 A low mountain range is a mass elevation of the earth's surface ( mountain range ) protruding from the plain by a height difference of 200 to 1000 meters with absolute heights that are usually between 500 and 1500 meters above sea level. In general, low mountain ranges are characterized by a relief with steep slopes and a number of elevations, which, however, in contrast to high mountain ranges, are mostly rounded and wide. The natural vegetation shows at least minor differences to the plain, which can usually be demarcated in at least one height level . If the aforementioned conditions are not met, it is a hill country , a rump area or a plateau .

The term low mountain range is used both in general terms and in geosciences , for example in geomorphology (landform science ), geology , soil science , cartography and climatology . However, there is no scientifically generally recognized definition due to the many deviations and peculiarities.

There are no common specifications for height and height difference; they are different (e.g. depending on the region). Some sources require only 200 m relief energy, others up to 500 m as a minimum and up to a maximum of 1000 m as a maximum. In contrast to high mountains, low mountain ranges usually only exceed the forest and tree line in the boreal and polar zones . In Central Europe, the border to the high mountains is around 1500 to 1800  m . This corresponds to the boundary between the montane and alpine altitude levels .

The Giant Mountains between Poland and the Czech Republic can be classified as a borderline case between high and low mountain ranges, it is over 1500 m high in several areas and there also has typical high mountain vegetation, but its surface forms are predominantly similar to those of low mountain ranges. High mountain vegetation can also be found on the highest mountains of the Ore Mountains and in the summit area of ​​the Brocken , the highest mountain in the Harz Mountains . The Black Forest , the Bavarian Forest and the Harz Mountains had their own glaciation and therefore have glacial shapes.

With a corresponding exposure of the low mountain ranges to the main wind direction, strong inclines can often be observed. In terms of temperatures, the mountain climate is often only slightly cooler than the plain.

The north of Central Europe's Montanzone is occupied by the low mountain range threshold up to 1602 m ( Schneekoppe ) . Beginning in the west with the Belgian-French Ardennes , it extends across central Germany, Poland and the Czech Republic to the Carpathian Mountains in south-eastern Poland and Slovakia . In addition to the Rhenish Slate Mountains , z. B. Harz , Rhön , Thuringian Forest , Fichtel Mountains in addition.

The Hungarian Central Mountains are an old volcanic remnant in the middle of the Pannonian Plain . Geologically, however, it is related to the thermal zone of the Alps and the subalpine volcanism of the Graz Basin (presumably marks a collision boundary between the Alps and the Rhodope plateau). It stretches from Lake Balaton to the north of Budapest and is the reason for the characteristic Hungarian Danube Bend . It separates the Great Pannonian Plain from the Small .

Layer level countries on both sides of the Upper Rhine Rift

To the south of the threshold, on both sides of the Upper Rhine Graben, up to 1493 m high stratiform lands are connected, which slope to the east and west. The southern German layered level land on the right bank of the Rhine extends south to the Alpine foothills and takes up large parts of Germany's south: In addition to the Black Forest , it also includes the Odenwald , Swabian and Franconian Alb . The French layered plain on the left bank of the Rhine, up to 1424 m high, with the Vosges, extends to the southwest as far as the Paris Basin and only occupies German soil in the extreme northeast ( Palatinate ).

The Jura in the canton of Solothurn

The Jura Mountains , which are up to 1720 m high, adjoin the stratiform countries to the south. It lies on the border between France and Switzerland, and east through the plateau separated from the Alps. In several regions it exceeds the tree line and already represents a borderline case to the high mountains. As a fold mountains , the Jura was created at the same time as the Alps, in the direction of which the eaves of the main ridge are oriented. Ultimately, the Jura shows more references to the Alps and Prealps than to the other Central European low mountain ranges.

While the foothills around the Alps ( pre-Alps ) are seen directly as their subgroups, there are some low mountain ranges that - for various reasons - are not included in the Alps:

Conversely, the Karst , the foreland of the Dinarides , is geologically part of the complex of the Southern Eastern Alps . Despite its orographic independence, the plateau is only remotely characterized by low mountain ranges.

At up to 1886 m, the Massif Central , which is centrally located between the Alps and the Pyrenees in southern France, is even higher than the Jura . Despite its height, the massif does not exceed the tree line because of its location near the Mediterranean, which is favorable for a milder climate. Thus, the massive Central Massif, which is very extensive in terms of area, clearly represents a low mountain range, but is already outside the temperate zone of Central Europe.

Terrain in the northern Apennines. In the background a striking rock formation, the Pietra di Bismantova .

The central chain of the Italian peninsula, the Apennines , is largely a low mountain range along its entire length, from the transition to the sea ​​Alps to the transition to Sicily , but in the central section in the Abruzzo ( Gran Sasso massif 2912 m) it also has a mountainous character .

All mountains in Germany with the exception of the Alps and the Alpine foothills are low mountain ranges . More than half of them belong to the German low mountain range . Another, not inconsiderable part in the south is the southern German layer level country , while only the (western) Palatinate is included in the northern French layer level country .

Mountains formed in the course of the earth's history ; from then on they were subject to long-term developments (e.g. erosion). The rocks of the Central German Uplands, along with the Caledonian mountains and the equally Variscan Ural mountains the oldest in Europe . Their current appearance has changed completely over the course of millions of years, different phases of uplift and subsidence alternated, the low mountain ranges that can be found on the surface today (except for the strata) represent vertically and horizontally the remains of the Variscan mountains, which are mostly located under the sedimentary layers (overburden ) Europe continue.

From the Carboniferous , around 350 million years ago, the Variscan mountains formed in Central Europe through the collision of several continental plates and the subduction of oceanic crust. Already during the formation, the erosion of the mountains began as an exogenous influence; even in the Permian , larger basin structures had emerged within the former mountains.

During the Triassic period , which began around 225 million years ago, what is now Central Europe was temporarily above and sometimes below sea level (see also transgression and regression ). Therefore, different sediment layers can be found in the German low mountain ranges today : mostly colored sandstone alternates as terrestrial and Keuper and shell limestone as marine sediment layers. Lime was deposited in particular during the Jura and mainly chalk in the Cretaceous period .

In the Tertiary there was the Alpid mountain formation , whereby strong forces acted on the hulls of the Variscan mountains. Since the rocks were already folded, further tensions led to an elevation as well as cracks and fractures, which in turn led to fracture clods . These broken clods were partially pushed under and therefore raised ( Horst clod , e.g. Harz , Upper Palatinate Forest ), a lowering ( rift valley , e.g. Upper Rhine Graben ) or pushed one above the other ( Pultscholle , e.g. Ore Mountains ). As a result, the most diverse forms can be found in the German low mountain ranges, which is also due to the erosion of sediments from the Mesozoic (Triassic, Jurassic, Cretaceous). In some low mountain ranges the sediments are relatively well preserved, in others they have been completely eroded. The determining factor is the geographic location and the associated strength of exogenous processes. A volcanic stamping of some regions took place in the Tertiary z. B. the active volcanoes of the Kuppenrhön , the Kaiserstuhl or the Vogelsberg fall during this time. The most important German low mountain ranges are the Black Forest and the Bavarian Forest.