The Apennines (also in the plural the Apennines ; Italian gli Appennini ) is a 1500 km long mountain range in Italy and San Marino , which runs through a large part of both states, mainly in a north-west-south-east direction. Italy's main watershed runs over the Apennines . It is part of the Alpidic mountain system .

Apennines in Emilia (the Pietra di Bismantova in the background )

Apennines in Abruzzo at Campo Imperatore 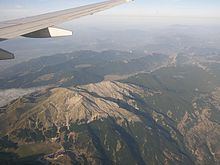 The Monte Titano in San Marino

The Apennines begin in northwest Italy and form the continuation of the Ligurian Alps in the Ligurian Apennines . The Col di Cadibona ( 436  m ) forms the border between the Alps and the Apennines . From there the Apennines stretches east over the Apuan Alps to the Adriatic coast , where it turns south and reaches its greatest height in the Abruzzo Apennines with the Gran Sasso d'Italia massif ( 2912  m ).

Further south, the Apennines are divided into individual smaller mountain parts such as the Sila and the Aspromonte and continue in the mountains of northern Sicily .

The Apennines are an alpine chain mountain range that owes its unfolding to the impact of the African against the Eurasian plate . It consists of lime , dolomite rock , sandstone , slate , marl and clay , partly also of crystalline basement .

In the Apennines there is a typical mountain climate with low temperatures, but strong temperature fluctuations and high levels of precipitation. In the hill country and the foothills, the climate is influenced by the Mediterranean, with rainfall of around 800 mm and a clear summer drought. In the subalpine regions, the amount of precipitation rises to over 1300 mm, with a clear west-east difference.

The vegetation of the coastal regions extends up to about 600 meters, where it merges into a belt of sweet chestnuts and oaks and even higher conifers . The tree line is around 2000 m.

One endemic animal in the Apennines is the spectacled salamander . The Apennine wolf also lives there . The Bardigiano is the native breed of horse.

Several national parks have been designated in the Apennines: