The title of this article is ambiguous. Further meanings are listed under watershed (disambiguation) .

Main watersheds of the earth: the dark gray areas are endorheic ; a large colored text designates one of the five oceans, a small colored text the Mediterranean . 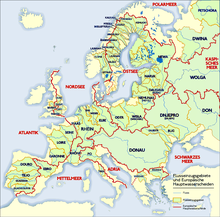 In addition to the waters themselves, watersheds are the most important objects of investigation in limnology , river science. Hydrogeology examines the details in the groundwater flow .

If three watershed lines meet,  a point is created - similar to a three-country corner - which is called the watershed point . Here the water flows into three different river systems. The dividing lines of the large oceanic catchment areas (the different seas ) or the large endorheic hydrographic provinces as well as the streams ( rivers flowing directly into the large standing waters, river order number  1), but also only of a certain region, are called the main watershed, the associated main watershed points form the major hydrographic brands. The two main watershed points in Europe, for example, are 200 km to the west and 300 km to the north-west of Moscow ; the most important watershed outside of Russia is in Switzerland at the Lunghin pass below the Piz Lunghin (river systems of the Atlantic, Mediterranean and Black Sea). The watershed point in the depression, which marks the center of the basin, is characteristic of endorheic areas.

Above and below ground divide

If the border between two catchment areas lies in a valley floor, one speaks of a valley watershed. Valley watersheds are often formed in places where the course of a watershed has shifted over time, for example due to earlier glaciation and / or river tapping with receding erosion .

Where the water flows from a damp valley floor in several directions, this can happen without a continuous channel (seepage water divide) or a body of water releases the water sometimes more in one direction, sometimes more in the other. Then one speaks of a pseudobifurcation .

Examples in the Alps are the Kartitscher Sattel in the Gailtal in East Tyrol , which forms the watershed between the Drau and Gail , and the watershed in the Toblacher Feld between Innichen and Toblach in South Tyrol , where the Drau drains into the Black Sea and the Rienza into the Adriatic . Settlements often emerged at valley watersheds in the Alps. Examples are Eben im Pongau , Kirchberg in Tirol or Waidring .

In the north German lowlands there are extremely flat valley watersheds with heights of less than two meters within the glacial valleys , for example between Havel and Finow in the Eberswalder glacial valley . The Finnish Lake District has no less many wetlands created by the Ice Age with unclearly limited runoff .

Another case is bifurcation (river separation), in which the watershed is in the river bed, in a swamp or in the subsurface. The largest watershed of this type is the bifurcation of the Orinoco in northern South America , whose main course drains into the Caribbean , but also into the Amazon and thus into the South Atlantic via the Brazo Casiquiare .

Where evaporation is often or always greater than the amount of precipitation in flat terrain, i.e. the water mostly or never flows off to a body of water, there is often a lack of slopes and gullies between which a watershed could be defined. But there are also no contiguous wetlands. An example in Central Europe is the north of the Leipzig lowland bay between the Elbe and the lower Saale , more precisely between the Saale tributaries Fuhne and Taube .

Water necessarily never flows into the ocean from catchment areas whose total precipitation is never greater than the evaporation in the long term or in the short term, which means that they never have a positive water balance. The watersheds around these drainage-free areas can in parts be ridge watersheds and in parts run indefinitely through plains. There are rivers within. Their goal can be an inland sea with no outflow, the level of which is below that of the ocean ( Dead Sea and Caspian Sea ) or a swamp delta like the Okawango Delta . The Chad Sea and the Aral Sea show a development from an inland lake to a swamp delta. 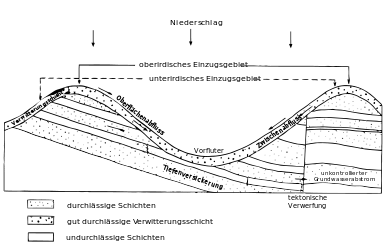 Differentiation of the surface and subterranean watershed

Another special case are the icy watersheds, where (as in the Arctic ) water is transported almost exclusively through glaciers . There, ice currents can migrate far over the escarpments that lie in the deep ground. The meltwater divide is determined by the constantly changing ice surface and the glacier mills, the watershed only reappears at the glacier gate.

Migration of the watersheds

Watersheds, especially if they run on asymmetrical ridges, can be gradually shifted towards the flatter side due to the stronger denudation on the steeper sloping side, which reduces the river area there - in favor of the other, more deeply deepened river system. However, watersheds can also change over a large area in geologically very short periods of time. For example, the Wutach (during the Würm glacial period around 70,000 years ago) diverted the Feldberg Danube, facing east, towards the lower-lying Rhine , west of today's town of Blumberg, due to regressive erosion . As a result, the river system of the Rhine was enlarged, as in other similar cases along the watershed between the Rhine and the Danube. The deserted valley east of today's Wutachknies is now drained by the Aitrach up to the remaining Danube, 18 kilometers away .

Watersheds are also changed by human intervention, both when building canals for shipping and when building power plants  - including tunnels. Examples are the Panama Canal between the Atlantic and the Pacific (leads the water of the Chagres River , crossing the former watershed, also to the Pacific), the Kiel Canal (divides the river system of the Eider ) and the Kaprun power station in the Hohe Tauern south of Salzburg (the meltwater from the Pasterze on the Großglockner naturally drains south, but is now directed to the power station on the north side of the Alps).

Determination and importance of watersheds

The surface watershed can be determined from large-scale topographic maps or aerial photographs . Determining the underground watershed is more difficult. It can be approximately determined on the basis of tracer tests (dyes, salts, etc.).

The watershed and catchment area are relevant to all hydrographic aspects of hydrology. For the ecology watersheds are very important because they are the boundaries by which one can assess the entry of substances into the water. Different ecological regions are also defined based on the boundaries of a catchment area. The Hydrogeologie and geomorphology determines the aboveground and underground water vagina for conducting water balance studies, for example, for the modeling of floods are used. The great mountain watersheds are generally also important climatic divisions .

Politically, watersheds are of secondary importance, as geologically based political boundaries are usually based on geological features such as rivers, mountain ridges or lakes that are difficult to overcome. Exceptions are political boundaries in the area of ​​some glacier areas in mountain regions such as the South American Andes between Argentina and Chile in Campo de Hielo Sur or in the Alps, such as the border between Italy and Switzerland , which had to be corrected again and again at longer intervals. last in March 2009.