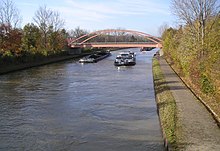 A canal is a waterway with an artificially created water bed . A watercourse with a natural bed of water can also be laid in its course or expanded like a canal so that it then counts as a canal; in earlier times this was more often the case with the smaller ship dimensions.

In the case of a completely covered canal as an underground structure or flowing water, one speaks of piping . The sewer pipes used for sewage or rainwater disposal are also called sewers .

A distinction is mainly made between canals for irrigation and drainage and canals for shipping , the shipping canals. However, there are also channels that serve or served other purposes, such as the supply of drinking water, the use of hydropower , the disposal of sewage or the diversion of water from one body of water to another (e.g. on the Armenian Lake Sevan ; in Germany, is for example, via the Dahme flood canal flood from the upper Spree to the Dahme).

Channels that primarily transport water are flowing water channels. This can include shipping channels. This is the case if they were built in the route of a river or ditch or if they completely or partially replace the route and are regulated by weirs in addition to the locks . Examples of this in Germany are the Finow Canal and the Landwehr Canal . As a rule, shipping canals are still water canals. As a result of locks and due to water abstraction (e.g. for the public and industrial water supply on the West German shipping canals ) they can still have a low current. Their water levels are regulated by locks and pumping stations. There are also channels without any regulation.

A canal is mostly excavated from the natural ground using natural depressions and watercourses and is deeper than the terrain. However, it can also be built on dams and thus lie above the surrounding area. Such sections can be secured by security gates in order to avoid major water losses and flooding in the event of leaks or dam breaks, for example at the Dortmund-Ems Canal . A canal can cross other canals or rivers with canal bridges ( waterway cross ) and lead through mountains in tunnels. A canal can be a water supply canal that is less than a meter wide and a canal that is more than 300 meters wide for shipping.

Shipping canals usually have a bank secured by vertical sheet pile walls or rock fillings made of armourstones, since the embankments are otherwise often eroded by the waves of the ship's passages. Above the waterline, normally grass-covered slopes with technical standard profiles usually follow if the adjacent terrain is not level. Since canals do not usually have to discharge floods , buildings can be connected directly. A stronger water current is undesirable in shipping canals, so their gradient is minimal or absent. Locks are therefore inserted to overcome differences in height . Shipping canals therefore usually consist of a chain of stowages without a gradient, each of which is delimited on both sides by a lock. If a canal runs in the plain, the locks are unnecessary. The river bed of canals is now often sealed by technical expansion in order to prevent water loss through seepage, which was usually not the case with historical canals.

The classification of a body of water as a canal has significant legal and financial consequences. The Europe-wide Directive 2000/60 / EC (Water Framework Directive), for example, defines canals as "artificial and significantly modified surface waters". For artificial bodies of water, lower standards and requirements apply to the ecological status that the operator of the body of water must strive for.

A body of water is "artificial" if it was created in a place where there was previously no body of water (by nature). There are extensive sets of rules for the existence of a "significant change" in a natural surface water body. A dam-regulated flow such as B. the Main used to be called "canalized", this is outdated today. Despite its major changes, it remains a river .

Canal in the city

A typical canal in Venice

In cities that are close to a flat sea ​​coast , canals are used for drainage and as transport routes. The canals are usually limited by vertical edging or reach directly up to the houses.

Venice (see also Canal Grande ) and some cities in the Netherlands and Belgium with their canals , for example Amsterdam and Bruges , as well as Friedrichstadt in Schleswig-Holstein, are known for their canals . The Navigli of Milan used to connect the city with the surrounding rivers and lakes. Even Birmingham in England is to be mentioned here. Although there are no major rivers flowing through Birmingham, the city is the hub of the Central England narrowboat canal system ( Midlands ). Within the city limits there are canals with a total length of 60 kilometers. It is often said that Birmingham has more canals than Venice (although the city area is also quite a bit larger).

Unlike the canal was in Fleet (for example, in Hamburg ) originally not regulated the water level by locks, but fluctuated with the Tide .

In cities, the rivers are largely canal-like. Some were also relocated or “divided”, such as the Danube and Danube Canal in Vienna .

Canal in the country 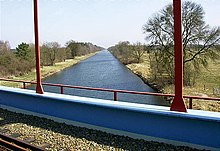 As on the road, water traffic is regulated by signs. In some countries, road signs on the waterway are square

A canal can be used for transport - today especially for shipping  - in earlier times it can also be used to transport wood (raft canal, Trift ) or peat ( Fehn canal). Other channels are used for irrigation or drainage, for the use of water power ( mill , power station , factory channel ), with combined uses of course also being possible. Many canalised rivers are used both as transport routes and to generate hydropower. Another important area of ​​application are irrigation canals / floodlights for irrigation and drainage canals / receiving waters for drainage .

Channels are divided into more or less long dewatering sections called attitudes , in which the water is retained between the channel levels respectively at the same level. Canal steps are formed by locks or lifts that enable ships to negotiate the height difference between the canal supports .

The abbreviation canal or puncture is a stretch of river with an artificial water bed, through which one or more loops of a river lying one behind the other are cut off and thus the shipping route is shortened. Examples of this can be found here:

Side channels come in two variants:

As far as such channels flow into a sea, they are included under sea channels.

A connecting channel connects two bodies of water and can be designed in three variants:

A watershed channel overcomes a watershed between two bodies of water in ascending and descending steps . In addition to the challenge of selecting suitable sections of the terrain for the reservoirs, the water supply must usually also be secured. In many cases, this means creating a network of watercourses and water reservoirs in the neighborhood in order to compensate for the loss of water through sluicing . Examples for this are:

The sea channel can appear in three variants:

However, not every marine channel can be clearly assigned to one of these three categories, as some channels also fulfill several functions. For example, the Nieuwe Waterweg in Rotterdam has belonged to the first variant since it was built, but has now also been part of the second, since the old arms of the Meuse are no longer navigable. The Royal Military Canal on the south coast of England circumnavigates a cliff on the land side and runs 28 miles from Seabrook at Folkestone to Cliff End at Hastings .

The Assyrians and Syrians already drove tunnels and canals through rocks and mountains to supply water. Sennacherib had in the 7th century BC Establish a drinking water canal at least 55 km long to supply Nineveh , with locks and a large aqueduct .

In Egypt, Pharaoh Necho II (reigned 610-595 BC) began building a shipping canal , also known as the Bubastis Canal , between the Nile or Mediterranean and the Red Sea, but it was probably only under the Persian King Darius I. in 498 BC Was completed. Around 280 BC The Diadochian ruler Ptolemy II Philadelphos (284 to 246 BC) had the canal restored and a floodgate built into the Red Sea . This forerunner of the Suez Canal fell into disrepair in the 1st century BC. BC, but was restored under the Roman Emperor Trajan in the 2nd century AD. The canal was in use with restrictions until the late 8th century AD.

The Persian great king Xerxes I had 483-480 BC In preparation for his campaign against the Greeks (480 BC) , build the Xerxes Canal on the Chalkidiki peninsula to spare his fleet the dangers of going around Mount Athos.

The largest ancient canal in the Middle East was the Nahrawan Canal along the Tigris near Ctesiphon . It came from the 3rd century, was 400 km long and 122 m wide.

In China it was probably from the 6th century BC. The Hong Gou Canal was the first man-made waterway. A better known technical achievement, however, was the Magic Channel ( Líng Qú ) from the time of Qin Shihuangdi around 219 BC. BC, who  tamed and connected two oppositely flowing rivers -  Li and Xiang . It was planned by Shi Lu, initially served to supply troops and was the first canal that was led along contour lines in uneven terrain (32 km long). The Chinese Imperial Canal is over 1700 km long and often 30 m wide with a height difference of approx. 42 m.