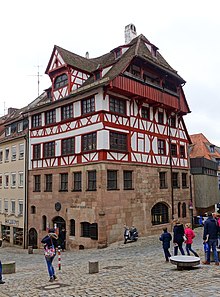 Back of the historicist room based on a design by W. Wanderer

The Albrecht Dürer House in Nuremberg's old town (on the Sebalder side, near the Tiergärtnertor ) is a medieval house that was built around 1420 and got its current appearance through the modernization that Bernhard Walther had carried out after 1500. From 1509 Albrecht Dürer lived and worked until his death in 1528. The artist lived there with his wife Agnes , his mother Barbara and an unspecified number of apprentices, journeymen and domestic workers. The house is open to visitors as a museum and, together with the graphic collection , which holds the special exhibitions in the Albrecht Dürer House with works from its holdings, belongs to the network of museums of the city of Nuremberg .

The oldest beams in the house on the corner of the former Zistelgasse to the square in front of the Tiergärtner Tor could be dendrochronologically dated to 1418, which suggests the construction of the stately building around 1420. It has four storeys, of which the lower two are made of sandstone and the two upper ones are half-timbered . The half-hip roof carries a dwelling on the street side . It was reconstructed in the 19th century because it was suspected, very probably wrongly, that Dürer's workshop was there.

In 1501 it was bought by Bernard Walther , a merchant and astronomer. The current shape of the house in the upper floors and in the roof area is largely due to his renovations. In particular, he had several small windows attached to the “gewergk der astronomey ” in the south gable facing the city . In the Nuremberg City Archives there is a contract with the neighbors in which they were forbidden to pour anything from the new windows onto the neighboring roof. The use of the house as an astronomical observatory can be seen on historical views. 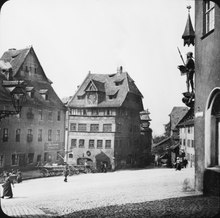 View of the Albrecht Dürer House, with Saint George of the Pilatushaus on the right in the picture, 1907

According to the still existing purchase agreement, the Walther family sold the house to Albrecht Dürer in 1509 for 275 guilders . Although it changed hands at least 24 times afterwards - a carpenter lived in it in 1791 - it remained in the general consciousness as Dürer's house . Joachim von Sandrart , an important baroque painter, Dürer admirer, founder of the Nuremberg Academy and author of the first German art history, described his situation in 1675 in the section on Dürer so precisely that anyone interested could find it. With a view to the celebration of the 300th anniversary of Dürer's death in 1828, the city of Nuremberg acquired the house in 1826 and had a memorial room installed in it. In 1871, on the artist's 400th birthday, the use and maintenance of the house was transferred to the Albrecht Dürer House Association, which has been running it as a memorial and museum ever since.

Despite severe damage, the Dürerhaus survived the almost complete destruction of Nuremberg's old town at the end of the Second World War surprisingly well. It was opened to the public again in 1949, before the large city churches, the town hall and the city library. For the big anniversary exhibition on the occasion of Albrecht Dürer's 500th birthday, the house received a modern extension on the west side in 1971. Its core is a large exhibition room, which was converted into a cinema in 1996/98 . In the meantime this room has been used for lectures; Today it serves as an exhibition space in which historical copies of Dürer's paintings (paintings owned by the municipal art collections) are permanently shown, which give the visitor an impression of Dürer's versatility.

Thanks to extensive renovation measures since the 1990s, the house is in a very good state of conservation. Research into building history has also made great progress.

The Albrecht-Dürer-Haus is a striking corner house at the upper end of Albrecht-Dürer-Strasse (formerly Zistelgasse), house number 39, which borders on the Tiergärtnertorplatz . That is why this square, which with its largely preserved building stock is one of the most beautiful squares in the city center, is often incorrectly referred to as Dürerplatz , although the square with this name with the statue of Albrecht Dürer is located further south on the former milk market , above the Sebalduskirche , Dürer's parish church. From the windows of the Dürer House you have a direct view of the Imperial Castle, which is why people often speak of the Dürer House at the foot of the Imperial Castle .

In its entirety, the Dürer House is a memorial for one of the most outstanding visual artists in early modern art history. It has been run as a museum since 1871.

The large hallway on the ground floor leads to the first floor, where there is a largely original kitchen and the two so-called Wandererzimmer , two living rooms that were modeled in the 1870s by Friedrich Wanderer in a historicist-neo-Gothic style with the sequence of room and chamber typical of the late Middle Ages. The largest room in the house is on the second floor. Because of its dimensions and the uniform northern lights, it could have been Albrecht Dürer's workshop. There you can see painting tools and materials as well as devices for printing, as they were already in use during the Dürer period. The most important printing processes of the Dürer era - woodcut and copperplate engraving - are also demonstrated here and in a room opposite.

Due to the long history of the house as a museum and memorial site, Albrecht Dürer's afterlife in the art and cultural history of later centuries has always been a special collection and exhibition topic. In the gallery rooms on the top floor, the redesign of which is planned for the near future, copies of important works by Dürer as well as changing exhibitions - including original works by Dürer - can be seen. Above all, this is the place where the rich holdings of the city's graphic collection can be shown.

A multi-vision show is currently introducing the artist's life and work in the modern extension. Furthermore, the house is made accessible through extensive information boards , demonstrations of printing techniques, an audio guide tour and “ Agnes Dürer ” tours in historical costumes. The house is also the highlight of the “Dürer Way”, which was created in 2004 in the form of an audio guide as a historical city walk in the footsteps of Dürer.

From August 2009 to March 2019, the art historian Thomas Schauerte was in charge of the Dürerhaus and the graphic collection .