Interior view of the Katharinenruine 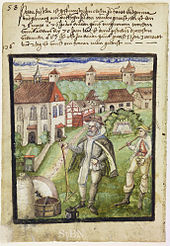 The monastery area in the house book of the Mendelscheln Twelve Brothers Foundation , 1587

The Katharinenkloster Nürnberg is a former women's monastery of the Dominican Order in Nuremberg in Bavaria in the diocese of Bamberg, famous for its medieval library .

The monastery was founded in 1295 by Konrad von Neumarkt and his wife Adelheid from the Nuremberg patrician family of the Pfinzing von Henfenfeld . The monastery church, which is also remarkable for its structural features, was consecrated in 1297. The monastery became of particular importance in the course of the church reform efforts of the early 15th century, when it was reformed in 1428 by the Schönensteinbach monastery and accepted strict rule observation , not least at the instigation of the Nuremberg Council . From then on a flourishing spiritual and spiritual life developed, so that the monastery soon assumed a leading position among the Dominican convents in the province of Teutonia. Numerous other monasteries were reformed from the Katharinenkloster. However, after the imperial city of Nuremberg had joined the Lutheran Reformation , the convention was doomed to extinction after 1525 despite attempts to resist. After the death of the last members of the monastery in 1596, the monastery was closed.

From then until 1620 the monastery buildings were used as a meeting room for the Nuremberg Mastersingers , who were then housed in the Katharinenkirche until 1778. In 1699 the Academy of Fine Arts, founded in 1662, moved into the building and held its lectures there until the end of the imperial city period in 1806. The former monastery thus became one of the most important places for art education in schools in Germany during the Baroque period.

Thereafter, the rooms were used for changing secular and cultural purposes, including as a political meeting place during the revolution of 1848 and as a temporary exhibition space for the Reichskleinodien (1938/39) during the National Socialist era. After it was destroyed by air raids in 1945 , the former St. Katharina's monastery church has been used for events such as open-air concerts since the ruins were secured in 1970/71 because of its special acoustics .

The St. Katharina Open Air , where international and national musicians perform for several weeks, takes place annually in July and August . The repertoire ranges from blues to rock'n'roll to hip-hop, for example.

The former Katharinenkloster is of lasting importance due to its library. Compiled from various sources, including with the help of our own scriptorium , it is the largest documented German-speaking monastery library of the 15th century with its approx. 500–600 verifiable volumes. Based on the information in the library catalog that was preserved at the time and numerous other identifiable codices, this library can serve as a basis for research into numerous aspects, especially the history of piety and literature, as well as general cultural and social history. A research project to provide the necessary sources has existed since 2006 at the University of Erlangen.

St. Katharina, the meeting place for the Mastersingers between 1620 and 1778 , is a traditional part of the First Scene in Wagner's opera Die Meistersinger von Nürnberg .

Sacred buildings in the old town of Nuremberg ( St. Lorenz and St. Sebald )