Altstadt is a redirect to this article. For more specific meanings, see Old Town (disambiguation) .

Also reconstructed building ensembles such as the World Heritage part of Warsaw's Old Town , the buildings along the Brühl's Terrace and the Neumarkt in Dresden or rebuilt tradition Islands as the marketplaces of Braunschweig , Frankfurt , Hildesheim and Potsdam , the cathedral square of Freiburg be and surrounding preserved or reconstructed district referred to as historical city centers.

On the basis of the properties of city centers, different city types can be determined according to functions or building types, such as Gothic cities, residential cities, half-timbered cities, garrison cities, Hanseatic cities or spa towns.

Information sign on the historic city center in Germany 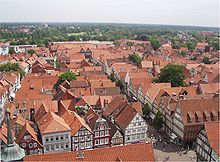 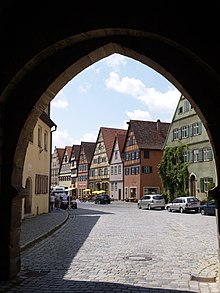 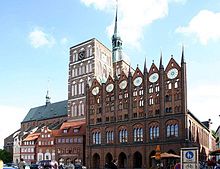 In general, the oldest contiguous parts of a city are referred to as the historical city center, especially in pre- modernist cities (i.e. city centers built before the 20th century). The oldest parts of city districts that later grew together or were incorporated into another city, such as Cölln opposite Alt-Berlin , Spandau in the western part and Alt-Köpenick in the eastern part of Berlin, the Essen district of Kettwig , Frankfurt-Höchst are also referred to as historical city centers , the Lesser Town in Prague or the Buda district of Budapest .

A historic center are also part of suburban cores from post-medieval periods to the early days . The historic city plan with its characteristic townscape (streets, squares, parcels, legible area boundaries) should still be preserved and a historical building fabric that is partially or completely under monument protection should be present. The historic city center is characterized by its public buildings, such as churches, castle , palace , fortress , town hall , granary , patrician house castles with dynasty towers through its city silhouette, the public spaces (squares, streets, green and water areas) and its topography in one Cultural landscape. The appearance in its entirety is also known as the cityscape .

The historic city ​​center is the oldest part in terms of settlement history and is characterized by very dense building structures, mostly winding streets and historical buildings such as half-timbered houses . The historic city center can often be identified on maps by the fact that it is surrounded by streets or places that indicate the existence of a city ​​wall or fortifications (streets with a gate , wall or wall in their name). These features emerged from the medieval cities that were surrounded by fortifications such as ramparts and walls. The rest of the city then usually grew around the enclosed city center.

It often forms the area of ​​the city visited by tourists and shown by residents. Pedestrian zones, strict building regulations and protective regulations try to take this into account. Due to the idea that the historical city center also embodies the city center, this inevitably leads to conflicting goals between economic requirements and conservation efforts. The current trend of building shopping centers outside the historic town center at locations with better transport connections (motorway connection) relieves the historic core of economic pressure, results in a low population density and weakens financial potential.

The term old town serves within historical city centers to delimit city extensions (which are then often called Neustadt ) to an urban area that already existed at the time of the expansion. The term is also used as the official name of administrative units or city districts. Examples are the old town of Königsberg , Salzburg , Frankfurt-Altstadt or the old town of Prague .

Numerous types of urban development can be named in their peculiarity and can still be recognized today in their layout or in growth ( urban history ) based on the core substance ( urban morphology ) that has been preserved .

Cities with a historic city center

→ Main article : List of cities with a historical city center in Germany 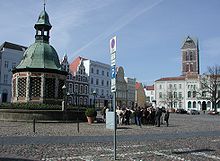 Water art on the market square in Wismar

In Germany, municipalities with a historic city center are supported by the urban monument protection program as part of urban development funding. In Brandenburg there is the working group “Cities with historic city centers” . On June 9, 2010, the then Federal Minister Peter Ramsauer informed the members of the Bundestag Committee for Transport, Building and Urban Development that the federal funds for urban development should be reduced by 50% in the subsequent federal budgets - the amount of urban monument protection would be 50 million euros per year affected. These funds are usually increased by the federal states, municipalities and funding institutions to double to triple the amount in addition to the project, which is then also omitted. The chairman of the German Foundation for Monument Protection, Gottfried Kiesow , warned of deforestation in a press release. “The halving of the program funds for urban development funding announced by Federal Minister Ramsauer is a mistake. The cut endangers the preservation of our cultural heritage ”.

Many cities in the eastern regions of the German Reich were destroyed by bombings or as a result of sieges during World War II. B. Königsberg , Danzig (extensively rebuilt), Breslau , Gleiwitz and Stettin . Historic city centers also have other cities formerly in German-speaking areas of the Holy Roman Empire , such as Krumau ( Český Krumlov , Czech Republic ) or Strasbourg ( France ). However, some town centers have been preserved and restored. In 1997 the medieval old town of Toruń ( Toruń in Poland) was declared a UNESCO World Heritage Site.

Linz main square - the old town begins on the left

Smaller cities with historic city centers have merged to form the Small Historic Cities . The following cities currently belong to this association:

See also : Inventory of places worth protecting in Switzerland  and list of cities with a historic city center # Switzerland

Bern and the Aare

All historical city centers of places are listed in the inventory of Swiss places worthy of protection (ISOS) and sorted according to place pictures of local, regional and national importance.