The title of this article is ambiguous. Further meanings are listed under Rheinsberg (disambiguation) .

Rheinsberg is a town in the Ostprignitz-Ruppin district in Brandenburg am Rhin . The core city with the districts of Kleinzerlang and Flecken Zechlin has the title of state-approved resort . Rheinsberg is one of the largest municipalities in Germany in terms of area.

The history of the place is mainly related to Rheinsberg Castle . Rheinsberg became known through the book Rheinsberg: A picture book for lovers by Kurt Tucholsky and by the mention in the walks through the Mark Brandenburg by Theodor Fontane . It is located in the Neustrelitzer Kleinseenland holiday area in the Mecklenburg Lake District . 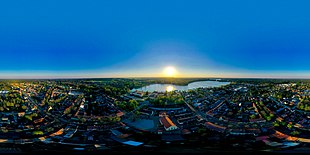 Rheinsberg from above
Show as spherical panorama

Rheinsberg from above, east
as a spherical panorama

Rheinsberg belongs to the Ruppiner Land . It is located in the Rheinsberg Lake District , the southwestern part of the Neustrelitz Kleinseenland , between many large and small lakes (the main town on the Grienericksee ) and in a varied, hilly forest landscape. To the south of Rheinsberg is the Ruppiner Schweiz , in the west extends the rest of the Wittstock-Ruppiner Heide , which was partly used as a military training area for Wittstock .

Evangelical Church of St. Laurentius in Rheinsberg, in the foreground the market square with the memorial stone for the fallen of the First World War.

The city of Rheinsberg consists of 17 districts, plus a number of other districts and residential areas:

Linow from above
Show as spherical panorama

Inhabited parts of the community

According to popular opinion, Rheinsberg got its name from settlers from the Lower Rhine region during the eastern colonization in the 12th century. An independent Germanic education from the same root word for "rinnen, flow" cannot be ruled out. Although the area around the river was inhabited by Slavs for several centuries , a Slavic name has not survived.

The area around Rheinsberg was settled very early. Settlement remains were found on the island of Remus in the Rheinsberger See . In 1524 Rheinsberg came to the Mark Brandenburg with the rule of Ruppin . Rheinsberg is inextricably linked with Rheinsberg Castle and the ruling family of the Hohenzollern . Since the acquisition of Rheinsberg by the Prussian King Friedrich Wilhelm I and after the city burned in 1740, the city and palace (originally a Renaissance building from 1566) have been rebuilt by the builders Johann Gottfried Kemmeter and Georg Wenzeslaus von Knobelsdorff . The residential palace of Frederick the Great is considered a model building of the Frederician Rococo and served as a template for Potsdam - Sanssouci . In the local crown prince chapel, Carl Philipp Emanuel Bach worked as chamber harpsichordist for Frederick II. Through the renovation and expansion of the palace, Rheinsberg developed into a small baroque residential town.

In 1762 one was manufactured for earthenware founded which soon became the largest in Prussia belonged.

After Friedrich II became king, he ceded the property to his brother Heinrich , who lived in the castle until his death (1802) and had it expanded and rebuilt.

1966 was close to Rheinberg on Great Stechlinsee the nuclear power plant Rheinsberg commissioned. It shaped the city as the largest employer until it was shut down in 1990.

Rheinsberg has been a state-approved resort since 1968 . Later, Kleinzerlang (since 2004) and Flecken Zechlin (since 2011) were included in this rating without the districts being adjacent to one another.

In addition to the full-time mayor, the city council has 18 members. After the local elections on May 26, 2019, these are divided between the parties and groups as follows:

Schwochow was elected in the mayoral election on October 15, 2017 with 50.5% of the valid votes for a term of eight years.

Blazon : "In the red and silver split shield an eagle in confused colors, covered with a silver and black quartered heart shield."

Rheinsberg has had partnerships with Ascheberg in North Rhine-Westphalia since 1991, Fangasso in Mali since 1994, Huber Heights in the USA since 1995, Mariefred in Sweden since 1994 and Toftlund in Denmark since 1995. 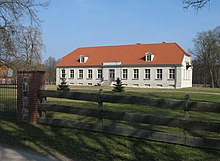 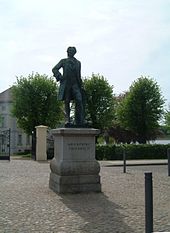 Rheinsberg has a long cultural tradition. It goes back to the then Crown Prince Friedrich, who gathered around himself artists and musicians.

The art and culture association Rheinsberg e. V. (KuK) wants to preserve the baroque residence town and the palace complex including the palace theater, cavalier house and palace park as a cultural monument of historical importance and develop it further as an artistic and cultural center in the Mark Brandenburg.

Since 1995, in memory of Kurt Tucholsky, the city has been awarding two five-month scholarships of 5,000 euros annually for its city ​​clerks . It is connected with the free accommodation in the Rheinsberg town clerk's apartment in the stables of the castle. Just as the city of Rheinsberg has "committed itself in a special way to the work of the great humanist", the town clerks are expected "that they too [feel] committed to Tucholsky's democratic legacy" ( guidelines for awarding the scholarship "Stadtschreiber zu Rheinsberg" ). "Non-German authors who live in exile in Germany" should also be expressly funded.

Railway track leading to the nuclear power plant near Beerenbusch

Rheinsberg has had a train station on the Löwenberg-Lindow-Rheinsberger Railway since 1899 . On the regional train line RB 54 of the Niederbarnimer Eisenbahn to Löwenberg (Mark) five pairs of trains run in the winter half-year and six in the summer half-year. Individual journeys start or end in Berlin at the Lichtenberg and Gesundbrunnen train stations . Between 1928 and 1945 there was also a continuation of the line to Flecken Zechlin and from 1958 to 1996 to the nuclear power plant on the Großer Stechlinsee.

Rheinsberg can be reached with a PlusBus and other regional bus routes through the Ostprignitz-Ruppiner local public transport company.

Rheinsberg is located on the federal road 122 from Alt Ruppin to Wesenberg and on the L15 state road between Wittstock and Fürstenberg / Havel . Wittstock and Neuruppin are the closest motorway junctions to the federal motorway 24 .

The Rheinsberger See is navigably connected to the north by water with the Mecklenburg Lake District . The connection to the south via the Rhin to the Ruppiner See is limited to small craft and time.

Because of the castle and the charming surroundings, tourism plays a major role , especially as a local recreation area in the catchment area of Berlin . The "Hafendorf Rheinsberg" with water hikers' resting place on the Rheinsberger See and the barrier-free Hotel Seehotel Rheinsberg of the non-profit Fürst Donnersmarck Foundation (Berlin) on the Grienericksee contribute to the development.

Cities and communities in the Ostprignitz-Ruppin district