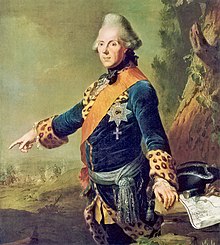 The sons of King Friedrich Wilhelm: Crown Prince Friedrich , August Ferdinand , August Wilhelm and Heinrich (from left to right), around 1737; Attribution to Francesco Carlo Rusca or Georg Lisiewski is disputed

Prince Heinrich of Prussia, portrait by Antoine Pesne around 1745

Prince Friedrich Heinrich Ludwig of Prussia (born January 18, 1726 in Berlin ; † August 3, 1802 in Rheinsberg ) was the 13th child of King Friedrich Wilhelm I in Prussia and his wife Sophie Dorothea of ​​Hanover and a member of the Hohenzollern dynasty .

Under his older brother, King Friedrich II , Heinrich became colonel in command of Fusilier Regiment No. 35 (existed until 1806) and took part in the War of the Austrian Succession . Throughout his life he remained in the shadow of his older brother, whose military strategy and foreign policy he repeatedly criticized; about 1753 in a memorandum under the pseudonym Maréchal Gessler.

In the Seven Years War (1756–1763) he served successfully as a general. With the Battle of Freiberg on October 29, 1762, he was able to win the last major battle in the war and thus decisively influence the outcome of the war. The king praised his brother for this: “The good news have rejuvenated me by twenty years; yesterday I was sixty, today I am eighteen. You render such serious service to the state that I cannot thank you enough and reserve the right to do so personally. "

Afterwards, Prince Heinrich worked as a skilled diplomat and prepared the First Partition of Poland on a trip to Stockholm and Saint Petersburg in 1770/71 . In doing so, he always tried to gain control for himself. The crown of Poland was offered to him twice, which, however, displeased Frederick II.

During the first partition of Poland, Frederick II sent Prince Heinrich to Saint Petersburg in order to make the Prussian rounding off plans attractive to the Russian Empress Catherine. The mission was successful because Russia and Prussia agreed on the division of territories on February 17, 1772. Austria followed on March 4th. The formal partition agreement was then signed on August 5, 1772 in Saint Petersburg. However, Frederick prevented Heinrich from gaining control of a kingdom in Wallachia planned by Tsarina Catherine II .

Even the governorship of the American colonies of England was promised, until they declared themselves independent in 1776 ; During the revolutionary struggles , General von Steuben , possibly also Congress Chairman Gorham , brought him into discussion with George Washington's comrade in arms Alexander Hamilton as President or even King of America, while Washington's successes against the Hessian mercenaries of the British at Trenton and Princeton were praised by Frederick II were. The proposal was withdrawn before Heinrich could comment on it. In the same year Heinrich traveled again to Russia; When the wife of the heir to the throne Paul died in childbed during his stay , Heinrich arranged his second marriage to Sophie Dorothee von Württemberg , a granddaughter of his sister. In 1784 he traveled to the court of Versailles .

After Friedrich II died in 1786, Prince Heinrich hoped to have more influence on Prussian affairs of state by acting as an advisor to his nephew and new King Friedrich Wilhelm II . These plans did not come true to the extent he had hoped. He made a second stay in Paris from October 1788 to March 1789, only a few months before the storming of the Bastille . His hopes for reforms by the Estates General and a financial reform that he discussed with Necker (with the abolition of tax exemptions for the nobility and clergy) were not fulfilled.

During the Revolutionary War , he wrote numerous political and military memoranda, but these were seldom heeded by his nephew and his ministers. Again and again he spoke out in favor of peace with revolutionary France, from 1796 even for an alliance with the Directory . In the last years of his life, however, he had a little more influence on his great-nephew, Friedrich Wilhelm III , who had ruled since 1797 . In November 1800 Louis Bonaparte visited him in Rheinsberg.

The Englishman William Wraxall described the prince in the following words:

“He is inconspicuous in person and devoid of any outward grace. Cold by nature and of silent beings, he can nevertheless occasionally make a winning impression through the liveliness of his conversation. "

Gerd Fesser and the Berlin historian Eva Ziebura report on the "man-loving" Heinrich and his "preference for men" as well as numerous lovers. In March 1746 he received four letters from his royal brother, which were marked by jealousy for the "beautiful Marwitz", Heinrich's chamberlain. Heinrich married Princess Wilhelmine of Hessen-Kassel on June 25, 1752 at the instigation of his brother , but - similarly to his brother - led a life apart from his wife for the most part.

In Berlin , his royal brother had Prince Heinrich's palace built for him and his wife from 1748 to 1753 , which now houses the Humboldt University in Berlin . Heinrich lived in one of the two broad side wings, Wilhelmine in the other; Encounters could be avoided by having separate entrances and stairwells. He also had an apartment in the Potsdam City Palace. But every year he spent most of the time in Rheinsberg Castle , which his brother had given him in 1744 and whose park he had extensively expanded; He also had the new palace theater built in 1774 and played with actors during his presence, concerts were held and numerous visitors formed a small court; the king also often came to visit.

Heinrich's temporary favorite, the officer Christian Ludwig von Kaphengst (1740–1800), whom he had appointed adjutant, drew him back to Berlin more often. Kaphengst, who was described by Thiébault in his memoirs as a tall, happy, courageous and spirited man of extraordinary physical strength, who could make any society laugh, increasingly exploited the prince's favor financially and otherwise dominated the small, slender prince. In 1774 he bought and gave him Meseberg Castle , now a guest house of the Federal Government, along with three other goods and furnished it generously, for which he sold 29 paintings from his collection to Catherine the Great . He also made savings on his own household and that of his wife. In Meseberg, a spiral staircase between the master's bedroom and the prince's guest room has been preserved to this day. When Kaphengst finally urged Friedrich II to be promoted to colonel, he received a rude refusal and took his leave. The extravagant cape stallion pledged his goods and Heinrich had to borrow 130,000 thalers in France in 1784 to pay off the debts, King Louis XVI. personally vouched for it. Heinrich now parted ways with Kaphengst.

Heinrich of Prussia was an active member of the Freemasons . He often corresponded with the French Mère-Loge Écossaise de France in Paris .

The prince's military training began in September 1740 by Colonel von Stille . With this the prince accompanied the Prussian army in the First Silesian War and took part as an adjutant in the battle of Chotusitz . From May 1744 he finally received permission to exercise his fusilier regiment (No. 35) personally . During the Second Silesian War he was almost captured near Tábor . He then proved himself in the battle of Hohenfriedberg . Promoted to major general on July 15, 1745 , he distinguished himself through a successful battle in retreat near Trautenau. When he fell ill with smallpox , he had to leave the army early.

When the Seven Years' War broke out in 1756, Heinrich commanded a brigade to march into Saxony . On February 16, 1757 he was promoted to lieutenant general. In the Battle of Prague he was able to bypass the opposing position on the right wing and thus contribute decisively to the victory. For this he was admired by officers and soldiers alike. After the defeat at Kolin , he led the retreat to Saxony with Field Marshal James Keith and distinguished himself in the battle near Leitmeritz. In the following battle near Roßbach Heinrich commanded the right wing, which led the decisive attack. An injury forced him to stay in Leipzig until the spring of 1758 .

Prince Heinrich of Prussia (around 1780), portrait by Anton Graff

After his recovery, Prince Heinrich led an independent command in Saxony, where he held the Elbe line through a war of maneuvers against the Austrians and the Imperial Army . In the spring of 1759 he operated offensively against the imperial army and made expeditions to the Main and to Franconia . After Friedrich's defeat without consequences in the battle of Kunersdorf , he was very active, pushed an Austrian corps under Karl de Ville back to Bautzen , defeated another at Hoyerswerda on September 25 and another on October 29 at Pretzsch .

In 1760 he became commander in Silesia, where he appalled Breslau and successfully prevented the unification of the Russians and Austrians. In autumn he fell ill and then took back command in Saxony in 1761. He operated successfully and won the last battle of the war on October 29, 1762 near Freiberg .

The campaign in Saxony ended with the battle. The success of the Prussian battle led to a willingness to peace on all sides. Not without self-criticism, Frederick the Great admitted to his brother that he was the only general who had not made a mistake in the course of the war.

Prince Heinrich also commanded an army in the War of the Bavarian Succession in 1778, but remained largely inactive, which led to another break with his brother Friedrich II.

As a general, he was always more prudent and cautious than Frederick II, whom he accused of having fought battles in his entire art of war . That is why the prince's campaigns were more defensive in nature, but cost far fewer lives than his brother's offensive undertakings. His staff, from which General Field Marshal Kalckreuth emerged , and later his court in Rheinsberg, were meeting points for the critics of Friedrich II. The officers who were misunderstood or treated with disgrace by Friedrich he erected a memorial with the Rheinsberg obelisk . In 1802, the year of his death, he had a broken pyramid built as a tomb for himself in the park.