from Wikipedia, the free encyclopedia
Battle of Freiberg
Part of: Seven Years War

The Battle of Freiberg in Saxony on October 29, 1762 was the last major battle in the Seven Years War .

In 1762, after the death of Tsarina Elisabeth , Russia left the war; Prussia was rescued from its seemingly hopeless situation. The war was not yet decided, however, as Austria and the Imperial Army continued the fighting.

In Saxony, Prince Heinrich of Prussia initially operated successfully against the Imperial Army (see battle near Döbeln ). Due to the defeat of General Seydlitz near Teplitz on August 2, 1762, however, he found himself in a difficult position: a large part of Saxony was threatened with loss. Friedrich II , however, insisted that Saxony should remain largely in Prussian hands. The occupied territories of Saxony should serve as exchange objects for the future peace congress.

Prince Heinrich had 24 battalions, 7 Frei battalions and 72 squadrons at Freiberg (i.e. 15,636 infantry and 7,021 cavalry, a total of 22,657 soldiers). The Imperial Army, under the command of Prince zu Stolberg-Gedern, comprised 45 battalions and 74 squadrons (a total of 31,000 soldiers), and Prince Albert of Saxony's corps was expected as reinforcements. 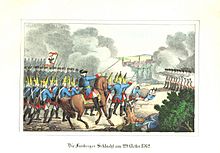 Prince Heinrich decided to battle to drive the Imperial Army out of Saxony. On the night of October 28-29, the Prussians advanced in four detachments against the enemy, who had set up a fortified camp.

General von Belling led the first attack in which he could take a hill. A battery could be deployed there to fire on the enemy right wing. Now the Prussian avant-garde advanced via Wegefarth and Oberschöna . They drove out hussars posted there in order to then turn against the left flank of the Imperial Army. The Reichsarmee did not evade this circumvention, but only led an artillery battle.

The Prussian infantry meanwhile took the approaches to the enemy position. An attack by the Prussian cavalry under General von Seydlitz finally threw back the infantry of the Imperial Army. After two hours the battle was over, although it was fought stubbornly on both sides. The Imperial Army had to go back over the Mulde.

The campaign in Saxony ended with the battle. The king praised his brother for the news of victory: “The good news have made me twenty years younger; yesterday I was sixty, today I am eighteen. You are doing such a serious service to the state that I cannot thank you enough and reserve the right to do so personally. ”He also states:“ With this victory you will be able to claim the glory for yourself, the Austrian tenacity the final blow In fact, the situation of the Imperial Army and the Austrians in Saxony had become untenable. The success of the Prussian battle led to a willingness to peace on all sides. Not without self-criticism, Frederick the Great admitted to his brother that he was the only general who had not made a mistake in the course of the war.